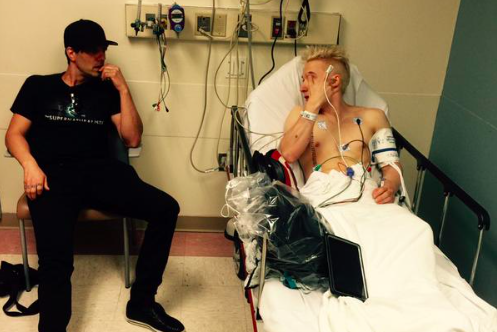 Criss Angel posted a photo to Twitter of Spencer Horsman recovering in the hospital.

Horsman, who was performing alongside magician Criss Angel, was unable to escape a water-filled Plexiglas box during the event at the State Theatre in New Brunswick. He was suspended over Livingston Avenue in the 30-inch box and covered in locks.

Officials said rescuers had to lower a crane and pull him out. He was taken to Robert Wood Johnson Medical Center.

In an Instagram post on Monday, Horsman previewed the stunt, acknowledging that it has gone wrong in the past.

Don't miss my public performance of "Submerged" (the escape that almost cost me my life a couple months ago) live in front of the State Theater in New Brunswick, NJ, at noon! I will be alongside non other than @CrissAngelhimself & @LandonSwank from @thesupernaturalistslive!

The post included a video of Horsman being saved from the box during a previous attempt.

Horsman is a former contestant on NBC's "America's Got Talent."