The brewing company will be hosting a charity 0.5K with The Hogwarts Running Club on March 12, followed by a drag bunch on March 27 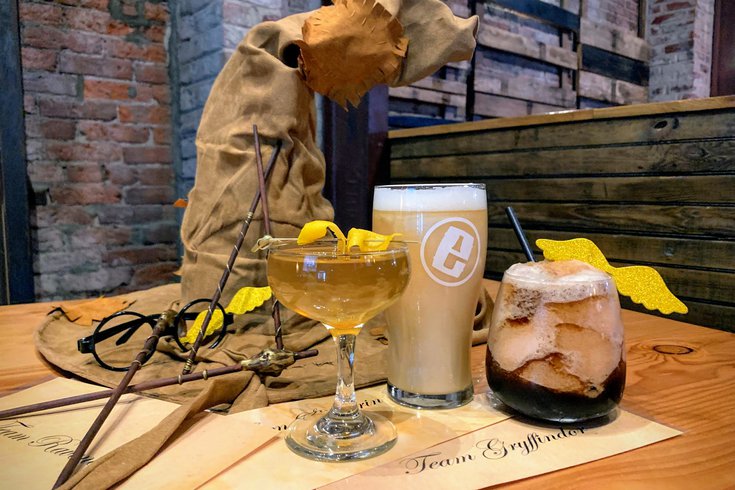 Evil Genius is celebrating Harry Potter with an exclusive 'glitter beer,' specialty butterbeer-inspired cocktails, and special events through the end of March. The line-up coincides with the world premiere of 'Harry Potter: The Exhibition' at The Franklin Institute, which opens on Feb. 18.

Evil Genius Beer Company is honoring the world premiere of a Harry Potter exhibit that's coming to Philadelphia with the release of a beer inspired by the book and movie series.

"Harry Potter: The Exhibition" will arrive at The Franklin Institute on Friday, Feb. 18. The long-awaited program was first announced in July, and will be an immersive experience that brings together fans of the Wizarding World to get an up-close look at original props and costumes used in the films.

RELATED: 'It's Always Sunny in Philadelphia' is coming to Plymouth Meeting Mall with a Paddy's Pub pop-up event

As part of the festivities, the Fishtown-based brewery and taproom is releasing a special-edition homage to butterbeer on Feb. 18.

"Spoiler Alert: It's LeviOSa, not LevioSA" is a vanilla caramel blond ale with a 6% ABV. The beer is made with natural flavors and has a sweet taste thanks to the toasted and caramelized malts used during the brewing process. It will be available exclusively at the brewery, either by draft or growler.

Two Harry Potter-inspired cocktails will be available through March 20 as well. These include the "Throwing Snowballs at Voldemort," a butterbeer slushie made with Stateside vodka, and the "Defrosting Broomsticks," a butterbeer-inspired martini.

Evil Genius will also be hosting several special events through the end of March in conjunction with the Franklin Institute exhibit.

Kicking off the lineup is a 0.5K charity run on Saturday, March 12 at 12:30 p.m, hosted by The Hogwarts Running Club. Tickets are $30 and include a free pint and a swag bag with Evil Genius branded water bottles, bottle openers and more. Proceeds from the event will be donated to support Trans Lifeline, a hotline-based charity that provides emotional and financial assistance to transgender individuals.

On Sunday, March 27, Evil Genius will hold a Harry Potter-themed drag brunch. Tickets for "Gryffindor in the Streets, Slytherin in the Sheets" are still available. The event will open at 11:30 a.m., with the show to follow at noon.

Did you know that this groundbreaking exhibition will feature 10 distinct areas, including those inspired by The Great Hall and Hagrid’s Hut? https://t.co/VdSlIAcRWB pic.twitter.com/tVzOoreySJ

Aside from its Harry Potter-themed event line-up, Evil Genius will join other area vendors on Saturday, March 12 from 12 until 6 p.m. for the "Block Party Under the El." The anniversary party for the brewery's tasting room includes themed-photo opportunities, food provided by Red Stone Pizza, and drinks.

Anyone under 21 or without identification must be accompanied by a parent or guardian who is 21 or older.