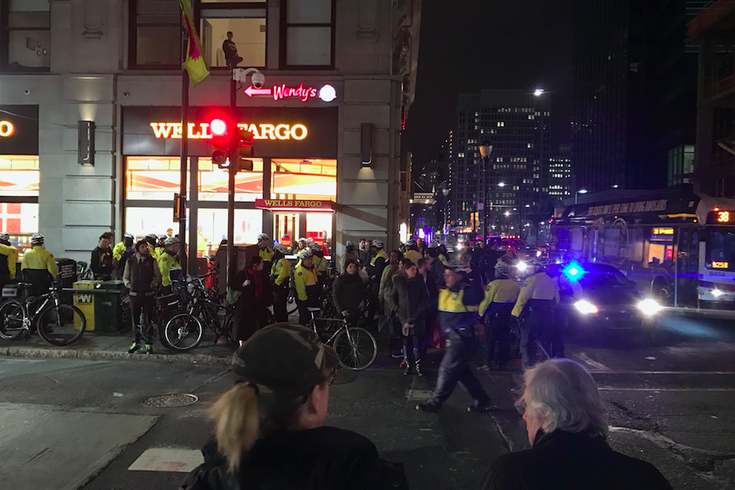 Police respond to flash mob at Wells Fargo bank at 15th and Chestnut streets on March 6, 2017.

A group of roughly 50 youths wreaked havoc in Center City on Monday evening, packing into a Wells Fargo bank branch and starting a fight that swept up innocent customers, according to an eyewitness and other media reports.

An eyewitness later said there were 40-50 teens inside the Wells Fargo branch at 15th and Chestnut streets. The witness said a fight broke out and dozens of police descended on the bank. A video obtained by NBC10 shows a large group of teenagers fighting on the sidewalk outside City Hall.

About a dozen teens remained at the scene shortly after 7 p.m. Several others had fled, the eyewitness added. An ambulance was seen outside the bank, and the eyewitness said it was possible a Taser might have been used at some point.

According to 6ABC, police encountered one group of teenagers at SEPTA's Walnut-Locust station, where they reportedly were running along the platform. Nearly two dozen people were taken into custody for questioning and one individual was taken to Thomas Jefferson University Hospital to be observed for undisclosed injuries.

Officials said an early dismissal from school was likely a factor in the incident.

A Philadelphia police officer with the Ninth District declined to provide any further details.