Eytan Shander: Ben Simmons can learn a lot from Giannis Antetokounmpo — but he probably won't 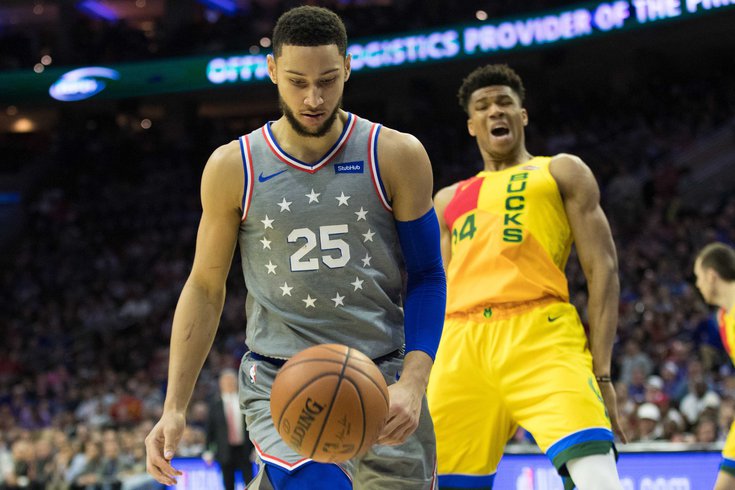 The two-time MVP who closed out the Suns with 50 points — laughing in the face of anyone left still counting to ten — teaches a lesson without ever speaking it. Whatever the buzz phrase of the day happens to be, Giannis Antetokounmpo lived up to it and then some. He went as literal as possible with silencing his haters.

The only added touch would've been for the Bucks to do the exact same thing they did Tuesday night, except on the road. The sweetest revenge served up directly to fans who paid to count, only to see it fizzle at the hands of a true MVP. It’s frightening to think how easy it looked at times for this young superstar – especially with Jrue Holiday and Khris Middleton being more than enough of a top-heavy cast.

This was hardly a “Super Team” but neither was Philadelphia. They didn’t add anyone from a disgruntled James Harden down to prying away Kyle Lowry. Some of that may simply be the deal wasn’t right for Daryl Morey, the other part was the team was already built to succeed and simply failed to execute.

Winning in the NBA is hard, folks. New kids don’t just step on the block and start dancing in parades. Pre-existing champions may move to another team and win —or we see what happened this week, with one of the league’s all-time brightest stars finally getting his ring after years of taking incremental steps to get it done.

The Sixers played with so much tenacity throughout the regular season, earning the top seed in the East. That morphed into a sense of entitlement – reinforced after their first-round disposal of Washington. But “Ben Simmons and those damn free throws” was the story, even after wins.

The overall fear from Simmons of not going to the line to avoid missing free throws was palpable. Both Giannis and Simmons received plenty of support from their respective home fans, but only one of them took it to the fans on the road. We should note, this was a brutal stretch for Giannis in the post-season, shooting just under 59% from the stripe, but upped it to 66% for the Finals. And went a ridiculous 17-19 in the Bucks' title-clinching win in Game 6.

See, Ben? It was that easy. The hardest part wasn’t making free throws, but rather overcoming the fear of public embarrassment following an airball. But this is also where it becomes masterful how Giannis overcame whatever angst he had at the line. Antetokounmpo took 85 free throws in the six-game NBA Finals. That’s just 3 more FTs than he took in the two previous series combined! The Hawks also went six games, while the previous series against the Nets went seven!

The Greek Freak wasn’t the only one here who upped his attempts from the charity stripe, as Simmons shot 17 more of them in the Hawks series. To be fair, the previous series only went 5 games with Washington, and the percentage was worse with more attempts against Atlanta. It's also worth pointing out that Atlanta went into "Hack-a-Ben" mode quite a bit, so some of those increased attempts weren't a product of Simmons being aggressive, but were in fact the opposite.

It’s a mess at best — and a giant-sized ball of 7-foot knots at worst.

It's all in his head, right? The only answer remains is that the Sixers simply don’t have enough time to wait and find out. They no longer trust Simmons to simply address the fears, let alone overcome them. That’s the biggest takeaway here: Simmons may simply not be good enough to ever conquer those fears, which is evident by the vast difference in performance with Giannis vs. Simmons this postseason.

Ben’s simply not someone you trust moving forward to make free throws. I’m not even sure if you trust him to get to the line in the first place without other teams intentionally putting him there, which is embarrassing enough in its own right. There isn’t a certain amount of workout videos or IG posts that will change your mind, and why would they? You’ve been down that road before, buying into those videos plenty of times.

There’s no trust left between Simmons and Joel Embiid, as evidenced by the micro-reaction by the latter following Ben’s infamous pass. How can Doc Rivers trust Simmons on offense? We saw him pull Simmons late when it came to needing the team to make a bucket. We already covered last week how Morey owes nothing to Simmons and must trade him.

I’ve seen a bunch of comparisons to Carson Wentz leaving town and the inevitable Simmons trade, and how both walked a similar path. There is one common ground here that gutted each relationship: a lack of trust. The only difference being the means to the same end, with team and player forced to part ways.

Wentz lost trust in an organization that refused to protect him, both on and off the field. As much as it appeared to be all the QB’s doing, we know that not to be true. We know leaks constantly came from the NovaCare Complex each year, all seemingly hovering around Wentz. The team took a drastic step back last year and it was conveniently placed on the shoulders of a guy who was the MVP pre-injury. Wentz saw failed efforts by the team to bring in good young talent around him, whereas Simmons was given everything and then some.

The Sixers lost trust in Simmons after building a team where he’s the ball-dominant guard, and main catalyst to start the offense. Through years of “Hack-A-Ben” the team still stuck by him. It’s not like NFL defenses were loading the box with nine guys daring Carson to throw 1-on-1 to his outside receivers.

Hopefully Simmons can learn something from the ridiculously awesome NBA Finals performance by Giannis. It’s just not likely to be here in Philadelphia, if it ever happens at all. We haven't seen much to this point to suggest he's going to do it, but he's still young.

Trust is a funny word in our sports vocabulary. It’s used to define so many wide ranges of reasons why a team wins or fails. In this case, it’s the underlying factor as to why two of our city’s stars had to/will leave. Both different means to the same destination, without trust there’s no trophy.