Luckily for the Sixers, they appear to have the right man in charge to maximize Simmons' value, even if you think he has very little. 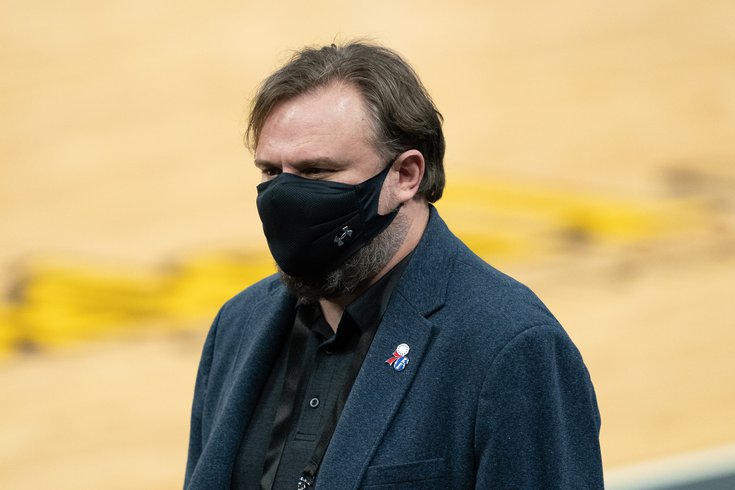 Do you remember that game “Telephone?" You and a bunch of other kids would sit in a big circle. One person would start by whispering a word or phrase into the ear of the person to their right. From there it was all about trying to go around the circle with the same word(s) being whispered.

It’s a perfect representation for our society, because rarely – if ever – did the same word make it all around. Be it simply the inability to distinguish between what you actually hear and what you want to hear, or the pre-Twitter troll who would purposely derail the game, making it all about themselves.

Like how beauty is in the eye of the beholder, value is about how it's defined by the individual; it changes as it gets whispered down the line. And that's especially true in sports. Everyone, from the Sixers themselves to the fans, wants “value” back when it comes to a Ben Simmons trade, but defining that word is where the disconnect begins. Much like our childhood game, Simmons’ true value is routinely lost in translation. The trolls, radio callers and casuals — who gave up on the league during The Process – don’t make it any easier by inserting their version of value, which is akin to turning the word “plate” into “vacuum."

But only one person's definition of value actually matters: Daryl Morey.

The harsh reality is Simmons and the Sixers saw their point guard's value drop – a little bit – after this past season. To be fair, everyone’s stock dropped, some more than others. Simmons exposed himself as afraid to score in a league dominated by scoring, and that can’t be mitigated in a deal simply because he plays great defense. It helps, but it’s not going to make a GM forget the Hawks series.

Morey is the best executive we’ve had running a team in this city in a long time, so I’m excited to see what he gets back. He’s creative and has a solid understanding of working the cap, two things that helped Howie Roseman build a Super Bowl winner. He’s going to have to be creative to maximize the value on any return for Simmons, and he’ll have to be a magician to turn defense into offense – in a league that prioritizes scoring more than ever.

The good news for us anxiously waiting to see how this plays out is that Morey really only has three options in how to deal Simmons, and it may even be easier than that. As you will see, it’s really about two general options not three, with you filling in the definition of value like a Telephone circle back at summer camp.

First, there's a potential deal that's heavy on draft picks coming back. But the whole reason why the team is moving Simmons in the first place is to capture the window of Joel Embiid’s win-now mode. So, unless Morey has some advanced plan to trade for a bunch of assets/draft picks then move them for a player on or before draft night, redline this option right now. They need someone who can play with Embiid and Harris right now to make this team a true offensive contender.

The other options are star or superstar. We know the latter, it’s Damian Lillard. Whether or not Portland truly parts with Dame Dolla — and if it takes a big ask from a team like Minnesota or Sacramento in a three-team deal — are gigantic hurdles to clear. Morey may not have the ammo or proper dance partner to truly make this deal happen. There’s also the question of whether or not Portland is open to trading away one of the league's most prolific scorers and getting an elite defender who is afraid to shoot in return. Again, while he still holds value in this league, Simmons does not equal Lillard. So with this option, there are still significant roadblocks and work to be done in order to make it a realistic possibility.

The last option is my favorite, because it’s one where I get to say I told you so. During the draft process and ultimately through the Sixers selecting Simmons, I battled a lot of people on the radio about who else was available. It’s the same guy I’d trade for now, knowing you can get on the winning side of this deal, most likely getting a spot shooter or another big, even if it takes a third team.

Trade for Brandon Ingram. If you don’t like that, start with Beal before you look at Lillard. Make a push for Zach LaVine on the last year of his deal in Chicago. The irony in all of this is I fought with callers and other hosts back then about why Ingram was a better fit with Embiid, and when it’s all said and done, he might actually be on this team moving forward.

He’s a solid fit from an offensive standpoint, being one of the game’s great improvement stories. He gets you 24 points a night — consistently for each of the past two seasons — and shoots nearly 40 percent from three. He also isn’t afraid of getting to the free throw line and, most importantly, he can take over late in a game.

Ingram is under contract for the next four years and it actually works from a money standpoint. The only concern is Morey would need a third team to get involved, as New Orleans might not want Simmons and Zion Williamson together, which would be giving up a ton of shooting at once. I’m more than OK with Beal and would be happy with LaVine, but there’s a small push for vindication if in fact they trade for Ingram.

Then again, your definition of value in what the Sixers get back may be different than mine. It’s probably different than Morey’s too. The unfortunate ending to this leaves us with no closure on who Simmons is or (soon-to-be) was in Philadelphia.

He leaves as one of the most difficult athletes to define in our city’s history. There is no universal definition of what equal value is for Simmons in a trade, half of you can’t even define what his value is on his current team.

I always hated that stupid game.