Plus, a look at the Cavaliers, who once again find themselves linked to the Sixers guard. 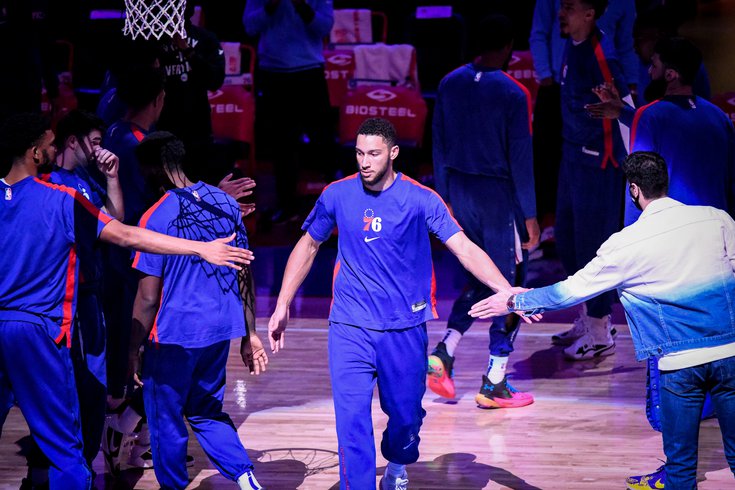 It's Ben Simmons trade rumor day, otherwise known as a day in July 2021 that ends in y, with longtime NBA insider Marc Stein adding fuel to the fire in the latest edition of his newsletter.

Stein, who recently went the independent route through Substack after a run with the New York Times, had a lot to say about the market dynamics and Philadelphia's position as it stands right now. Nestled within the piece was this list of the suitors:

Numerous teams want him. The natural question: Will any of them assemble an offer that win-now Philadelphia and president of basketball operations Daryl Morey find palatable? Draft picks can help Morey only so much.

The length of Simmons’ contract, if not the dollars, only adds to his appeal to teams that do not typically attract free agents. He has four seasons left on his contract at nearly $150 million — and the team control that comes with that status, in most cases, is bound to outweigh any trepidation teams might feel about the pressure Simmons' agent Rich Paul can apply to dissuade them from pursuing him.

Just scan through the teams that have been linked to a Simmons trade already: Cleveland, Indiana, Minnesota and Sacramento are known suitors. Toronto is also said to have expressed interest. More will emerge.  [Marc Stein]

We've discussed handful of these suitors in this space already. Malcolm Brogdon's name has been a topic in mailbags and shot-down trades previously reported elsewhere, the Timberwolves were discussed last week, and so forth. We haven't touched much on the Kings so far, and Toronto is a bit of a curveball worth getting into, so let's touch on these scenarios in rapid-fire form.

Since we only addressed the Cavs in small detail previously, let's include them in a rapid-fire roundup of names/destinations and the merits of each.

Cleveland is going to be prominently involved in any/all trade rumors right now as a result of the looming decision they have to make on their young backcourt. Collin Sexton is the first guy up approaching a potential payday, and reports suggest they're willing to move him for the right deal as they try to get back to the playoffs post-LeBron.

Individually, I think Sexton and teammate Darius Garland are both good young players. Garland was absolutely killing a lot of people down the stretch of this season, and Sexton has gotten better every year for Cleveland, improving his overall efficiency and playmaking while assuming a bigger burden as a scorer. I would just be skeptical of how quickly that can translate to a team looking to win and centered around Joel Embiid.

I'm not sure either guy is good enough at enough things to be the highlight of a Simmons package. If you could combine Garland's flashier handle and superior playmaking ability with Sexton's scoring ability, that'd be an ideal fit with the roster they'd join. But I don't think you can wait to see if Garland hits the next level as a scorer, or for Sexton to create as many shots for teammates as he'd need to.

Perhaps you could make the case that Sexton is simply on the verge of a true breakout in the right situation — a 22-year-old guard averaging 24 a game on rock-solid efficiency is nothing to sneeze at. But a package centered around Sexton would be quite a risky play on Philly's part, given the discrepancy in playmaking between Simmons and Sexton and how the size discrepancy would impact Philly on the glass and on defense. I'm not sure I buy Sexton as the guy to come in and find easier looks for Embiid so much as it would mean having another guy who can score to take the ball out of his hands. It would probably be a team with another move to make to get where they need to go.

There's also the salary-matching issue, one that will make picking up Kevin Love a borderline requirement to get this done. You could spin that into a positive if you want — a rejuvenated Love would give you shooting off of the bench and some versatility in the frontcourt depending on how the rest of your roster fills out, and he could give Embiid another outlet in the minutes they share. But he's also a pretty uninspired defender, a constant injury risk, and making a boatload of money at a position where the Sixers already have a lot of resources tied up.

Sacramento was a team we heard connected to the Sixers all throughout last offseason in a much different context. Viewed as a potential dumping ground for Al Horford's contract, many Sixers fans were hoping for a potential acquisition of Buddy Hield.

I like Hield well enough, but a trade package for Simmons centered around Hield would not even be worth discussing on Philadelphia's end. The big prize is undoubtedly 23-year-old guard De'Aaron Fox, and it seems highly unlikely the Kings want to make a trade for Simmons that sends their best player back to Philadelphia and hampers their ability to make a playoff push.

Let's assume for a second they'd include Fox for the sake of argument. Fox is a very good young player — he's coming off of a season where he averaged 25.2 points and 7.2 assists per game with a better than 2-to-1 assist to turnover ratio, and he did so in the Western Conference pressure cooker. Fox is one of the few players in the league with the speed to challenge or even beat Simmons in the open floor, and the Sixers could maintain a healthy transition attack while gaining a more eager halfcourt attacker in the process.

RELATED RUMORS: Timberwolves 'will be in on' Simmons, but is there a fit? | Simmons still has a lot of trade value | Sixers hoping to land Lillard; Simmons a possibility for Clippers | Warriors 'are going to make a push' for Simmons

A deal for Fox would test the idea that the Sixers simply need someone who is willing to shoot as opposed to being a good and capable shooter. An outlier season during his sophomore year aside, Fox has been a below-average outside shooter in Sacramento, clocking in last year at 32.2 percent from deep on 5.5 attempts per game. His ability to hit pull-up jumpers from midrange makes him a considerably different player to cover than Simmons — Fox shot over 48 percent from 10-16 feet last season and is more than willing to get shots up — but you're very much hoping for a leap forward rather than getting a readymade outside threat.

Fox's efficiency improved from almost all areas inside the arc last season, and he was one of the league leaders in drives per game while finishing at the rim at a rate equal or better to an assortment of talented peers. Would that hold up in Philly, aided by the attention paid to Joel Embiid, or would the presence of the big guy in and around the paint force him to reconfigure his game somewhat?

In any case, I don't think a Fox trade is happening, but that's where you have to aim if you're the Sixers.

Toronto being interested is not a huge shocker — Masai Ujiri is shrewd enough to look for buy-low opportunities anywhere they might pop up on the marketplace — but it's not immediately clear to me what sort of deal the Sixers would make with the Raptors that would come without a significant downside.

A sign-and-trade for Kyle Lowry is the first place a lot of people will drift to, despite the salary cap complications that come with such a pact, but let's set that aside. Lowry would absolutely offer something different as an offensive player in the halfcourt for Philadelphia, and he would also significantly shorten Philadelphia's title window with this group. It's basically the exact inverse of the Cavs situation. If the Sixers get one or two legitimate cracks at the title as a result of that sort of deal, you could argue it's worth it for that opportunity alone, but that's far from a certainty with the Eastern Conference roadblocks in front of them, and if you don't cash in during that time, some sort of outlier development on your bench (e.g. a star turn for Tyrese Maxey) would be necessary in order to expand the title window for the next few years of Embiid's prime from 2023 onward.

Maybe the Sixers view Embiid's health as a ticking time bomb to the point that they'd be willing to make that trade-off, but if they did (and I've been given zero indication that's the case), it stands to reason they wouldn't spend time and energy in an effort to move major pieces around him in the first place. Trying to get Lowry at the deadline was a move of the right sort, an additive move to help out Simmons and Embiid and push them closer to true contention status, but swapping Simmons out for Lowry creates a different set of problems to consider.

Beyond Lowry, I'm not sure who specifically could push the Sixers forward in a meaningful way. Pascal Siakam's name has been floated in a trade rumor or two over the last year, but he doesn't offer what they need in Simmons' absence and would likely be more valuable as a chip in a possible three-team deal. Fred Van Vleet is a high-volume shooter with playmaking chops, but I don't know anyone who views him as a lead initiator for a real playoff threat. There are other players of considerable value in Toronto, most prominently OG Anunoby, a defensive whiz who has shown considerable progress as a shooter and took steps forward as an initiator last season, but he falls into the Siakam bucket as a player who would necessitate either a bigger trade or a subsequent trade to effectively round out the lineup. And I'm not sure he's being made available in the first place — Toronto made a big investment in him just last offseason.

All of these teams highlight something we've discussed throughout the Simmons rumors this summer — it's very difficult to find the sweet spot that sounds agreeable for both teams and rounds out Philadelphia's lineup in a helpful way. Short of one of the big fish on the market (a la Damian Lillard or Bradley Beal) asking out and wanting to come to Philly, the Sixers are currently staring at a market filled with imperfect offers and partners. Can Daryl Morey find the right suitor?

MORE: Sixers mailbag: Simmons trade scenarios, his current value, and a potential position change | The only person who can fix Simmons is Simmons | If the Sixers trade Simmons, who can they get for him? | The Sixers need to trade Ben Simmons, for his sake and their own