Stay or go: Should anyone stick around from end of Sixers' bench? 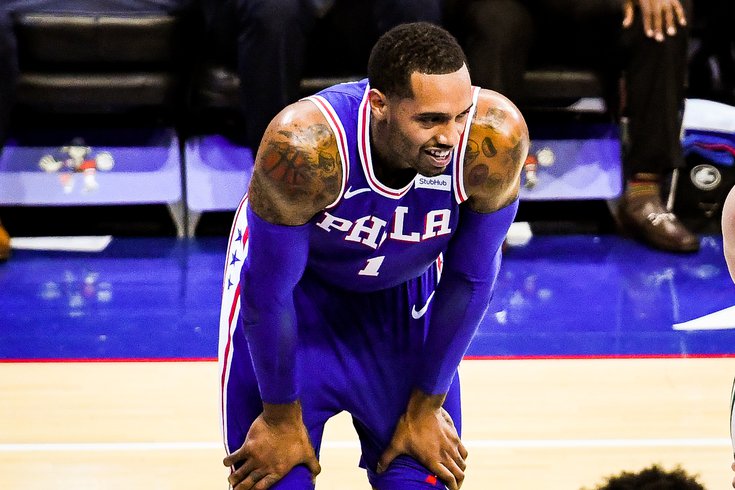 Should the Sixers bring Mike Scott back for another year?

We've moved past the "important" guys hitting free agency this summer, so we're going to do this rapid-fire style for the group closer to the end of the bench.

Completing a rare arc of fan-favorite bench player to reviled emergency rotation guy, Mike Scott has already indicated through his social feeds that he probably won't be coming back next season. His Instagram feed has featured photo after photo of the memories he created during a brief stint in Philly, and you have to admit, the man made the most of his time here and knew his audience.

But it's easy to see why many soured on the Hive leader after the last two seasons. Scott's dip in form from elite spot-up shooting (41.2 percent to close out 2018-19) to below-average from deep (34.2 percent this season) sapped whatever value he had. With three-point attempts making up the vast majority of his looks, Scott simply can't afford to be a bad shooter and stay in the rotation, even if he tried valiantly to make up for those misses with effort plays.

I would honestly argue Scott didn't do a horrible job in the small-ball lineups built around Ben Simmons, even if he's nobody's idea of a rim protector. Could they do better than Scott for a stretch big? Of course. But for a guy who has been a one-position defender for basically his entire career, he was fine enough and served his purpose as a floor spacer, at least a theoretical one.

Even still, the Sixers would be better off looking for either a true stretch five or at least a four with some flexibility to their game. Scott lacks the size of a stretch big and the ballhandling of a wing type, minimizing lineup flexibility with his limitations.

If they were to eventually bring him back on a minimum deal after striking out elsewhere, that would be an acceptable outcome. But I think both parties know he shouldn't be anything close to a Plan A in the offseason.

Verdict: Stay, if only for the dunks

It's difficult to glean anything from garbage-time minutes and G-League opportunities, but Tucker is a nuclear athlete at the very least. He doesn't turn 24 until December, so he's got youth on his side still, and he's one of a handful of players who earned rave reviews for his work ethic as a member of Philadelphia's low-minute group. He's a hard-nosed, team-first guy who relishes the challenge on defense, which is his ticket to getting minutes if he's fortunate enough to get some moving forward.

Tucker's NBA future likely hinges on whether he can ever become a reliable three-point shooter. At the G-League level, he can often get by using his strength to power through smaller/weaker defenders, making up for an inconsistent jumper by getting to the rim. But Tucker doesn't have the ballhandling chops to justify letting him run much offense at the NBA level, so improving on his below-average numbers as a shooter has to be priority No. 1 in the offseason and for his career.

If he doesn't, I would selfishly love for the Sixers to keep him around just so I can watch him put on his own personal dunk contest in warm-ups. We'll see what the undrafted free agent market looks like post-draft, but it wouldn't hurt to have Tucker around through training camp at the very least.

Clark never had much of a chance to show what he has in a Sixers uniform, appearing in just two games for 13 minutes before the regular season came to a close. It's pretty easy to make this call anyway, based on some of the reasons we discussed with Scott above. Clark doesn't offer you much positional versatility, is a below-average shooter, and while he's mostly fine as a defender, he's not doing enough on that end to make up for what he lacks elsewhere.

If the Sixers are going to continue to prioritize having numerous role players who are catch-and-shoot experts on the roster — and there's no reason they shouldn't with this core group — they have to prioritize signing or acquiring guys with a track record of being good at it. The volume is there for Clark, but the efficiency hasn't been.

At his peak, Tolliver would have been a perfectly acceptable bench forward to play in bench lineups built around Joel Embiid, standing on the perimeter and waiting for his opportunity to let it fly when Embiid is doubled. Unfortunately, Tolliver's best days are behind him, and if the Sixers are going to dip into the aging shooter market, they'd be better served looking for someone with a bit of versatility, at least a guy who can hit shots on the move rather than a stationary target.

Tolliver, who the Sixers were happy with as a locker room presence, might have some value to an up-and-coming team looking for a mature voice on a young team. This team, though, needs production and flexibility a lot more than they need an authority figure at the end of the bench.