Sixers mock draft roundup: Which guard could Sixers target at No. 28? 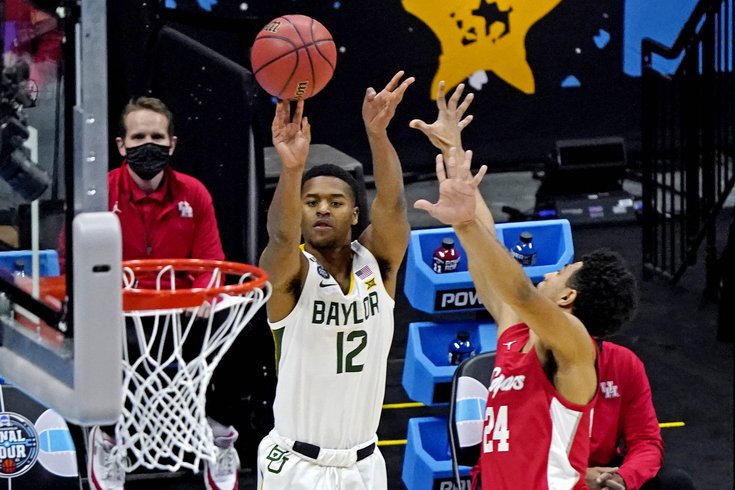 If you can believe it, we are only 17 days out from the 2021 NBA Draft, a rare late-July NBA event that could feature a lot of activity on the Sixers' end. With new trade rumors popping up seemingly every day, Philadelphia might not end up making a pick at all if they're able to put together a mega-deal to move closer to a title.

Until that happens, though, we're left to scan through mock drafts and reports to see who might be added to the roster on the 29th. Here's what some of the experts have to say.

Here's what Mr. DraftExpress himself had to say about Grimes:

The Sixers will be looking to surround their core with as much 3-point shooting as possible after a disappointing playoff exit. Enter Grimes, one of the best shooters in the college game, who showed a lot more versatility as a passer than he had previously gotten credit for in what was an outstanding week of play at the NBA combine. Grimes looks physically ready to help a team after playing a major role taking one of the best defensive teams in college basketball to the NCAA Final Four.  [ESPN]

This is, to put it lightly, a bit of an outlier pick from Givony. Scanning through mock drafts from others around the industry, many barely have Grimes on the board at all. Sam Vecenie of The Athletic, for example, had him falling all the way to Indiana at No. 60 with the "Mr. Irrelevant" pick to close out the second round. There's not another mock I can find that places Grimes in or around the first round.

Grimes' signature skill, as Givony notes, is three-point shooting. And he was damn good at it in 2020-21, making over 40 percent of his threes despite shooting a whopping 8.3 attempts from deep per game. The question is whether that alone is going to be enough to carry him on offense, with Grimes offering little in the way of secondary skills on the wing. He's not much of a playmaker, hovering around a one-to-one assist/turnover ration despite averaging under three helpers a game, and his efficiency inside the arc leaves a lot to be desired. You could argue both are a product of his inability to create separation, which leaves Grimes in the unenviable position of trying to make tough pull-ups or shoot over traffic in the paint. That's a tough way to make a living.

I think there's also room to be skeptical of his shooting. Grimes shot poorly his first two years in college, and his free-throw numbers were subpar (mid-60s and below) to match. Those numbers climbed along with his outside shooting in 2020-21, so maybe this was a true breakthrough for the Texas native, but if you're only looking for shooting, there basically have to be safer bets.

Here's a quick blurb on Butler that is worth taking note of:

Teams are still in wait-and-see mode on Butler, who must be cleared after the NBA red-flagged a heart condition that was discovered during his college recruitment. He played three seasons at Baylor without any issues, but no clearance before the draft creates risk that teams may want to avoid.  [B/R]

On the floor, Butler was a high-level contributor for this year's national champion, a guy who we spotlighted previewing the tournament in March. Butler was Baylor's lead attacker and top scorer all season, never shy about letting it fly from deep. It's his rise in efficiency over three years that lends hope for his NBA future — Butler made 41.6 percent of his threes on over six attempts per game in 2021, and with free-throw numbers in the high 70s, he's a good bet to shoot at the next level. He's not an especially gifted playmaker, but improvements as a finisher around the rim give him a chance to be a potential three-level scorer at the next level.

Teammate Davion Mitchell stole a lot of his thunder with a terrific two-way season and the establishment of a reliable jumper, launching into lottery discussions by the time the Bears finished their national championship season. That doesn't take anything away from Butler, who was a more consistently impactful scorer during his time in college. And Butler's coexistence with a guy like Mitchell at Baylor bodes well for his ability to play next to any number of young Sixers guards, Tyrese Maxey and Shake Milton in particular.

Here's what Norlander had to say about Murphy, who has been attached to Philly once or twice in the pre-draft run already:

It's plausible, now, that Murphy goes in the first round. This was unthinkable a year ago and NEARLY unthinkable five months ago. From Rice to Virginia to the NBA. Fascinating path, all the more so because he wasn't declared eligible until right at the start of last season. Murphy was one of only two players to shoot 50/40/90 last season. For the uninitiated, that's the coveted club of players that make at least 50% of their total field goals, 40% of 3-point attempts and 90% of free throws. I have to put a top-30 assessment on a player like that, all the more when you factor in his length and perimeter defense proficiency. This is a good draft night story.  [CBS]

Murphy shot the hell out of the ball at the college level, and when a guy shoots 40+ percent from three at his size (listed at 6'9"), a lot of people are going to take notice. Across three years of college ball, Murphy shot over 40 percent from three on 5.5 attempts per game, combined with excellent free-throw numbers that suggest the shot will translate. On the other end, Murphy has the tools to be a good team defender, light on his feet and switchable, which makes him the sort of three-and-D prospect every team is looking to fill their roster with these days.

I'm not sure the Sixers need pure shooters as much as they need shot creation, something everyone found out the hard way as they collapsed in the second round against Atlanta. He's even less of a playmaker than the aforementioned Grimes and a guy who is going to be reliant on others to create most of his looks at the next level. Depending on what the roster looks like heading into next season, the Sixers could be in need of guys to help pick up the creative slack in the wake of a trade.

However, Murphy would be a solid pick for them this deep in the first round, a guy who would likely contribute right away and still add some extra elements to his game in the years to come.

Here's what Harper had to say on Dosunmu:

Previous analysis: Tough to know which way the Philadelphia 76ers may go, but getting more options in the backcourt seems to be the safest bet. I’d love Dosunmu here. His shot was all over the place in his time at Illinois, but he comes off a very encouraging season, hitting nearly 40 percent from deep. Dosunmu can score, and he’s a very good defender with a great wingspan. I’m not sure you’d want him as a full-time point guard, but he’ll really work next to Shake Milton off the bench.

To build off of that last point, I wouldn't fall in love with any prospect this year because of the likelihood that Philadelphia could use No. 28 to try to sweeten the pot in a big-time trade. Not saying it's a certainty, but it has to be in the back of everyone's minds.

Dosunmu was one of college basketball's best and most productive players in his junior season, basically averaging 20-6-5 for the Illini, and his 39 percent mark from deep was an encouraging step forward. He faces two big questions making the leap to the next level — is that shot trustworthy enough, and does he have the playmaking chops to be a lead guard at the next level? The latter question is not something the Sixers really need to be concerned about at pick No. 28, where they'd be able to celebrate getting a player with his all-around ability and high character as the foundation for (at the least) a solid role player. He's long, intelligent, and composed on both ends.

The jumper is another story, with Dosunmu a below-average shooter on middling volume over the duration of his career. His mechanics can be a bit inconsistent, and in an offense where he'd spend a lot of time playing off of an Embiid post-up or waiting for catch-and-shoot opportunities generally, that might be a concern, particularly if they decide to hold onto Ben Simmons.

If the board shakes out the way Harper has it falling here, Nah'Shon "Bones" Hyland (who Harper has going No. 29 to Phoenix) feels like another excellent candidate late in the first round. VCU was forced to withdraw from the NCAA Tournament this spring as a result of multiple positive tests leading into the tourney, robbing Hyland of a chance to improve his stock. But Hyland had arguably the best draft combine of anybody in attendance in Chicago, excelling in scrimmages to reaffirm what he showed on the floor in the A-10. He's a confident shooter from deep range off-the-dribble and off-the-catch, offering a bit more upside than some of the other candidates this deep in the draft.

Here's what Kalbrosky had to say:

When it comes to shot creators, there are few more exciting than Florida’s Tre Mann. After a slightly underwhelming freshman campaign, Mann was able to literally grow nearly two inches and also improve his draft stock quite a bit during his sophomore season.  [FTW]

Mann is another player we featured in our March Madness viewing guide for Sixers fans. A former McDonald's All-American who disappointed during his freshman season, Mann came on strong as a sophomore, taking a big leap as a shooter that helped open up the floor for everything else he has in the toolkit. Mann has allegedly grown to six-foot-six during his time at Florida, and guys with plus handles who can hit from three and kill you with the in-between game (he's got a nice floater package) don't exactly grow on trees.

In March, it looked like a stretch to expect him to fall to Philly's draft range, with Mann playing dynamite basketball down the stretch for Florida, including a 30-piece in Florida's matchup with a talented Tennessee team in the SEC tournament. Mann was an efficient scorer in Florida's two tournament games, and a lot of mocks still have him closer to the early 20s than they do Philly's pick at No. 28. But if he falls, Mann is an intriguing target for Philly.