Investigation continues into building collapse that killed a firefighter in Fairhill

Lt. Sean Williamson was killed after being trapped in rubble along with four other firefighters and an L&I worker 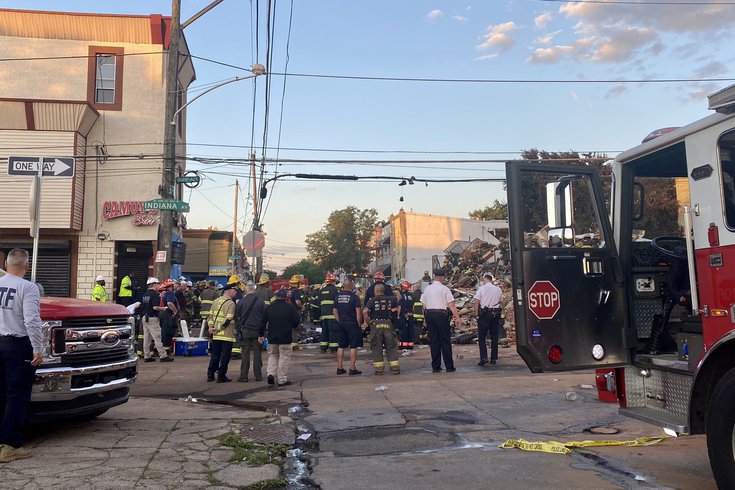 Lt. Sean Williamson, a 27-year veteran of the Philadelphia Fire Department, was killed after a fire and building collapse in Fairhill on Saturday morning. Four other firefighters and a worker from L&I were also injured.

Lt. Sean Williamson, a 27-year veteran of the Philadelphia Fire Department was killed after being trapped in rubble from a building collapse in Fairhill early Saturday morning.

The fire began in a commercial building on 3rd Street and West Indiana Avenue, and first responders arrived on scene around 2 a.m. They were able to put out the fire within 15 minutes. By 3:30 a.m., a large chunk of the building collapsed, killing Williamson and injuring five other people, including four firefighters and one inspector from L&I.

One person escaped the collapse by jumping out of a second story window. Two firefighters and the L&I inspector were taken to Temple University Hospital with injuries, and the two firefighters remained hospitalized on Sunday afternoon in critical but stable condition.

An investigation is underway into what caused the fire — and ultimately, the building collapse — but officials say that the full story could take days and weeks to uncover. Fire Marshal Battalion Chief Christopher Beale told the Inquirer that officials will examine every possible ignition source and rule out possible causes over the next several days.

The Bureau of Alcohol, Tobacco, Firearms and Explosives' National Response Team has been deployed to begin a joint investigation with the Fire Marshal and Police Department.

The ATF will work closely with both agencies to determine the cause of the fire and building collapse.

"Anytime a firefighter loses his/her life in the line of duty, it is a tragic loss to the community," said Matthew Varisco, Special Agent in charge of ATF's Philadelphia Field Division. "We are heartbroken for the families of these firemen and vow to work alongside our partners with the Philadelphia Fire Department and the Philadelphia Fire Marshal's Office to determine the origin and cause of this fire which resulted in the death of one firefighter and injuring of another."

Fire Marshals will work with L&I to understand any structural issues with the building that could have led to its collapse. Officials said on Saturday that the building was the site of unpermitted construction several years ago.

CBS Philly reported on Sunday that L&I records for the property indicate that there were several code violations associated with the property.

Mayor Jim Kenney responded to Williamson's death and the event in Fairhill on Saturday, expressing his condolences to Williamson's family and to the Philadelphia Fire Department as a whole. Williamson leaves behind his mother and son.

"I am deeply saddened to learn of the tragic death of Philadelphia Firefighter Lieutenant Sean Williamson. This is a heartbreaking day for our city," Kenney said. "For more than 27 years, he dedicated his life to serving and protecting the people of Philadelphia, and sacrificed his life protecting others. Early this morning, like every day, he exemplified heroism by doing what our first responders do everyday; put on their uniform, leave their loved ones, and carry out their sworn duty to protect and serve the residents of this city. I share my deepest condolences with everyone who knew and loved Sean. I ask all Philadelphians to keep his family, and all members of the Philadelphia Fire Department, in your prayers at this difficult time."