A family with an adopted mission: children with special needs 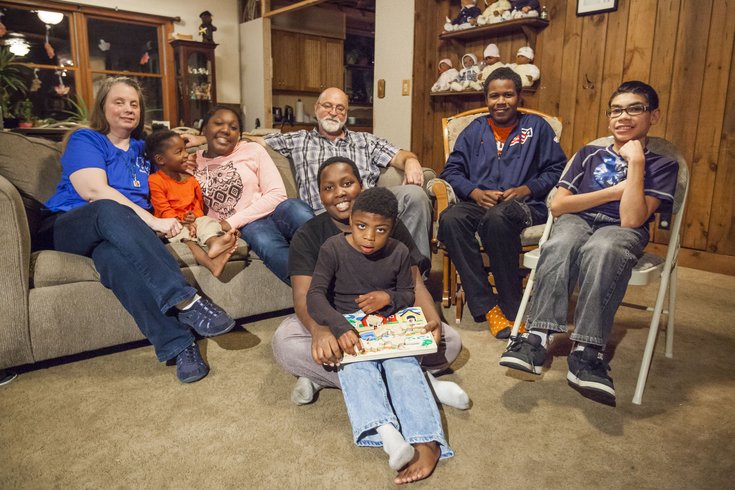 The Beck family in their Sicklerville, NJ home, Wednesday, November 3, 2015.

“We always wanted a big family,” explained Dorothy, as Charles, her husband, nodded, and a circle of children smiled while the couple explained their mission to a reporter visiting their Sicklerville home.

Many are children with special needs, who reminded Dorothy of her sister, Dawn, who wore leg braces and died while still a child.

They are the children considered hard to place, older twins, children with cerebral palsy, spina bifida, learning disabilities, a child returned to an agency after a failed adoption: the so-called “unwanted children” that became hers and her husband’s family in their South Jersey home.

Her email – mama2many12 – spells out her devotion to serial motherhood.

Her first-born, Alisia, was premature and spent two months hospitalized in Philadelphia, first at Pennsylvania Hospital, and then at Children’s Hospital.

The next 10 children were all adopted:

• Emily, 25, a premie with learning disabilities.

• Raymond, 23, adopted at the age of five, with a spinal cord injury.

• Shanise, 22, whose learning disabilities bounced her through eight foster homes.

• Isaiah, 17, born with heart issues and the recipient of a transplant two years ago at the age of 15.

• Jesse, 16, born with spina bifida and adopted at the age of three.

• Haitian-born Gianna, born with severe cerebral palsy that left her non-verbal and highly dependent, not adopted until she was five-years-old. She died earlier this year at the age of 13.

• Joshua and Serena, both 12, twins who had been close to being separated and adopted out, but instead adopted together by the Becks when they were already 18 months old.

• And Shamar, 6, with cerebral palsy, adopted at seven months.

A pre-school-aged granddaughter, Melanie, also lives with them.

And while it’s been years since their last adoption, Dorothy and Charles Beck are thinking again about bringing another child into their home.

“God put it on our hearts to adopt again. We do not have a completed home study yet, but want to adopt another child with special medical needs, possibly with cerebral palsy,” Dorothy Beck explained.

“From taking care of both Shamar and Gianna, we have experienced the unconditional love and joy that these children radiate. “We always put in for the children with health issues.”

The couple had not set out to specialize in taking on responsibilities for kids with specials needs.

But they discovered it could be a 10-year wait to adopt an infant child of their same race without any special issues.

“We wouldn’t have wanted to wait,” said Dorothy, a full-time mother.

They’ve adapted. Each of the Becks drives a minivan, the better to accommodate the many children, some of which need locomotion assistance.

Vacations mean renting one oversized van. Breakfast, in particular, is a “rush.” Holiday dinners mean having as many as 16 at the crowded table.

“We have a good system,” said Charles, who oversees quality control for a refrigeration company. And they’ve worked out a means of getting everyone off to doctors' appointments and such on a schedule.

Josh, one of the 12-year-old twins, admits to sometimes wanting a bit more privacy, but most of the time he says his big family is “pretty awesome. Fun. Exciting.”

The couple was honored earlier this year by Congress as “Angels in Adoption.”

Unhesitatingly, Dorothy says laundry is the biggest challenge, followed by maintaining the repetitive structure needs to assist her children with learning disabilities.

But she also thinks more families thinking about adoption should consider children with disabilities.

On Friday, a day ahead of "National Adoption Day," 41 families in Camden County will finalize adoptions and celebrate with lunch.