Also, an update on Khalil Herbert and Jerry Jeudy... 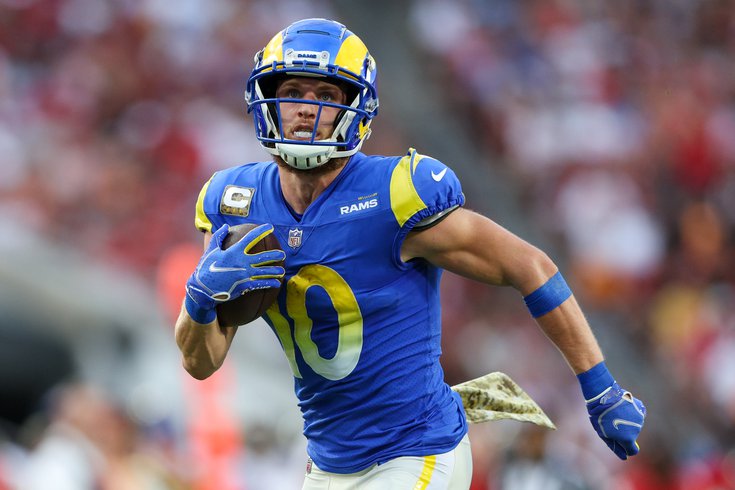 Cooper Kupp could miss some time.

We're right in the heart of the fantasy football season and hopefully your team is still in the mix for a playoff spot. Depending on your league, the trade deadline has either passed or is closely approaching with NFL's Week 11 on the horizon next weekend.

There has already been a bevy of impactful injuries this season that have no doubt impacted your league and your fantasy playoff hopes. As we turn the page on another week in the NFL, here's a brief look at the latest news regarding some of the most important fantasy stars who left their respective games with some kind of injury designation:

Kupp has arguably been the only playable offensive player from an underachieving Rams team this season and he may be on the shelf for a bit after hurting his ankle Sunday. Reports say he avoided the worst-case scenario and his ailment is not season-ending. There will be a lot more information leaking out in the next few days but it does seem likely that Kupp will miss multiple weeks of action.

After a pretty solid start to his last outing, including a touchdown run, Fournette left and did not return with a hip injury. The veteran back has already been losing reps to rookie Rachaad White, who now becomes a player worth rostering in every league regardless of Fournette's hip in Week 11.

Here's another running back who left and did not return with a hip injury. The second-year man has been gaining steam as a backfield splitter opposite David Montgomery in recent weeks but could miss Week 11, making Montgomery a very appealing start. We'll learn more about the severity of this injury in a few days' time.

A brutal hit to the head ended Smith-Schuster's Week 10 and sent him to the locker room with a concussion. The Chiefs have a crowded wide receivers room now, and it's really hard to anticipate if anyone's stats will be positively affected by a potential absence next week and beyond.

Arizona was already short-handed in Week 10 with Kyler Murray unable to suit up. The injury bug bit again, as a knee injury took Ertz out of the game after one catch. It may not be a torn ACL, early reports say, but it does look like a pretty bad setback that will cost Ertz playing time.

An injury to the back of the ankle knocked Jeudy out after one target, but the buzz is that it is not a torn Achilles. If it is a more minor injury he'll hopefully be back on the field without missing too many games.

Everett has had an up and down, but also productive season for Los Angeles. A groin injury ended his stint on the field on Sunday Night. He'll be worth monitoring in practice this week.