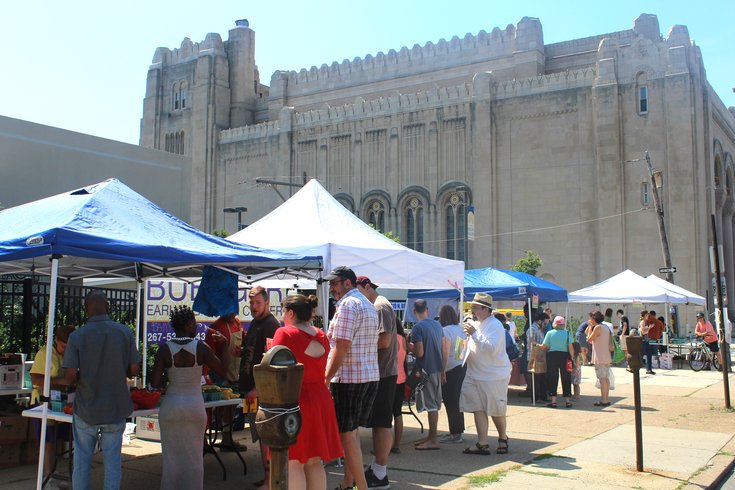 Patrons shop for produce at the North Broad Street-located Common Ground Marketplace during its Summer 2014 season.

In conjunction with the dedication of Rodeph Shalom Congregation's $18 million synagogue renovation this Sunday, The Food Trust announced it will partner with the congregation to preview its second season of Common Ground Marketplace.

The farmers market, which "celebrates the connection between congregation and community," is expanding its offerings this year with health and social services, like free checkups from the Sheller 11th Street Family Health Services of Drexel University and test rides of the Indego Philly bike share.

Food items, meanwhile, are as follows:

• A slew of sweet and savory delights from guest food trucks

The marketplace will make regular appearances starting Sunday, July 12, from noon-4 p.m. every Sunday until Thanksgiving.

Carol Perloff, spokesperson for Rodeph Shalom, told PhillyVoice that the dedication of the synagogue's expanded space, set to take place at 12:30 p.m. across the street from the market, will include a "hard-hat tour" of the expansion, as well as a lineup of speakers that includes Israeli consulate Yaron Sideman, philanthropists Alan and Constance Buerger (for whom the expansion is named) and three unspecified political figures.

The 17,500-square-foot, four-story meeting and classroom space designed by KieranTimberlake is partly made with Jerusalem stone and reclaimed stained-glass windows from the structure's original state in 1927. Perloff said the new space, which is still under construction, will open in mid-summer and establish the synagogue as a "beacon on Broad Street."