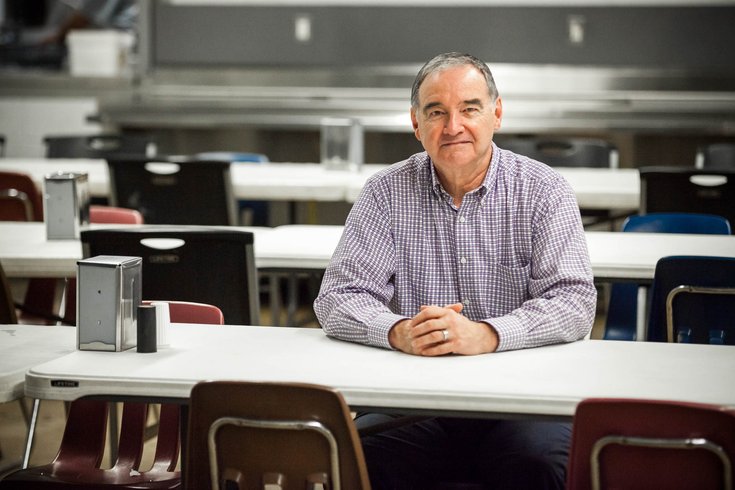 Dick McMillen, executive director of the Sunday Breakfast Rescue Mission, in the dining room and chapel of the Callowhill location.

Shaped in part by a family that struggled with alcoholism, Sunday Breakfast Rescue Mission Executive Director Dick McMillen always imagined he'd be on the other side of the helping hand.

"I think I was more likely to end up as a client of Rescue Mission than a staff person," McMillen, 66, told PhillyVoice.

But through his unwavering faith and a built-in sense of empathy that shone through after volunteering at rescue missions during his youth, the New Castle, Pa., native managed to work his way up the ranks of rescue missions to ultimately, in 2003, take the reins as head of Sunday Breakfast in Callowhill -- originally founded in 1878 by John Wanamaker, John Stetson, Atlee Burpee and James Pollock. Since then, McMillen's helped to establish the long-running homeless shelter as a staple of service in Center City, doling out 500 meals per day with the help of 7,500 volunteers this year.

Here, McMillen discusses the sense of fulfillment that comes with work at the homeless shelter, how he stays grounded and why he might be better classified as a "fearful leader."

What drew you to this kind of work?

I’ve been involved in it for 46 years now, and when I was in high school I started volunteering at a rescue mission in my hometown that worked with homeless and low-income young people, and I volunteered and little did I know what it would end up leading to for the rest of my life. It was mainly a boys' work room in a summer day camp and an evening program, so that got me started and introduced to the different kinds of programs that rescue missions have. And I built a relationship with a fellow who was my boss; he ended up going to York, Pa., to become director of admission there, and I became youth director [there] during my college years.

What about working at the homeless shelter is most fulfilling for you?

Oh, seeing peoples' lives change is the most fulfilling part. I’ve had the privilege of, over the years, to see individuals who had serious addiction problems overcome their addiction. I’ve seen individuals with other kinds of situations that their life is just falling apart and they’re putting their life back together piece by piece, and to see those changes is the thrill.

What's the biggest challenge of keeping the gears turning at a homeless shelter like Sunday Breakfast?

Financial responsibilities is always a challenge. We’re totally supported by donations; we don’t’ receive government funding. And we are that way because we are a faith-based ministry -- we wanna be free to share that God can make a difference in a person's life. That financial challenge is one of the things.

And I think one of the other challenges at times, it’s been where someone has been hardened over the years and they’re in and out and back in with their addiction -- which is recidivism and is the danger of addiction -- and dealing with those individuals who come in for the seventh, eighth or ninth time and trying to reach out to them. But I’ve seen situations where the light bulb finally comes on and they realize they can’t live life anymore this way. So to get them before death happens is certainly the thing there.

How has this job at Sunday Breakfast changed you?

I’ve certainly become more accepting. I think I’m a bit more loving. I extend some grace to more people because I actually came out of a background growing up with an alcoholic family myself, so it was a real opportunity for me to see that kind of change in life that, again, dramatically happens.

… Sometimes we face a difficult situation and we say ‘Woe is me, why do I have to go through this,’ but sometimes those situations strengthen us and give us the ability to help those who need to be helped.

What do you think is an important leadership quality to have, when it comes to solving the larger problem of homelessness?

An attitude of service. If you’re too high and mighty that’s not what’s needed. Really reaching out and serving others and not thinking you’re better than any of them. Having humility. To realize that, but through the grace of God, that could be me. And I think my background has helped me that way.

... I don’t see myself as better than others, but instead have the opportunity to walk with them a bit. And hopefully in that process they will learn, and I will certainly learn too.

What are some upcoming holiday services at Sunday Breakfast?

Well, we have a special food drive. We are dependent upon donated items. We do buy some [foods], but a lot of donated food comes in and helps us provide approximately 500 meals per day, so that food drive is one of the things. We’re also constantly in need of volunteers. And we have a special need right now to get some renovations to our learning center which faced a little bit of an internal flood, so we have to renovate that because we try to help individuals get their GED and do tutoring and build out resumes, and getting that part of our facility back up is something we’re especially working on right now.

McMillen: I don’t see myself as better than others, but instead have the opportunity to walk with them a bit. And hopefully in that process they will learn, and I will certainly learn too.

What does being 'fearless' mean to you?

Being fearless almost means being 'fearful' sometimes. That I can’t do enough to help someone, or I won’t have the resources to provide them, or that we won’t be able to come up with the way to intercede in their life at that particular point. Being fearless actually has a little bit of that fearfulness. A little bit of the reverse. You can call me the ‘Fearful Leader.'

What have you done as a leader at Sunday Breakfast that you consider fearless?

There have been, from time to time, situations where -- let’s say we don’t normally deal with the 'country club' set at the mission, and there’s been situations where there has been the potential of danger, and trying to deal with fellows in the proper way and not put any of our staff in that position without me being willing to take a lead in that.