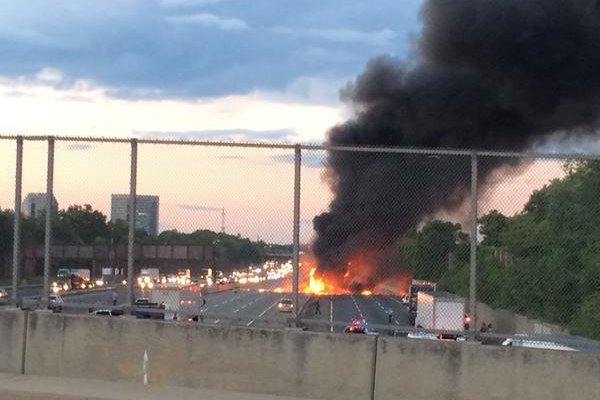 The scene after a fiery crash between two tractor trailers on the New Jersey Turnpike Wednesday.

Police say that there were minor injuries to the drivers, but no fatalities, and that delays are expected.

Crash on NJTPK MP 82. NO FATALITY. Traffic getting by on left lane and left shoulder of inners.

The crash resulted in a fiery scene, and reports of the fire started coming in around 8 p.m., according to NJ.com. The right and center lanes remain closed around Interchange 9, however traffic is getting by on the left lane and shoulder after being reopened around 9 p.m.

Social media pictures from the scene showed traffic backed up as well as the aftermath of the crash.

nbd just an explosion on the turnpike RIGHT BY MY HOUSE pic.twitter.com/5T6SPpya8X

On way back to Phila. Vehicle fire on New Jersey turnpike near New Brunswick. EMS on the scene. pic.twitter.com/oYqVu4exgr