Bobby Barnes died in November from injuries suffered in brutal attack; his family turned tragedy into comfort on Sunday

When her brother Bobby died from injuries sustained in a brutal beating outside an Olney gas station, Diane Barnes set her mind to turning tragedy into some semblance of positivity.

So, she established a GoFundMe campaign in late November with the goal of raising money to, in part, launch a shoes-for-the-homeless effort. The idea, for which $4,600 has been raised, was inspired by Bobby Barnes telling his sister about the regularity with which the homeless need to replace their sneakers.

On Sunday afternoon, Barnes saw the fruits of her labor and compassion come into clear focus with a “Boots For The Homeless” table at the “Hope For The Homeless” event at the 23rd Street Armory in Center City.

According to court records, the preliminary hearing for the suspects – Aleathea Gillard, 34; Shareena Joachim, 23; and Kaisha Duggins, 24 – is scheduled for March 9.

At the event tied to Jason Pinardo’s plan to sustain a pop-up restaurant for the homeless, Diane Barnes and a handful of volunteers saw that 50 pairs of work boots she’d purchased at Payless ShoeSource made their way onto the feet of those in need.

Upon learning of their simultaneous but distinct efforts to help Philadelphia’s homeless, Barnes said Pinardo kindly allowed her to set up a table at the event, which featured butlered hors d’oeuvres, a sit-down dinner and a photographer who took pictures that the homeless attendees could keep in their wallets.

“Everybody was mingling and when they came to my table, it wasn’t just about getting free work boots. I had a picture of Bobby there, and I told his story,” Diane Barnes said Monday. “Some of the people said ‘Oh yeah, we remember that story.’ So I told them that’s why I’m doing this. It was so moving. And when they took their shoes off to try the boots on, oh my gosh, you could see they needed them so badly.”

Barnes’ GoFundMe page is still active, and she hopes to continue the effort into the future, noting that she plans to set up similar tables at next year’s Hope for the Homeless event and beyond. On hand to help her Sunday was her sister Debbie, daughter Ashley O'Leary, niece Angelica, nephew Richie, cousin Linda Smith and friends Patsy Sorrentino and Eva Marie.

In the future, Barnes plans to have women’s shoes available as well, since this year was focused solely on men’s boots.

“They walked out with smiles on their faces. They’re not used to getting brand-new stuff,” she said. “Some told us their stories. I’m happy that we were able to get out and do what our goal was.” 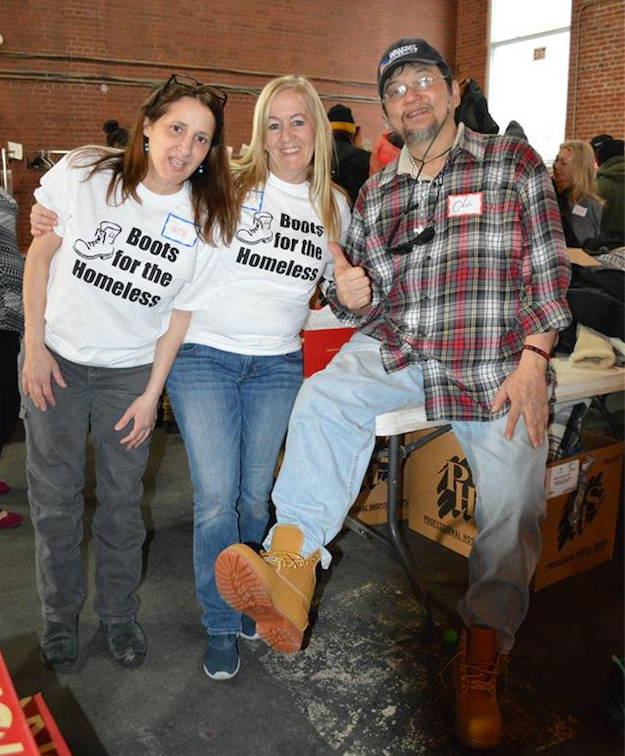 On Sunday, Diane Barnes (center) and volunteers distributed 50 pairs of boots to homeless Philadelphia men in honor of her brother Bobby, who died from injuries sustained in a brutal April beating outside an Olney gas station.

While this was the first event tied to the fundraising effort, the criminal case tied to Bobby Barnes' death is about to return to the Criminal Justice Center this month.

According to court records, the preliminary hearing for the suspects – Aleathea Gillard, 34; Shareena Joachim, 23; and Kaisha Duggins, 24 – is scheduled for March 9.

The suspects are accused of attacking Barnes outside a Sunoco gas station at Fifth Street and Somerville Avenue on April 7.

Three youths – a 12-year-old girl and 13- and 14-year-old boys – were sentenced on assault charges in July. Their charges have since been upgraded, as well, and at least one of them has pleaded guilty to charges including third-degree murder.

The assault allegedly was precipitated by Gillard's 10-year-old son claiming Barnes hit him during an argument about who would pump gas for customers, an allegation that investigators later dismissed. Investigators said they later learned that the boy fell off his bicycle on the way home and made up a story to avoid getting in trouble for being late.

Barnes remained comatose in the months after the beating until his death on Nov. 25, 2015. In early December, mourners, including Sister Mary Scullion of Project HOME, gathered at Manayunk’s St. John the Baptist Roman Catholic Church to remember a man who battled alcoholism and the perils of homelessness.