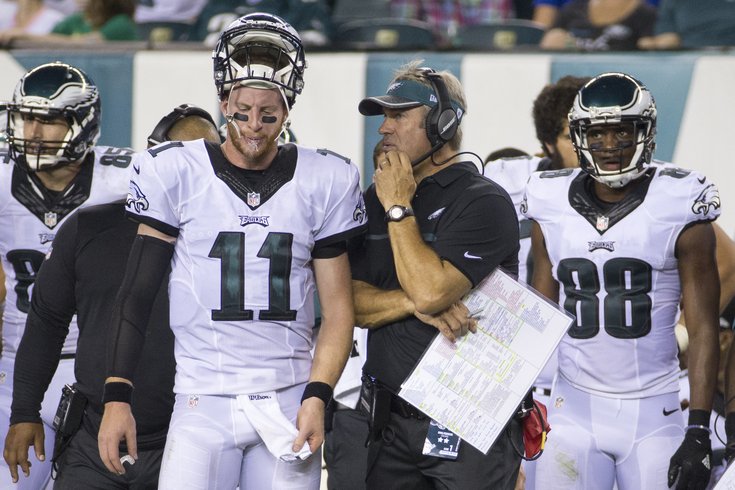 And so we come to the end of the preseason. The Eagles will cut their roster down to 53 players by Saturday at 4:00 p.m., although they've historically announced their cuts much sooner. Here's our final crack at the final 53-man roster.

First we'll show the depth chart as a whole, with a highly scientific color-coded system showing starters, reserves, inactives, "other" (cough, Lane Johnson, cough) and practice squad guys. And then we'll do a quick rundown at each position.

The quarterback position is a rare layup when projecting the 53-man roster. To start the season, Sam Bradford will be the starter, Chase Daniel the backup, and Carson Wentz the inactive rookie / future face of the franchise.

Rookie fifth-round pick Wendell Smallwood did not play in the first two preseason games, but the team loves what he can do as a receiver out of the backfield. He'll make the team, but will likely be inactive to start the season. Kenjon Barner had a decent camp. With Smallwood suffering setbacks, Barner feels like a lock at this point to make the team as a reserve at running back as well as at both returner positions.

We had Paul Turner making the team back on August 9th, and he's only strengthened his standing on this team since then, having an impressive showing in the Eagles' preseason games. With the addition of Dorial Green-Beckham, a few of the veteran receivers were left out of the mix.

That said, Turner could be that unfortunate guy who makes the team, only to be cut when the Eagles sign another team's wide receiver after final cuts.

At the tight end position, I don't think Chris Pantale should make the final 53-man roster, but for a while, I thought he would because he plays on every special teams unit. Now it's simply unjustifiable. The Eagles will roll with just three.

With Allen Barbre having to kick out to RT in relief of the soon-to-be-suspended Lane Johnson, it appears as thought the Eagles plan on rolling with Isaac Seumalo as their starting LG in place of Barbre. Beyond the starting five, Matt Tobin and Stefen Wisniewski are locks, while rookie fifth-round pick Halapoulivaati Vaitai may be a big beneficiary of the Eagles having traded away Dennis Kelly.

The one young player worth noting here is Dillon Gordon, who has played LT, FB, and TE so far with the Eagles this offseason. We covered Gordon in depth a few weeks ago, but he is a player who has shown enough raw ability that I would be hesitant to expose him to the other 31 teams around the league by trying to sneak him onto the practice squad.

The Eagles do not yet know the status of Lane Johnson, so he'll have to count against the 53-man roster for now.

Marcus Smith is probably going to make the team, especially with some losses of other players on the roster, like Joe Walker, for example. Are you going to keep a guy like Myke Tavarres over Smith, when you can safely stash Tavarres on the practice squad? In my view, no. Smith has been an enormously disappointing player over the last two years, but for the first time with the Eagles he's at least going to have a significantly increased role on special teams, which has value.

At DT, with the Eagles making the surprising move to cut Mike Martin, that opens up a spot for undrafted rookie Destiny Vaeao, who had a strong camp.

In this scenario, I have the Eagles keeping 11 defensive linemen, 10 if you consider Bryan Braman nothing more than a special teams stud.

With the Eagles having signed LB Stephen Tulloch, their depth is better. Najee Goode can fill in at either OLB spot, while Tulloch can play in the middle. To be determined if Jim Schwartz gets cute and tries to get Tulloch on the field in a more prominent role in the middle of the defense, at the cost of Mychal Kendricks' playing time (with Jordan Hicks kicking out to the WILL spot).

This is another spot where the Eagles could add a veteran after final cuts.

Nolan Carroll has balled this offseason while recovering from an injured ankle. He seems to have taken a stronghold on a starting corner spot opposite Leodis McKelvin, while Ron Brooks will be the "starting" nickel.

Eric Rowe will provide depth on the outside, and I see rookie Jalen Mills as a slot corner only because of his lack of deep speed. C.J. Smith has had a good preseason, so it's hard to leave him off, but the Eagles should easily get him onto the practice squad.

The Eagles have one of the best starting safety tandems in the NFL in Malcolm Jenkins and Rodney McLeod. Beyond the starters, Chris Maragos is a stud special teamer and a competent reserve safety. Jaylen Watkins has always had good cover skills, but couldn't tackle to save his life. While he's certainly not Steve Atwater, Watkins has improved his tackling enough to earn a roster spot.

The only camp battle here is Cody Parkey vs. Caleb Sturgis, with Sturgis clearly having out-kicked Parkey all throughout training camp and the preseason.