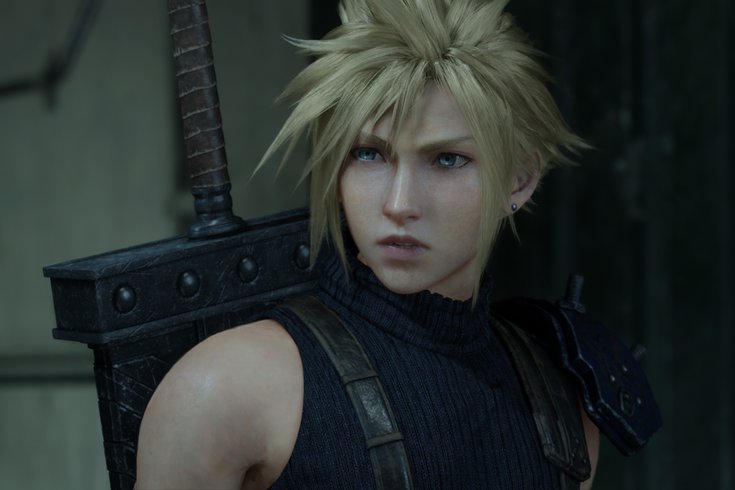 Cloud Strife is back.

How do you explain the historical baggage of a Final Fantasy VII remake to someone who is unfamiliar with the game and the series? Depending on who you ask, someone may tell you the original FFVII is the single most important experience of a decades-old medium or the most overrated game ever made.

Many who missed out on it near release in 1997 have found the original hard to break into today, with the game's blocky 3D visually jarring compared to anything released within the last decade. And after being stuck in development hell for years after an official reveal in 2015, the release of the Final Fantasy VII remake feels perfectly timed during a worldwide collapse of norms.

If you missed out on it then or want to take a walk with an old friend, a built-from-the-ground-up version of this classic is now available. So what are you getting into, and is it worth sinking your teeth and your cash into during quarantine?

(A brief note — if this doesn't make it clear, I'll probably begin dabbling in other subject matter I have written about previously over the years with sports in short supply. Since my favorite reviews of games seek to answer the question, "Should you buy/play this game?" that is what I hope to help you figure out if you're reading this.) 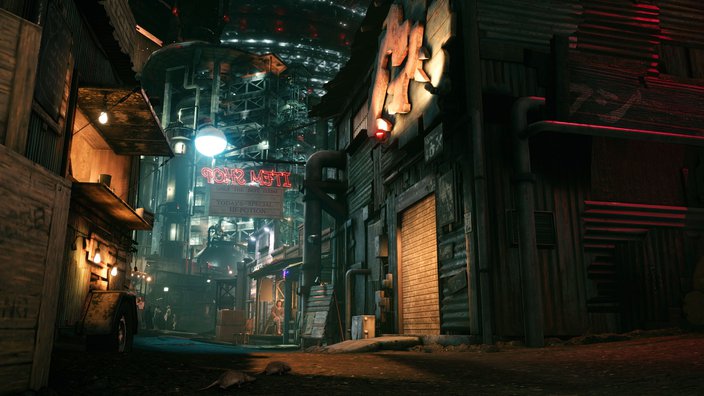 Final Fantasy VII Remake is a faithful echo of the original and a complete teardown of its structure. The story beats are the same early — you follow Cloud Strife, an ex-SOLDIER mercenary who joins an eco-terrorist group set on taking down a corporation draining the life from the planet. Early game scenes are almost shot-for-shot replications of the original game, updated and polished beyond belief for 2020. The characters of the game are still its strength, and while the tone of the writing jumps erratically, allies that seem paper-thin on first glance show depth over time.

But the turn-based structure of traditional Final Fantasy games is harder to sell than it was in 1997 when FFVII actually juiced up the activity of the series relative to earlier titles. And so the core gameplay of Final Fantasy VII Remake is a complete reimagining of how you move from start to finish, closer to hack-and-slash games like God of War or Devil May Cry than a traditional JRPG. It is stunningly effective, with more powerful abilities accessible through two-button shortcuts or a mid-fight menu that brings the action to a screeching halt to allow you to assess your options.

It's a middle ground that should appease traditionalists and people looking for a more active, accessible version of a game they've been hearing about for decades. Despite breaking from the turn-by-turn party system, Remake's mechanics force you to use each member of your crew during every big fight.

Barrett, the gruff leader of AVALANCHE with a gun for a hand, is the man you have to turn to for ranged attacks in the early game, for example. Members of your team can even learn abilities that draw attention and damage off of their teammates, opening windows for others to attack through. But FFVII's materia system still allows you to slot abilities and powers across characters as you wish, which gives you the freedom to build the party out as you choose instead of feeling locked into specific move sets as the game wears on.

The scope of FFVII Remake is the other big change. Midgar, the setting for the entirety of Remake, was originally a 5-6 hour warmup section of a game that would stretch past 70 hours for most complete playthroughs. This dramatic change comes with its own challenges. How do you keep the spirit of the old game without overstretching old content? How do you add new components without it feeling unnatural?

The answer is that you don't, at least not always. FFVII remake's pacing suffers as a result of the changes. Reactor bombing sections are filled with action and impactful decisions, a joy to play through in their new form, but much of your time in Midgar's slums is padded with filler quests and content, even sections where Cloud is forced to walk at agonizingly slow speeds to allow for brief moments of storytelling or foreshadowing. There is an effort to give the heroes a sense of grounding in the communities they live in, but for a group of characters focused on impossibly high stakes, some of the tasks feel humiliatingly unimportant.

Those warts aside, Square Enix managed to deliver a product that drastically overhauled the combat system and still remained faithful to its inspiration. 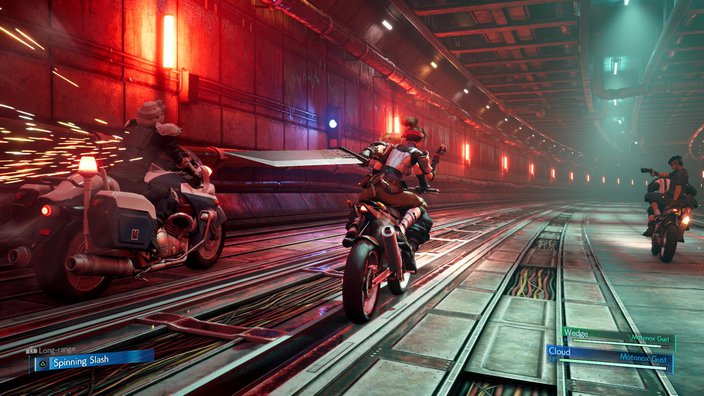 There are times Final Fantasy VII Remake looks and sounds like the most beautiful game you'll ever play. If you showed someone a side-by-side image of scenes from the original vs. those same scenes in the updated version, you would think they came from a different lifetime.

Seeing Midgar from a different perspective actually adds weight to the setting and story. A class system leaves poor citizens levels below the elite class, separated physically by gargantuan steel plates, but due to technological limitations, this was only really spoken of, rather than shown in the 1997 original. Standing at the bottom of the slums in Remake, you can view the weight and height of the class struggle for yourself.

The game shines most at night, on the runs your team makes to upend this system and fight for the planet's health. It is cyberpunk at its core, a world with bright, neon lights and advanced technology that harvested a significant energy source at a great cost to many citizens. Less imposing imagery — most notably Stamp the beagle, a piece of military propaganda your group repurposes as a navigation tool — is a reminder of simpler times. Combat is flashy, especially when you start incorporating summons into the grander boss fights the game has to offer.

Beautiful songs and string music from the original return for Remake with more punch, the stakes of a given moment almost always clear. Turning the game on and hearing a crisp version of the same menu music you heard two decades prior is a delight. You are no longer serenaded by the traditional Final Fantasy victory music after each battle (it does pop up sporadically throughout the game) but the overall soundtrack quality is exceptional, and you're able to accumulate the individual songs from shopkeepers and mixtape peddlers to play at your leisure throughout the game.

The portion of the story in Wall Market, home of Midgar's seedy red-light district, is exceptionally well-realized, jam-packed with memorable fights, eclectic songs, and vibrant characters. A turn down the wrong alley could dump you out in front of a hand massage parlor or a brothel, music transitioning from vibrant jazz to a sitar-backed theme, potential allies deceiving you along the way.

The dialogue is not without its hiccups, but the original FFVII was plagued with mistranslations and clunky dialogue, a feature of many games from that era. This version of FFVII fixes that problem, and Remake's cast does well to bring these text-based interactions to life. Essential characters feel more human now than they ever did in the original, though Barrett's characterization remaining true to his blaxploitation-ish roots is an obvious sore spot.

It does have technical issues of varying severity, and the camera system is perhaps the game's biggest flaw. During combat, it is not always reliable, even (and sometimes especially) when you use the lock-on feature to track specific enemies in chaotic fights. Assuming you're not playing on the easier difficulty modes, this has real consequences in the toughest fights the game has to offer and may stop you from getting off an important combo or healing spell to turn the fight in your favor, forcing you to regroup more often than should be necessary.

FFVII Remake also features a fair amount of cut corners. The character models for the main party look absolutely spectacular, as do many of the game's cutscenes, but walking through the Sector 7 slums there are NPCs, signs, and entire buildings that look grainy and out of place. On a standard PS4, walking from dark-to-light or light-to-dark areas often requires waiting a second or two for the game to catch up. In some pivotal story building scenes, the audio mix is downright horrific, with idle chatter from nearby NPCs drowning out important dialogue that can only be kept up with through the game's subtitles. That makes the world feel more real and alive at the cost of tracking the story beats, which isn't a trade-off that has to be made.

When you're remaking an already beloved property, the expectation is usually to approach perfection. That is not what Square Enix offered here, nor is their remake dead set on staying true to the original formula in the first place. It is the rare remade game that struggles with things normal video games do, from polish to meaningful side content.

But if you played and enjoyed the original game at any point in your life, there is no way to avoid feeling captured by the spirit that still lingers, and if you are a new player, I suspect the charm that hooked millions of others over the years may sink its teeth into you, too. A serious (and surprisingly relevant) story is told without charm, humor, or even absurdity being crushed. It is still the RPG where you fight a flying house, after all.

(Older players — I have not yet reached the game's conclusion as of this writing, which I have heard breaks dramatically from the namesake. If faithful recreation is the only standard you are judging this by, I can't earnestly tell you whether this is worth your money or not.)

For this writer, Final Fantasy VII Remake was able to bring me back to memories of childhood without needing to hold onto nostalgia too tightly, delivering a great game that doesn't sacrifice great characters in the process. With every entertainment company in the world competing for my attention, this game has managed to capture it.