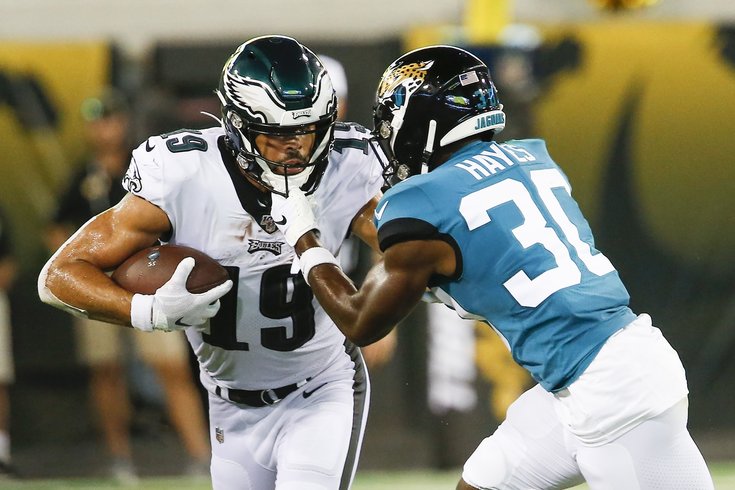 The Eagles did not escape injury-free, but they handed the Jacksonville Jaguars a 24-10 defeat on the road Thursday night, and Philadelphia looked good in every phase of the game in their second preseason game.

• Given what we have seen so far in the preseason, can't we say it is indisputably good that Carson Wentz has not taken an in-game snap? If Philadelphia's starting offensive line was on the field with him, it would be a much different story, but it would be completely negligent to throw him out on the field with a group of backups who haven't been able to protect any of Nate Sudfeld, Cody Kessler, or Clayton Thorson.

Would your game-watching experience and my job be much more exciting if Wentz was playing? You bet. Nowhere near worth the risk on the Eagles' end, though.

• I don't think anyone is going to come away from Thursday's game thinking, "Boy, that Clayton Thorson is the future!" But I do think it's important that we have seen some things to work with from the Northwestern product, because there needs to be some reason to justify keeping him around as a developmental product.

We saw some of that against Jacksonville. Thorson admittedly got pretty good protection for a lot of the night, but he was still good while under duress, and he had the opportunity to take a lot more chances with extended reps. That ended up being the best thing for him, with Thorson looking downfield and challenging the Jags' secondary. The only interception he ended up throwing on the evening was not really his fault, with a ball bouncing off DeAndre Thompkins hands into the gut of a Jaguars defender.

You can come away from that performance and think there is something there to work with, especially when you consider that he did it with second and third stringers surrounding him. After being summoned from the bench as an injury replacement, he did as well as you could hope.

With Cody Kessler in the concussion protocol, we may end up seeing Thorson as the primary backup in Week 1, though, and that's still a pretty scary thought. Just enjoy the small victories for now.

• A group that deserves credit for Thorson's big night? The offensive line. After allowing Kessler to get popped early, the group got their act together and kept the fourth-string QB upright and clean for most of the evening.

The rushing attack also looked much better than it did against Tennessee, and that was true for basically all four quarters. Pretty dominant night for the big boys in the trenches.

• Doug Pederson's challenge on a pass interference call in the end zone was a good decision on merit — there was obviously interference on the tape, and the Eagles won as a result — but I think it was good for him to throw the flag for long-term purposes, too.

As we have seen with the league's enforcement of the catch rule, it's not always going to be obvious what will and won't be called even when replay is involved. Since this is the first time PI has been challengable, every decision becomes a data point for the coaching staff to study. It may just be one call (and one I thought was reasonably obvious), but that's something the Eagles' coaching staff has under their belts now.

• A 52-yard bomb from Jake Elliott through the rain is business as usual, but it's not as easy as he made it look.

• They ended up conceding a touchdown while defending a short field in the fourth quarter, but overall it was a great night at the office for Philadelphia's defense from top to bottom. There were contributions from starters like Malcolm Jenkins early, flashes from guys fighting for spots on the defensive line, and a collective pride from the group that shone through in the way they finished plays.

You wouldn't have needed to be the '85 Bears to stop the Jaguars offense that was out there on Thursday, but even still, the group went out and took care of business the way they should have. They consistently got off of the field and allowed their young QB to get plenty of reps — that's a good thing.

• Related to the challenge thoughts above — that pass interference rule is almost certainly going to be infuriating and cause at least one total meltdown in Philadelphia this season, I guarantee it.

• Before the game was over, the Eagles shared with reporters that Cody Kessler is officially in the concussion protocol, and that is bad for both Kessler and the team for reasons that should be obvious. While everyone will hope it's of the mild variety and he should be okay to go sooner rather than later, this will at least force the Eagles to bring in another camp body.

It's also not exactly clear what the Eagles will choose to do behind Wentz to start the season. Kessler, in theory, is still the guy with experience who can step in if Carson Wentz gets hurt, but that's now dependent on how severe this head injury is. If he can't get on the field, he's not much help to this group.

But hey, the good news is that Wentz guy is still the no-doubt starter, and it'll all hinge on keeping him healthy. There's no Nick Foles to save the day anymore, and Eagles fans are going to have to adjust to that new reality.

• When the guy playing quarterback is basically being called Mr. Magoo by his own press box announcer, it may be a sign that nobody needs to be watching the fourth quarter of preseason football games. Or playing in them.

Truth be told, he was actually pretty good! Failing that, he was at least entertaining, which people (myself included) often confuse with good.

I still believe none of us should be watching this late in a preseason game, and I will not change this stance.