What they're saying: Fantasy football experts high on Wentz, Sanders and other Eagles players 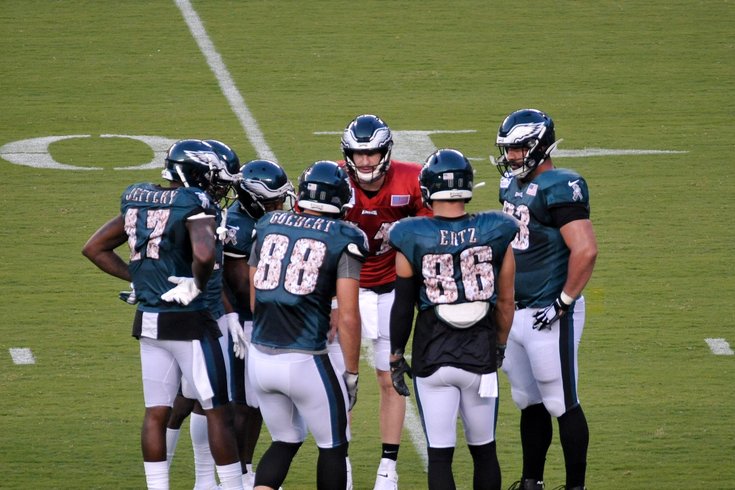 The Philadelphia Eagles offense huddles up during their open practice at the Linc.

We're about to combine your two favorite things: fantasy football and the Philadelphia Eagles.

All across the internet we couldn't help but find ourselves fascinated by the fantasy football-minded takes on players we've been watching closely in training camp as Preseason Week 2 arrives. Most fantasy football drafts will be taking place sometime over the next three weeks, and as such there has been a flurry of information and takes on Eagles players.

Here's a look at some of the most interesting attempts by big time fantasy football content producers to try and place value on Philly offensive stars:

For those of you who are regular consumers of fantasy football content, Matthew Berry's weekly love/hate columns are a good source of analysis and takes on who to lean toward during the regular season. A few days ago, Berry did a season preview edition of love/hate and the Eagles' franchise quarterback was very high on his list. Here's why:

Since the start of 2017, [Carson] Wentz has been the fifth-best quarterback in fantasy on a points-per-game basis. Yes, points per game. No full-season stats here, and that's the rub, isn't it? We don't question the talent, just whether he can stay on the field to maximize it. The fact that the Eagles' front office, which I assure you knows a lot more about Wentz's health than you or I, thought he was worth $107 million guaranteed says something. If you won't trust in Wentz's health, will you trust in Doug Pederson's offense? Since he took over, the Birds are sixth in pass attempts, fifth in percentage of goal-to-go yards that come via the pass and 13th or better in passing touchdowns, passing yards and QB fantasy points. Kids, Pederson is a former NFL QB himself who loves to throw and has a fantasy-friendly offense. An offense that, by the way, added DeSean Jackson in the offseason. Don't underestimate what that will bring to the offense. Over the past two years, Wentz has been top 10 in the NFL in air yards per pass attempt, deep touchdown passes and deep touchdown percentage. [ESPN]

We are sticking with Berry for one more entry, as he has a prominent Eagle on his "hate" list as well — one who you may disagree with: Zach Ertz. While he still has Ertz as a top three tight end, he has low expectations for production. Why? Well, because the offense is loaded.

With Dallas Goedert emerging, the addition to DeSean Jackson and Miles Sanders, getting Darren Sproles, Alshon Jeffery and Nelson Agholor back, plus talented rookie JJ Arcega-Whiteside, it's just hard to see Ertz getting that kind of volume. [ESPN]

Favorite value in the fantasy universe

Miles Sanders is getting a ton of love from nearly every fantasy guru there is — even from our own Jimmy Kempski. Forbes' guru, Zach Petersel, is on board the Sanders train too, naming him one of three mid-round sleepers to target. He does a deep dive on Sanders you can read here, but we've grabbed our favorite nugget of analysis:

Under Doug Pederson, the Eagles have been known for using a RBBC approach. In his 53 games, a running back has played over 60% of the snaps just three times, stat courtesy of NFL.com's Graham Barfield. This concept makes sense when you have the likes of Jay Ajayi, Josh Adams and Wendell Smallwood as your running backs. When you have a guy that produced a similar stat line to Saquon Barkley in his final year at Penn State, when you invest a second-round pick in a running back, when you have a guy showing out in camp, sometimes philosophies change.

1. He's getting more reps with the first-team offense.
2. He's the best RB on the field and it's not even close.
3. He's drawing comparisons to LeSean McCoy.
4. He's 'unquestionably the most complete and explosive back'.

... Even if he's not helping your lineup in Week 1, don't be shy. Sanders may be my favorite value in the fantasy universe right now and at his current price you should be jumping all over it too. [Forbes]

Here's another ringing endorsement from the New York Post, which led a fantasy football article last week with praise for Sanders' fantasy prospects.

ESPN looked at like 30 sleepers and busts for the upcoming season and veteran RB Jordan Howard was Field Yates' pick to overachieve in 2019. Here's what he had to say:

Over the past two seasons, there are just two players who have more rushing touchdowns than Howard's 18: Todd Gurley II and Alvin Kamara. The crown jewel of the Philly backfield right now appears to be Miles Sanders, the exciting second-round pick out of Penn State, but Eagles football czar Howie Roseman knows value when he sees it and swooped in to grab Howard from Chicago. The path to success for Howard doesn't need to be as a workhorse; if he could earn a backfield share comparable to LeGarrette Blount in 2017 (~12 carries a game as the lead red zone threat), he'll return value. [ESPN]

The Washington Post is also high on Howard — making for a confusing reality for fantasy football drafters: Howard and Sanders both appear to be "underrated" at running back. Here's Neil Greenberg on Howard:

Howard carried the ball 250 times for Chicago last season, producing 935 yards and nine touchdowns. He added 20 catches for 145 yards out of the backfield, but that wasn’t enough to keep him in a Bears uniform — the team traded him to the Philadelphia Eagles for a 2020 conditional sixth-round draft pick. [Washington Post]

If Ertz gets injured...

While we have a little bit of an issue with the reasoning in this Sports Illustrated piece, looking at Dallas Goedert as one of their top 10 breakout candidates, we don't have any problem with him being on this list. The Eagles have run more and more 12 personnel (two tight end) sets in practice this season and Goedert has looked fantastic alongside Zach Ertz. He also has shined when playing as the only tight end on the field this preseason, gaining 50 yards on three catches in limited action against the Titans. Here's why SI likes Goedert:

Call this a speculation play. If Zach Ertz gets injured at any point this season, Goedert's value jumps exponentially. The best part about drafting him is that he has standalone value even if Ertz stays healthy. The Eagles like to use the double tight end set in the red zone, and Goedert should easily eclipse last year’s numbers by 20%. Think 50 catches for 550 yards and five TDs without Ertz being injured. If Ertz is out, bump those numbers up to 70 catches for 800 yards and eight TDs. [Sports Illustrated]

This piece is a few weeks old but the analysis is intriguing. According to Section 215's Matty Breisch, Nelson Agholor has some explicit fantasy football value that is not appearing in any mainstream fantasy football content outlet. Overshadowed by weapons like Ertz, Howard, Sanders, Jackson, Jeffery and others, slot receiver Nelson Agholor may actually make quite an impact in 2019.

With contests on the books in 2019 against teams like the Green Bay Packers, the New York Jets, the Buffalo Bills, the Chicago Bears, and the Seattle Seahawks who have less than stellar (or proven) options on the inside in their nickel packages, it’s entirely possible Agholor could pass into triple digits in a half a dozen games this season, with the potential to go over the century mark for the first time in his career. [Section 215]