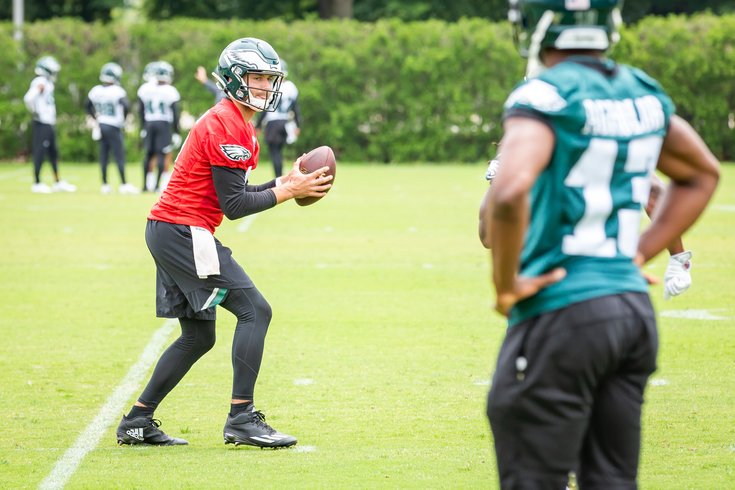 Koy Detmer did it. So did A.J. Feeley and Jeff Garcia.

And a guy named Nick Foles did it too — better than perhaps anyone ever has before or since.

The Eagles have a storied history of backup quarterbacks stepping up and succeeding against all odds. In 2019, it may fall to Cody Kessler — a player who fits the same mold — to lead Philadelphia should adversity strike the QB room again.

It already has, to a degree, as preseason No. 2 quarterback Nate Sudfeld will miss at least two regular season weeks with a broken wrist. The Eagles have made it clear they will not seek help to back up Carson Wentz (an injury prone superstar QB to say the least). It will be Kessler's opportunity should disaster strike.

"Cody has played games," head coach Doug Pederson said over the weekend. "He started games in this league. He’s a guy that’s has great toughness, as we saw the other night, and has really embraced the offense. He’s in a good position."

Kessler, 26, was an unimpressive 3-for-6 for 12 yards in a dreary 27-10 loss to the Titans to open the preseason back on Thursday. His track record also leaves a bit to be desired as his teams have gone 2-10 in his 12 career starts dating back to his 2016 debut with the Browns (though in his defense, the 2016 Browns had much bigger problems than Kessler).

It's hard not to notice that in 17 career NFL games (12 of them as a starter) Kessler has been sacked 49 times. Perhaps being 6-foot-1 (short by NFL quarterback standards) makes it harder for him to see down the field? He seems to have a lack of mobility, an issue that saw him get sacked 100 times in 41 starts at USC. He's surely never played behind an offensive line as good as the Eagles have, and getting on the same page with them is one of the biggest adjustments Kessler has had to make in the days since Thursday's injury put him with the 2's in practice.

"They've been the same," Kessler said Monday of playing with the second team offense. "This team is awesome, it doesn't matter if you're the starter or all the way down to a practice squad guy trying to make the roster. They really have a team environment on the field and in the locker room. The only thing has been getting on the same page with the No. 2 offensive line."

"It's just another opportunity, another game," Kessler continued, talking about the increased number of snaps he's likely to receive in Jacksonville this week. "You don't know how many you're going to get in this league so you have to take advantage of every one."

Kessler started the spring, theoretically, as the No. 4 quarterback behind Wentz, Sudfeld and fifth-round pick Clayton Thorson. But a slow-developing Thorson has allowed Kessler to — for now — leapfrog to second in line.

The fact that he's started and has actually won (two games last year with the Jaguars), is what appealed to Pederson and the Eagles in the first place.

"Having been through a couple different systems, you build up the background with the language and also the concepts," offensive coordinator Mike Groh said. "A lot of these passing concepts, they overlap."

His football knowledge and poise has showed on the practice field.

"Being with him a little bit in the huddles and stuff, he commands the huddle really well," Dallas Goedert, who has taken reps with all four quarterbacks this summer, said. "He is confident in himself, and as an offensive player it give you the confidence in him. I think he will do a good job as the No. 2 [quarterback]. If he gets in the game, he will know what to do."

Only twice in the last 15 years (2016 Wentz, 2008 Donovan McNabb) has a Philadelphia quarterback started all 16 games in a season. It's become a reality both in Philly and in the NFL as a whole, that sometimes some relief pitching is required to get through the season. Luckily for Kessler (and for Sudfeld, when he returns), the Birds are no strangers to changing speeds with a new quarterback under center.

"He goes in there and does his best to lead," Josh Adams said. "Going out there into a new offense and he has guys around him… everyone in that unit will do everything they can to make it easier for him."