What they're saying: Where does the Eagles offense rank — and do they have an age problem?

Plus a look at how some of the young guys performed in the preseason opener... 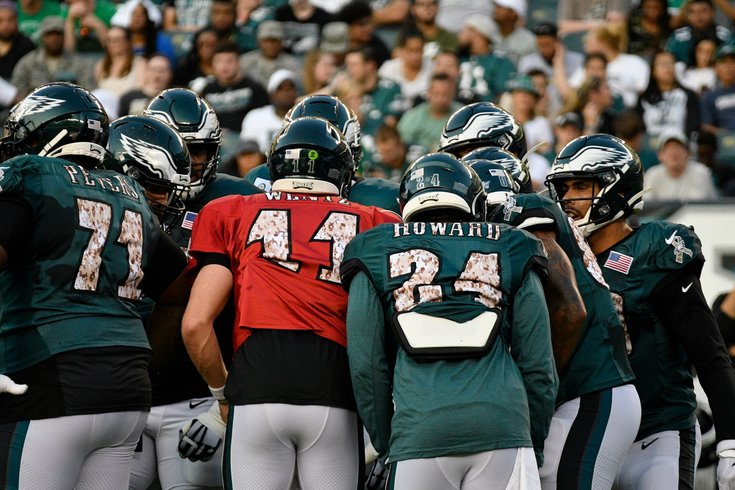 The Eagles offense huddles up during the team's open practice at Lincoln Financial Field.

The Eagles returned to the practice field on Saturday for the first time following their preseason opening loss to the Titans on Thursday night. And, from injuries suffered by Nate Sudfeld — as well as Lane Johnson and Dallas Goedert — to the play of the team's remaining backup quarterbacks, there was quite a bit to discuss.

But, as we do from time to time here at PhillyVoice, let's take a step back and look at what some of the other writers and analysts out there are currently saying about the Birds...

There's been a lot of talk this offseason about how deadly the Eagles offense can be. They're among the most-talented offensive teams in the league, with their only weakness at running back, but even that could be a strength by the end of the season depending on how rookie Miles Sanders develops — and playing behind arguably the best offensive line in the NFL can only help his cause.

But apparently not every analyst out there agrees with this assessment, as NFL.com's Adam Schein ranked the Eagles as just the eight-best offense in the league. While that still puts them squarely in the top 10, it's a much lower ranking than they've received elsewhere.

And, yes, these rankings are meaningless, but it's still strange to see them outside the top five. Any guesses who the seven teams ahead of them are? [The answer is below. Bonus points if you can get them all right.]

Here's a look at what Schein had to say about the Birds...

Carson Wentz is healthy and he's going to get back to the MVP form we saw before he ripped up his knee two Decembers ago. GM Howie Roseman has given Wentz the most talent he's ever had around him. DeSean Jackson is going to fly and perfectly complement big-bodied playmaker Alshon Jeffery. The tight end duo of Zach Ertz and Dallas Goedert is highly versatile and devastatingly effective. And I expect second-round pick J.J. Arcega-Whiteside to provide immediate returns as a jump-ball specialist. In the backfield, rookie Miles Sanders is going to star, with Jordan Howard leading a capable cavalcade of additional options at RB.

The offensive line should, once again, be among the NFL's best. Even if LT Jason Peters begins to show signs of aging at 37, Philly scooped up Andre Dillard as the ultimate insurance (and future blind-side starter) in Round 1. I love this offense.  [nfl.com]

Age is just a number, right?

Over at ESPN+, Scott Spratt ranked all 32 NFL teams based on their under-25 talent. And let's just say the Eagles didn't do too well, finishing dead last.

The Eagles haven't enjoyed the sustained success of the Patriots over the past two decades, but they land in the No. 32 spot in the under-25 rankings for the same reason the Patriots land one spot earlier. The Eagles have accumulated one of the deepest and most talented rosters in football, but nearly all of that talent is over 25 years old. Carson Wentz remains one of the most appealing franchise quarterbacks in the game, but he aged out of the under-25 rankings last year. Every starter at wide receiver and defensive back is 26 or older. And perhaps the team's best unit, its offensive line, has an average age of 31 years old.

Things could easily change for the Eagles this time next year if their three picks from the top 60 of the 2019 draft -- offensive tackle Andre Dillard, running back Miles Sanders, and wide receiver JJ Arcega-Whiteside -- are productive. But the Eagles are clearly more interested in competing with what's left of their Super Bowl roster than entering a full rebuild. They only made two more picks in the 2019 draft, and they hope one of them -- quarterback Clayton Thorson -- never has to start for them.  [espn.com]

While many of the Eagles best players are veterans, that doesn't mean the Eagles are an "old team." Last season, following the final roster cuts, the Eagles ranked 11th in the NFL in average age. That's also a huge improvement from the previous three seasons, when they ranked in the mid-20s. It will be interesting to see where they rank coming out of this preseason.

As for Spratt's rankings, they also take into account the quality of those players under the age of 25, which is what hurt the Eagles the most. That being said, many of their best players are still in their mid-20s. And that point about the Eagles offensive line having an average age of 31 ... that number would drop to 28.4* next season when Andre Dillard ultimately replaces Jason Peters.

*This even accounts for all the players aging a year as well. If Dillard was to replace Peters this season, that number drops to 27.4.

Left tackle of the future

Speaking of Andre Dillard, Brad Gagnon of Bleacher Report offered up some grades for rookies making their NFL debuts, and he liked what he saw out of the Birds' first-round pick.

The Washington State product was drafted 22nd overall as a potential long-term replacement for 37-year-old superstar left tackle Jason Peters. But if he continues to perform the way he did against the Tennessee Titans in Philly's preseason opener, it'll be hard to keep him off the field.

Dillard was roundly lauded on Twitter for his performance—particularly his pass protection. The tape backed it up. He looked confident, strong and flat-out unbeatable...

Bleeding Green Nation's Ben Solak took an even closer look at Dillard and fellow tackle Jordan Mailata, and even though the latter didn't have his best showing in the preseason opener, he believes the Eagles' second-team tackles are as solid a combo you'll find anywhere in the NFL.

There is absolutely no ugly for a preseason game, which is a big deal. (Though Mailata did forget a snap count again, which isn’t great.) Again, the OT3 and 4 play the Eagles got on Thursday night against the Titans is some of the best second-team OT play you’re going to find at the NFL level — and these aren’t veterans. They are athletic young players who are in the best OT developmental environment (veterans + coaching + system) the league could concoct. The future is bright for Mallard.

The Eagles lost Nate Sudfeld for the next month and a half when the team's backup quarterback suffered a broken left wrist during the team's 27-10 loss to the Titans. Over at ESPN.com, Tim McManus took a closer look at what this means for the Eagles — and whether or not they'd make a move to bring in a quarterback from the outside to supplant Cody Kessler as the current backup (until Sudfeld is healthy).

With the news on Sudfeld being somewhat encouraging, it's likely not a move the Eagles would make, but one name that keeps coming up over and over again is Colin Kaepernick. While he clearly deserves a job in the NFL, it doesn't seem likely that the Eagles would be willing to go out and make that move, especially given the reported timetable for Sudfeld's recovery.

There are a couple of notable quarterbacks who are without a team, including Kaepernick (who hasn't played since 2016), and former Eagles starter Sam Bradford. Brock Osweiler, Josh Johnson and Josh McCown (retired) are also names worth considering.

Kaepernick even made a statement this week that he is continuing to pursue an NFL job.

If Sudfeld's recovery timeline ends up being longer than expected or there is another QB injury, the Eagles will be forced to take action. But the process of starting from scratch with a quarterback at this stage of the season and getting him up to speed in Pederson's system might not be worth it given the circumstances.  [espn.com]