What can new defensive end Eli Harold bring to the Eagles? 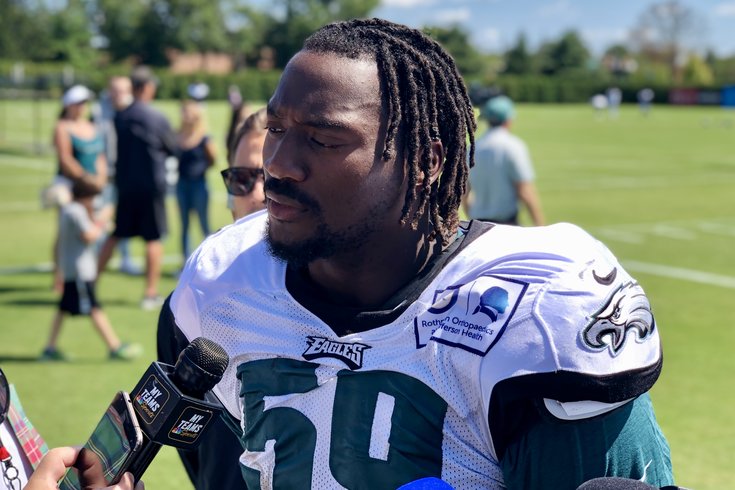 On Friday, the Eagles traded undrafted local prospect Ryan Bates to the Bills for defensive end Eli Harold, who was a third-round pick by the 49ers back in 2015. While Harold isn't likely to challenge the likes of Brandon Graham, Derek Barnett and Vinny Curry for playing time, he does have 61 games of NFL experience, including 25 starts over his four-year career.

"It feels amazing. First off, it's nice to feel wanted," said Harold, who is now with his fourth team in five years. "I'm excited about the opportunity. I can't wait to get to work with the guys and really learn and try to mold and build this thing the right way."

On Sunday, Harold, who said he is friends with safety Rodney McLeod and former DE Chris Long from college, got his first taste of life with the Eagles as he joined his new team in practice for the first time. After, defensive coordinator Jim Schwartz was asked to assess his newest pass rusher.

"Good body for what we are looking for," Schwartz said. "Our scouts had liked him a couple years ago. He has had a little bit of production. He played sort of a hybrid role last year for Detroit, but we are a little bit different. Put his hand in the ground and let him come.

"He’s big, he’s strong and we will add him to the mix and see where it turns out, but he does have a little bit of experience. It’s a little bit different than a rookie coming in. We should get him up to speed pretty quickly."

Given Harold's experience — and the fact that he has been already working with another team this summer — Schwartz expects the 25-year-old defensive end to be ready to go sooner rather than later, just like some of the team's other recent additions.

"The guys that come into camp late, particularly vets like that, it’s not as steep a learning curve," Schwartz said. "[Safety Johnathan] Cyprian, [DE Kasim] Edebali, Harold, it’s not as steep for those guys because they have a base of experience to play and it's more terminology.

"Younger guys like [CB] Ajene [Harris] that came in, it was much tougher for him because not only is he learning what to do, he’s learning how to do it. He had to go out there and play a preseason game on like two days practice, and I thought he did a nice job with that.

"Those guys are in a little bit different position. He has already been in a camp, been working, and is in shape, so we expect him to get up to speed pretty quick.

The problem for Harold is that not only will he have to get up to speed on the Eagles' playbook and terminology, but he'll also have to get used to playing his "natural position" of defensive end again after spending the last few years at outside linebacker. And with the team already deep into training camp, he won't have a ton of time to prove his worth to his new team.

"I'm just going to take it one day at a time and attack it," Harold said. "You know, give it all I got and just try to be me every day. Whether it's enough time or not, I'm just going to do what I do and try to impress the best way I can and control what I can control — and that's just to go all out every time I'm on the field."

At 6-foot-3, 255 pounds, Harold isn't the biggest edge rusher in the world — and he's played mostly outside 3-4 linebacker since being drafted out of Virginia — but Schwartz still thinks he can fit as a defensive end in the Eagles 4-3 scheme. And so does Harold, even though he agrees that scheme plays a big role in whether or not a guy will be successful with his new team.

"I think it plays a big part," he said. "Obviously, early in my career I was a 3-4 outside linebacker, then a 4-3 outside backer. I haven't really played defensive end since college. So I'm just getting back to being used to having my hand in the dirt and learning all the nuances of playing defensive end, because like I said, it's my first time playing it in the NFL.

"But I think scheme plays a big part into a player's success."

So shouldn't Harold be worried about transitioning to entirely different position in a new scheme? Not so fast.

Maybe those other teams he's played for — specifically San Francisco and Detroit — ran schemes that didn't allow a player like Harold to thrive. Maybe he's better just pinning his ears back and going after the quarterback. Maybe playing for Schwartz is exactly what he needed.

After all, the position he'll be playing is the same one that resulted in him being picked in the third round of the draft.

"I love it man," he said of returning to defensive end. "That's my natural position. Not matter what, going forward is always better than dropping into coverage a lot."

Suddenly, Harold finds himself not only playing the position he loves, but, after failing to win more than six games in a season through his first four years, also playing for a team that has Super Bowl aspirations. In fact, his previous teams averaged just 4.75 wins per season.

Clearly, playing with four teams in his first five seasons — and never even coming close to experiencing a winning season — is not what he envisioned for himself when he was drafted.

"You just take it," Harold said. "Like I said, you just control what you can control, because at the end of the day, it can be your last play every time you step on the field. The way I look at it is, I want to be remembered in a certain way, so I let my play do the talking and do everything I can do to better myself to try to help the team I'm currently on win."

Either way, you won't have to wait long to see what Harold can bring to the table. We'll get our first look at Harold in live game action for the Eagles on Thursday night when they visit old friend Nick Foles and the Jaguars for their second preseason game of the year.