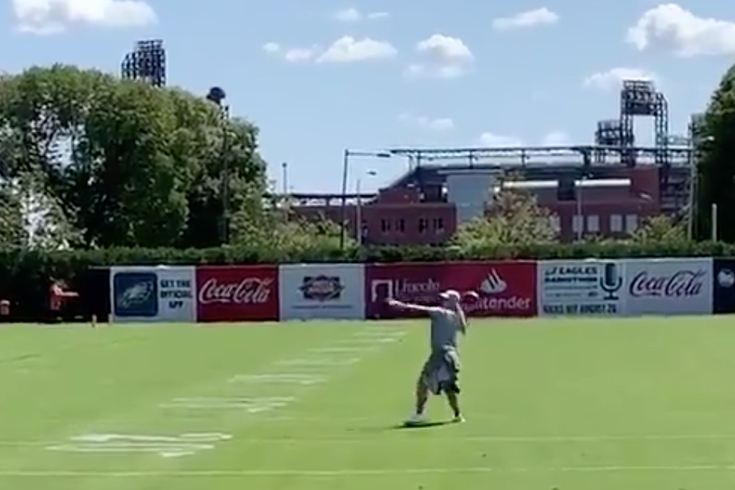 On Sunday, Zach Ertz and the Eagles spent a beautiful morning in South Philly practicing, and Julie Ertz decided to stop by to check out how the other footballer in the family plays football.

With access to training camp fairly limited these days, we don't blame her.

Julie Ertz stops by to visit Zach at work. pic.twitter.com/2Q0nHseKHw

After chatting and generally being a normal celebrity couple for a little bit, the Ertzes (Ertzii? Ertzen?) decided to toss a football-style football around. Unsurprisingly, even though Julie Ertz plays the other kind of football, she's also good at this kind of football.

Julie Ertz can spin it. pic.twitter.com/N3fouRGNNg

With the Eagles losing backup quarterback Nate Sudfeld for roughly six weeks because of a broken wrist, plenty of Eagles fans jumped to make the obvious joke: hey, Howie, how about signing Julie Ertz as the team's fourth QB?

The Eagles, though, have made it clear they're not really worried about needing more quarterbacks because Sudfeld's injury seems minor. And Julie Ertz will be busy in late August, anyway, as she and the rest of the USWNT celebrate the team's second straight World Cup title with a victory tour friendly match against Portugal at the Linc.

She reminded Eagles fans about the game via the Eagles' Twitter account, while wearing what appears to be a sick gray Birds baseball jersey: