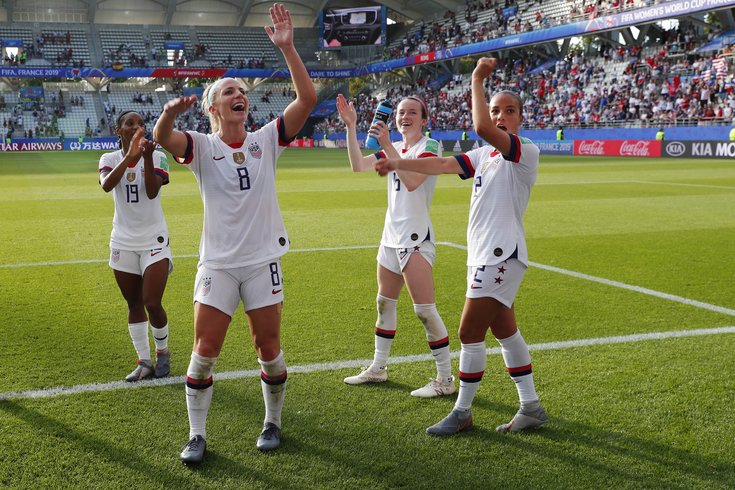 Julie Ertz (foreground) and the U.S. Women's National Team is visiting Lincoln Financial Field next month as part of the team's World Cup victory tour. The U.S. will face Portugal in a friendly.

U.S. Soccer announced the dates and matches for the team's victory tour on Wednesday afternoon. The five-game slate begins against the Republic of Ireland at the Rose Bowl in California in early August.

The USWNT will play at the Linc at at 7 p.m. on Aug. 29  against Portugal in a friendly in the first of two matches against the European side, according to U.S. Soccer.

From there, Megan Rapinoe and the USWNT will head to Minnesota on Sept. 3 for another matchup against Portugal. The opponents and locations for the final two matches of the tour have yet to be announced, but will take place during the first week of October.

While Philadelphia – and, frankly, everyone – may have fallen in love with the championship-caliber relationship between USWNT member Julie Ertz and Eagles tight end Zach Ertz over the past two years, there will unfortunately only be one Ertz in the house for the match. The Eagles face the Jets in their fourth and final preseason game that evening, at MetLife Stadium in New Jersey.

Still, Philly's soccer fans will be able to cheer for Rapinoe, Ertz, New Jersey natives Carli Lloyd and Tobin Heath, and the rest of the team before the city's main football season starts. As always, it's a good time to be a sports fan in Philadelphia.