Billboard on I-95 South welcomes Outkast's André 3000 to Philly 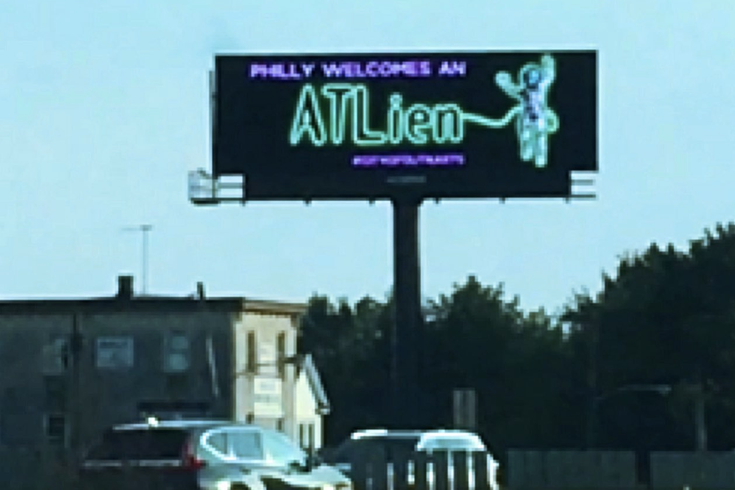 A billboard welcoming Outkast's André 3000 to Philadelphia is up on I-95 South heading toward Wilmington. The rapper and actor will be in Philadelphia to film for the upcoming AMC anthology series "Dispatches From Elsewhere," directed by Jason Segel.

One of the most unexpected bits of Philadelphia news this summer was the appearance of Outkast's André 3000 roaming around the city playing a double flute.

The hip-hop star and Atlanta native had previously been spotted with his flute in Los Angeles and New York City, places that are much more accustomed to celebrity sightings. In Philly, André 3000 showing up and taking photos with fans was a rare treat.

andre 3000 just walked into my job playing the flute

The Legend of 3 Stacks and the Flute Continues:

So I read this story a few weeks ago about Andre 3000 walking around places playing a flute.

I’m walking out of Whole Foods and there is a man walking in from 96 degree weather, playing a flute. pic.twitter.com/4TA7bP7inA

I heard that the legend Andre 3000 was walking around Philly playing the flute... and then I really saw him. pic.twitter.com/TzpbNmGbbj

If you live in Philly there's a good chance you'll see André 3000 walking around playing a double Flute. 👀https://t.co/FEzeEaqVgH pic.twitter.com/s74bBxAOea

One Philadelphia creative agency was so enamored with André 3000's visit to Philly that they decided to put up a billboard on I-95 South toward Wilmington.

Philly has always been a #cityofoutkasts but now that Andre3000 is popping up to play his flute all over town it’s official. We are doing something special to help welcome him and here’s a sneak preview of the work in progress. In Philly - the street is our theater. pic.twitter.com/qRY7bVvG9z

What’s this? On 95S headed from #Philly to Wilmington you can see our greeting to an out-of-Towner who’s been popping up to perform on the street while in town shooting a TV show. Let me know the next time you see Andre3000 I gotta rap with him about something.#cityofoutkasts pic.twitter.com/jAbgmELdOH

The billboard was designed by Philly Made Creative, a B2B marketing agency founded by husband and wife duo Matt and Kristen Berman. Atlanta natives often identify themselves as ATLiens, which is the name of Outkast's second studio album.

"We're running this campaign to highlight the beauty and organic nature of creative collaboration in Philadelphia," Matt said. "There is something magical about this city that people on the outside are finally starting to recognize. While we still have a 'no one likes us we don't care' attitude as a whole, I think we're starting to refine our message to the outside world — collectively."

André 3000 showing up here in the way he did is a perfect example of this, Berman believes.

"The street is a form of theater here like it is in many cities. André 3000 playing his flute for Philadelphians (at first anonymously) is evidence of that for sure. It's as if one Outkast recognized a city full of people like himself," Berman said, employing a bit of word play using the rapper's name. "Maybe he hasn't had that in a while."

Kegerreis, the billboard vendor Philly Made Creative partners with, had never heard of André 3000 before they agreed to the idea.

"Somehow or another they said, yes, despite nobody at their company being familiar with André 3000, Outkast, or the fact that he was in Philadelphia!" Berman said. "Usually I'm very measured, but with this we're kind of throwing caution to the wind. Figured it was about time to unleash our creativity with some more reckless abandon."

The billboard will serve an extended purpose. It was revealed last week that André 3000 will be starring in the AMC anthology series "Dispatches from Elsewhere," which is filming in Philadelphia late this summer and into the fall under the direction of Jason Segel.

If you pass the billboard on I-95 South, now you'll know what it's about. As for André 3000, we hope this makes him feel at home here in the months ahead.