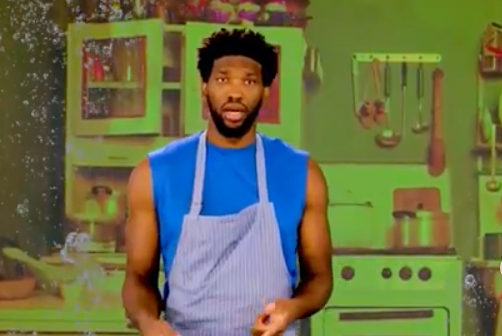 Sixers' Joel Embiid loves Shirley Temples, and in a new sponsored video post to his Instagram, the NBA center shows off how to make his signature mocktail.

Joel Embiid loves Shirley Temples. He loves the fizzy cherry drink like Julia Child loves French food — and before you tell me that's crazy, you should probably watch his first episode of "The Joel Embiid Shirley Temple Making Show."

The Sixers center partnered with Mountain Dew Ice to bring fans something we didn't even know we needed — a Shirley Temple how-to with the player himself.

There's a long history between the Sixers player and his love for Shirley Temples. Beginning in college at the University of Kansas, the player once claimed to drink two to three pitchers of the soda mocktail a day. (He has reportedly cut back since then.)

So, uh, what exactly is the perfect Embiid Shirley Temple? You start with pretty much the whole bottle of grenadine, because he likes it "extra extra extra sweet." He then pours about half a bottle of Mountain Dew Ice — because you can't have more soda than cherry syrup. The reason isn't explained, but I'm going to assume too much soda will take away from the delicate cherry flavor profile. Lastly, he adds the cherries — 12 of the them — because, "you can't forget about the cherries."

You can watch the full video below.

Cannot and do not forget about the cherries!! Catch the first (and probably only) episode of The @JoelEmbiid Shirley Temple Making Show. 😂😂😂 #MTNDEWICE