Carson Wentz lands on back end of 'NFL Top 100' list 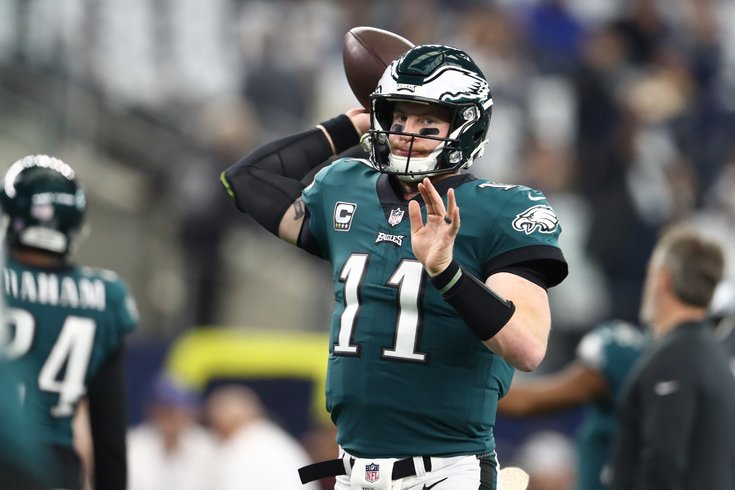 That yearly 'NFL Top 100' series began this week on NFL Network, and right off the bat, a Philadelphia Eagles player landed on the list. That would be Carson Wentz, and it's semi-interesting how low he appears.

The players voted Wentz as the 96th best player in the NFL, down from No. 3 last offseason. The "eye test" clearly showed that Wentz wasn't the same guy on the field last season as he was in 2017. Obviously, he was still recovering from a torn ACL and LCL when the season began, and adding a broken bone in his back on top of that certainly didn't help. Yet, Wentz's numbers weren't really down much in 2018 vs. 2017:

Here's the video the NFL put together of Wentz:

To note, it's not like the players take this list all that seriously. We (the media) are there when the NFL sends some people in to hand out ballots to the players near the tail end of the season, which (I believe) consist of 10 blank spaces where each player can fill in their top 10. Let's just say that they don't exactly agonize over their selections. My assumption is that the same happens in every other locker room league-wide. Maybe it's mildly interesting that more of Wentz's own teammates didn't vote for him? Or not? I don't know.

Anyway, Madden has Wentz rated as the 13th best quarterback in the NFL. Another national outlet (CBS, I think? Who cares, really) had him in the 70's or 80's. I'm not even googling it. And now the players themselves have him at 96th overall, surely with some quarterbacks ahead of him who couldn't hold his jock.

My #analysis: They're sleeping.