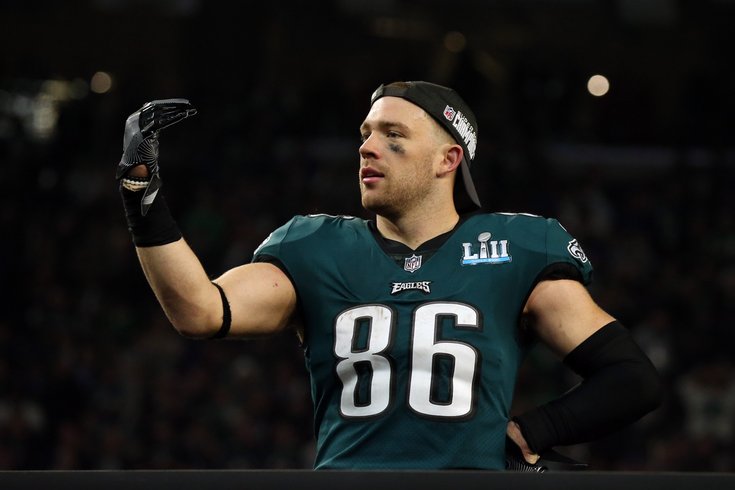 Zach Ertz likes to score and he likes to celebrate, so he had no problem with the U.S. Women's National Team scoring (and celebrating) 13 goals against Thailand in the Women's World Cup.

Zach Ertz was a crucial piece in the Eagles' Super Bowl run in 2017, a season which saw the team lead the league in passing touchdowns. The team pulled off a number of choreographed celebrations in the end zone that year, so he has some relative expertise on the subject.

Did Ertz, whose wife Julie Ertz plays for the U.S. Women's National Soccer Team, have any thoughts on the way the USWNT eviscerated Thailand, 13-0, in the team's Women's World Cup opener?

"I've got a lot of thoughts on that," Ertz said at his locker Wednesday, a day after Eagles coach Doug Pederson let him go home early, throw on a pair of blue-and-white star-dappled shorts, and root for his wife from across the ocean.

Ertz came prepared for the question, after the USWNT received some unnecessary, hand-wringing blowback from the internet for maybe going a bit too far in their dominance — and the subsequent celebrating. "Act like you've been there before" was a common refrain directed at the defending champions.

Unsurprisingly, Ertz didn't care for that line of reasoning.

Good first point. The women are in France to win games and win a championship, not spare feelings. Imagine sports fans telling the Golden State Warriors to ease up when they're leading a team like the Phoenix Suns by 40. It's almost like there's another factor at play here.

"Second, the best way to build team chemistry, and I think you guys saw that a couple years ago with us, was the way we celebrate with one another," Ertz continued. "When you're executing like that, executing at a high level, the whole team gets excited, the whole team gets involved, and it's really the best way to build chemistry, because you see people so happy for another person's success."

So proud of @julieertz and the entire @USWNT for yesterday’s INSANE victory over Thailand... biggest win in World Cup history! 🇺🇸

Today’s your last chance to play against me on @fanduel before I head to France. Think you can beat me? Prove it: https://t.co/0JtM06senF #sponsored

"I think you saw that with the entire team going out there yesterday, celebrating each and every person's success. It'd been building for so long. These girls have been training four years for another World Cup. For a lot of them, this is their first time. So to see how involved and excited each and every girl — I mean, you see my wife, she got subbed off, as excited as everyone out there, celebrating. I thought that's the best way to build team chemistry, camaraderie, and I thought it was special to celebrate like that. I didn't think it was a negative thing."

Personally, it's impossible to disagree with Ertz here. The World Cup happens once every four years. If you're not going to give your all for 90 minutes in such a rarified event, what are you even doing there? The USWNT is the best international women's soccer team in the world, and they showed that on Wednesday. If you don't like it, don't let them score 13 goals.

The USWNT play again Sunday, when they face off against Chile at 12 p.m.