Harper powered the Phillies to a 9-6 lead on Friday, and got into it a bit with San Francisco's crowd 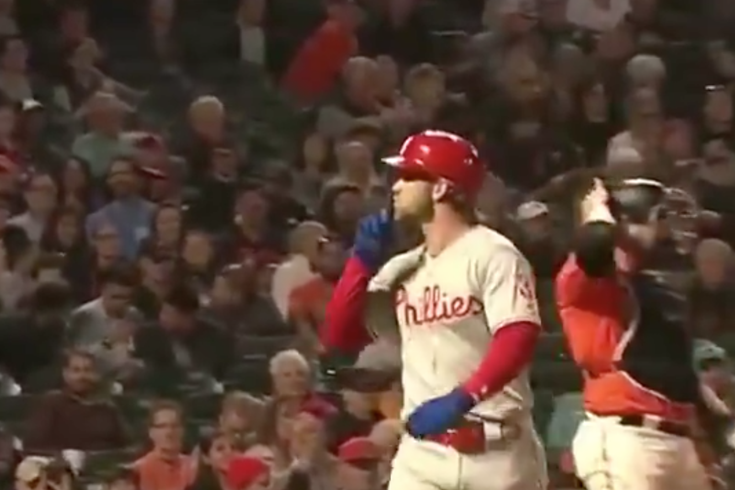 Bryce Harper shushes San Francisco Giants fans after hitting his first of two home runs against the Giants on Aug. 9.

Bryce Harper hears plenty of taunts from opposing fans, even when things aren't terribly personal. He's just the kind of athlete who has a uniquely bright spotlight.

During the Phillies' series in San Francisco this week, Harper's heard plenty of noise from Giants fans, and it seems Friday night he decided to lean into the fans' narrative and play the villain role, if only for a few seconds.

With the Phillies trailing, 6-5, in the top of the seventh inning, Harper smacked a booming 456-foot, three-run homer to right field to give the Phils the runs they would need to win the game, 9-6. It was Harper's second home run of the evening, and came on the heels of some pointed "overrated" chants from the crowd:

The first home run, though, was Harper's masterpiece. After he rounded the bases, he turned to the Giants fans as he crossed home plate and gave them the universal "shush" sign. You can see it at the very end of this video:

Very Max Talbot-esque. And, really, when you hit the baseball the way Harper does, you're allowed to shush the opposing crowd. I think those are the rules.

Harper after the game explained the dynamic of his back-and-forth with Giants fans, which sounds like it may have tiptoed, if not necessarily crossed, the line:

Bryce Harper on the boos from Giants fans and shushing them after his homer: pic.twitter.com/kMs1k3UFSz

Whatever was said, it doesn't matter now. The teams finish their series this weekend, and then the Phillies return home, where they need to start stringing wins together if they want to reach the postseason. More Harper homers will probably help the cause.