Mailbag: Why are the Eagles seemingly content with their quarterback situation, as is? 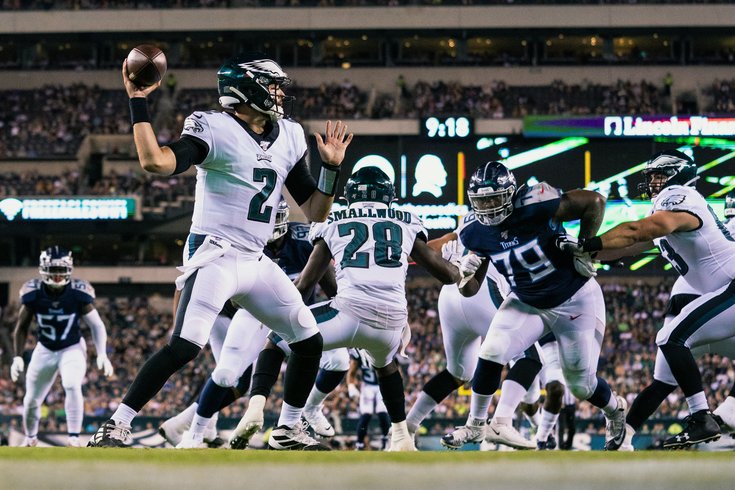 In our Eagles chat on Friday there were a lot of questions that we could not get to in time or other questions we did answer but could use more color. And so, let's do a mailbag post to answer some of the overflow.

Question from cormeagles: Colonel James, what harm would it be to bring in someone like Brock Lobster or Matt Cassel? There is simply no way Clayton Thorson is ready for the NFL now, if ever. You need a plan for a Week 1 Cody Kessler injury, or maybe one of these guys even looks better. It's not like either would take a valuable spot on the 90.

OK, so there's a lot to answer here:

• First, on Thorson: Carson Wentz, Nate Sudfeld, Kessler are making the team, barring any further roster moves at quarterback. Therefore, Thorson isn't making the 53-man roster unless the Eagles keep four quarterbacks. If he does, well, we'll cover the insanity of that at that time. But the thinking here is that he'll get released at 53-man cutdowns, he'll pass through waivers, and the Eagles will sign him to their practice squad. If Thorson gets claimed by another team, so be it.

• Signing another quarterback: If you sign another QB (and who knows what the cost of that would be), there's a good chance he is going to be a vested veteran, AKA a player with at least four accrued seasons under his belt. That's true of Brock Osweiler, Matt Cassel, Sam Bradford, Colin Kaepernick, etc etc. If you sign a guy like that and they make your initial 53-man roster, you have now bought them for the entire season, as their contract becomes guaranteed.

Kessler, who has three accrued seasons, is not a vested veteran, and can be released at any time without penalty on his non-guaranteed, one-year contract. In other words, if there comes a point when the Eagles once again have Wentz and a healthy Sudfeld and they need that extra roster spot, they can simply release Kessler.

• But shouldn't they just bring one in anyway to compete? Eh. Again, what would each quarterback be willing to sign for? But beyond that, Kessler has been learning the playbook since May, and it won't be easy, even for a veteran quarterback, to get up to speed on the scheme in time to prove themselves in a couple of preseason games.

Sudfeld is expected to return sometime around Week 3. Kessler is fine as the No. 2 for a very small handful of games in which it's unlikely he'll ever see the field anyway.

Question from Steve R.: Ideally, wouldn't a backup QB have a rocket arm for deep passes (as opposed to dink and dunk)? That way, you can at least gamble and take shots down the field to steal a win. If the defense adjusts and plays back, hit 'em with the running game (a less-skilled QBs best friend). Since Kessler is not strong-armed, this does not bode well for the Eagles.

I had this debate at practice with Brandon Gowton of BGN and Mike Kaye of NJ.com on Sunday. I kind of view it the other way.

The Eagles' Week 1 opponent is Washington. It's not like they'd be some kind of underdog in that matchup, and would need a rocket-armed dolt to throw up some prayers and steal a win. Doug Pederson has proven that he can scheme to quarterbacks' strengths, or at least minimize their glaring weaknesses.

But beyond that, the Eagles have one of the best rosters in the league. I think you allow a smart, but velocity-challenged quarterback like Kessler to manage the game, count on your stud OL to win up front, trust your talented skill players to make plays, and look for your defense to shut down Washington's trash offense.

Question from Keith: Do you agree with Brian Baldinger that Jordan Mailata was the best player on the field Thursday?

No, I don't. For anyone who doesn't know what Keith is referring to, here you go:

.@Eagles @jordan_mailata played 53/57 snaps last night and he was the #Birds best offensive player. Period! Not going crazy but if your are Howie & DougP I wanna see more. Give him every snap next week. It’s unreal what CoachStout is doing with this rugby star #BaldysBreakdowns pic.twitter.com/s1VxvhyPH4

I like Baldinger's enthusiasm, but he is the king of hyperbole. For example:

I think Benjamin Solak of BGN did a really good job breaking down Mailata's and Andre Dillard's performances in that game. It's a reasonable, balanced look at both players, showing the good and the bad.

Comment from 4th and 26: Not a question... just a point... Assuming our top two rushers are not Adams and Smallwood, The Eagles will have had 10 different rushers as their top 2 over the last 5 years. That’s pretty astounding.

Well, that's not really accurate, but it's close. Assuming Adams, Smallwood, or Darren Sproles are not in the top 2 in 2019, it would be eight different rushers as the top 2 over the last 4 years. Just for fun, let's go back to the final year of Shady and look at the Eagles' top 2 rushers each year:

Prediction: Miles Sanders leads the team in rushing this year, and assuming he stays healthy, each of the next three years as well.

Question from Ar-ttthhhhega Whiteside: That Giants rookie QB -- Future Hall of Famer after that preseason game, am I right?

In case any of you missed it, Daniel Jones looked pretty good in his preseason debut:

Actually, Dak Prescott looked very good in his preseason debut as well back in 2016, and then took home Rookie of the Year honors.

On the one hand, you don't want to make too much of a preseason performance, especially one in which Jones was able to stand in the pocket with all day to throw against whatever mess the Jets have on their second-team defensive line. On the other hand, let's be honest -- he threw some pretty nice passes.

If I'm the Giants, I'd start Jones, let him take his lumps on the field as a rookie, and prepare him to make a leap in Year 2. Why wait?