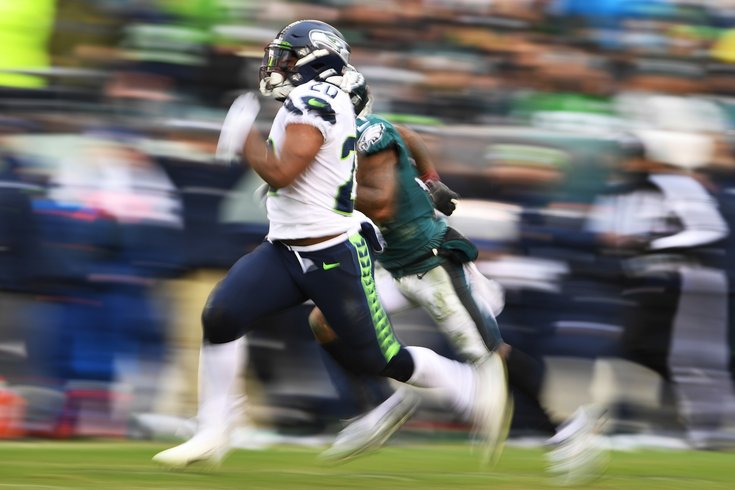 Seattle Seahawks running back Rashaad Penny (20) carries the ball for a 58 yard touchdown run in the fourth quarter against the Philadelphia Eagles at Lincoln Financial Field.

The Eagles have five games left to play this season, and it increasingly looks like their only chance at salvaging it rests in the hands of a higher power. Their offense is a nuclear waste dump and is going nowhere fast, as they showed once again in a 17-9 loss to the Seahawks on Sunday.

• I'll say this about Philadelphia's defense, they have continued to fight in the face of an impossible task. Propping up this horrendous Eagles offense has been a struggle, and in back-to-back weeks against opponents coming off of their bye week, they have risen to the occasion and kept games close.

Is this as simple as health making a difference? With Jalen Mills and Ronald Darby manning the corner spots plus Avonte Maddox getting back in the mix, the secondary has been miles more productive than they were during the opening stretch of the season. It was Darby who made the initial play on Philadelphia's first-ever interception of Wilson, and Rodney McLeod finished the play off for his teammate.

McLeod lateralling the ball during the subsequent return was tragic in a way as if the Eagles' defense knew the offense was hopeless and that they may need to score a touchdown in order for the team to have a chance.

There were solid contributions elsewhere on defense. Eagles fans have grown accustomed to Wilson picking up third down after third down with his legs against their team, but Malcolm Jenkins played a healthy amount of spy against him on Sunday, and it helped keep him in check.

Rashad Penny's touchdown in the fourth quarter was an obvious low point that put the game away for good, and Darby's miserable excuse for a tackle is what fans have grown to expect out of him. But that drive for Seattle felt like the cumulative effect of having to hold onto the rope for three-and-a-half quarters, given no room for error by a terrible unit on the other side of the ball.

(Devil's advocate here — had Seattle executed better on a couple of plays, they might have hung 30+ points on the Eagles. I'm not going to get mad at you if you think it was an overrated effort from the D.)

• Enough of the kid gloves with Carson Wentz. There are a lot of people (fans and media alike) who seem invested in giving him an unlimited leash because he had a great, albeit abridged season two years ago. On both sides of that magical season for the entire team, Wentz is what his record says he is — a quarterback capable of hitting extreme highs but mostly stuck in the middle, his best plays sandwiched by head-scratching mistakes. He was bad all the way through the end of the game, and you could argue his worst throw came after Seattle had backed off their coverage, giving him no excuse to turn the ball over against prevent-style looks.

If the Eagles' invested in him as if he were a game manager type player, it would be a different story. As much as we'd like to think everyone can be objective about how guys play at all times, preconceived expectations matter. And so Wentz is judged as a franchise quarterback, the sort of player who is supposed to be able to win in adverse circumstances and make his teammates better. That's not who he has been. Not anywhere even close lately, if we are being honest.

You would be correct to point out Wilson's collection of better weapons on offense, but watch how he goes about his business and you understand why there are levels of separation between him and Wentz. He has a knack for reading the right time to take risks, the right time to go underneath, the right time to tuck the ball and run for a first down on his own. That is what a franchise quarterback does.

And let's be clear — it wasn't even a good game for Wilson! But his guys left at least a couple of touchdowns on the field with drops. Every quarterback, whether they're at an MVP level or a bargain basement guy, has to overcome mistakes in order to win football games, whether they're his own or those of his teammates. When Wentz is talked about, though, it's often only through the prism of what someone else should have done to help him out, not what he could have done to make their job easier.

None of this is to say Wentz is irredeemable, or that the offense completely falling apart is all his fault. He has obviously hit soaring heights before. The playcalling has been abysmal, the personnel is bad, and there's no doubt he is pressing a bit as a result of the terrible circumstances around him. The Eagles must invest in talent to help him next offseason because one man can't do it by himself.

But he has not been good enough, end of discussion. It is past time for him to step up and lead by example. He is drowning instead.

• All that being said about Wentz, there should be as much concern about how poor and uninspired the gameplans have looked for Philadelphia on the coaching side. It is certainly not easy to go out there and scheme guys open when you don't have any receivers who can create separation, but there seems to be no understanding of the situation they are facing here.

When you have an offensive line that can't protect the quarterback in the pocket, you don't have him stand there and get flushed out time after time, you move the pocket and use his legs. When you have a passing game built on a collection of untalented and/or unproven wideouts, you don't try to throw your way to victory in a tight game, you run and try to win in the trenches where your offensive line actually showed some capability.

Why does it take so long to figure this stuff out for this staff? They constantly look like they are three steps behind the game playing out in front of them. You can't just give away the opening periods of games over and over again and expect to dig out of your self-created holes. NFL teams are too good for that. I mean seriously, some of this stuff is just common sense — why would you try to run tight end screens on the side of the line featuring multiple backups? Why are you running a shotgun draw play on third-and-one in Seattle territory?

Mike Groh and Doug Pederson are absolutely responsible for this team looking out of their depth week after week. Anytime they try to get creative, they look like a slapstick comedy routine, running into each other, mis-communicating on routes, or otherwise just falling apart at the line before we can even see the play develop. This offense sucks. It seems like Groh's dad fired him from a previous job for a reason.

• Drafting Dallas Goedert to be part of an elite tight end group with Zach Ertz seemed like a decent idea on paper. But these two are not the Patriots during the Gronkowski-Hernandez era (pre-murdering edition). Goedert has an argument as one of the most disappointing players of the season — he hasn't been great on volume, he hasn't been as dangerous in the red zone as some expected him to be, and he has made some awful mistakes over the course of the season, including a fumble in the fourth quarter on Sunday.

• Not great that Andre Dillard was so bad he had to get benched for the second half of this game, though ultimately it was the right call from the coaching staff. He's not going to learn anything from getting his ass kicked for four straight quarters, and the Eagles definitely weren't going to benefit from putting him out there anymore on Sunday.

• I know I mentioned it up top, but this tackle attempt from Darby deserves a section by itself. Look at this nonsense:

• As if Wentz needed another issue to deal with heading into the home stretch, he appeared to injure his hand when trying to make up for a fumble in the third quarter. Just what the Eagles' offense needs, more health concerns.

• Gentlemen, I understand and advocate for having fun when you're playing sports. When you're down 17-3 in the fourth quarter, though, it may not be the best time to bust out the group celebrations in the end zone. Restraint is not the worst thing in the world.