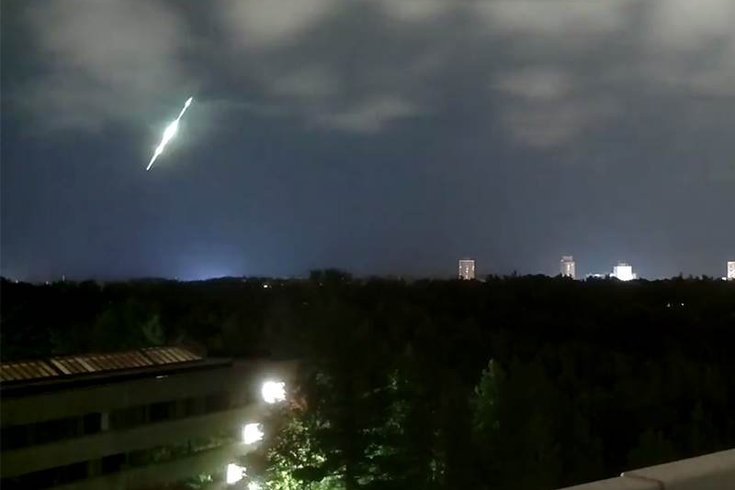 A time-lapse video caught the fireball streaking across the sky. According to social media, it was seen in the Northeast and in some mid-Atlantic states, including Pennsylvania and New Jersey.

A meteor lit up skies in the Northeast and mid-Atlantic at about 10:40 p.m. Tuesday, according to reports on social media.

Its huge red tail was spotted by people in Philadelphia, the northwest suburbs and in South Jersey, Central Pennsylvania and as far south as Virginia, social media posts indicated.

A camera at the University of Toronto Scarborough Observatory captured the fireball on video. It released a time-lapse video on Twitter.

A timelapse showing the view from #UTSC during the last 40 minutes. pic.twitter.com/9gDPnlDwsD

In Toronto, police and fire services received multiple calls about a plane crashing into the Toronto Harbor, TheStar.com of Toronto reported:

The confusion began just after 11 p.m. as reports of the plane crash circulated on Twitter, but Jason Rimmer, marine controller at the Joint Rescue Coordination Centre at the Canadian Forces base Trenton, confirmed that the incident was part of a meteor shower.

In a comment thread on Reddit, user Governor Elect of NJ wrote: "I'm in South Jersey and I saw it. It was gigantic. I was wondering how far people could see it. I've been trying to figure out what it was."

Bright fireball, probably a meteor was visible across WNY, PA, as far east as NJ around 10:35 pm last night. pic.twitter.com/5M6XqrcbVL

And kierzandax noticed it, too: "Saw it while driving home on the AC Expressway. Awesome sight."

The meteor was likely an Orionid, which can be glimpsed through about Nov. 7, as Earth passes through debris left behind by Halley's Comet, "the parent comet of the Orionid shower," according to EarthSky.org.

The Orionids will peak before the sun comes up on Oct. 21, albeit with a waning gibbous moon in the night sky, the website said.

Dr. Derrick Pitts, chief astronomer at The Franklin Institute, told PhillyVoice he could not say whether the meteor spotted Tuesday night was, in fact, from the Orionid meteor shower, as he didn't personally see it.

If it was, however, Pitts said those who witnessed it would have actually been seeing a relatively small meteor shower compared to others such as the Perseids and the Geminids.

"These meteors are described as bright and quick; they seem to originate from the area just above the star Betelgeuse, the red giant star of Orion – hence the shower name, Orionids," Pitts said.

Unfortunately for stargazers, Tuesday night's show does not necessarily mean that more showers will be seen in the area.

"In fact, what was seen last night could’ve been a very bright sporadic meteor," Pitts said.