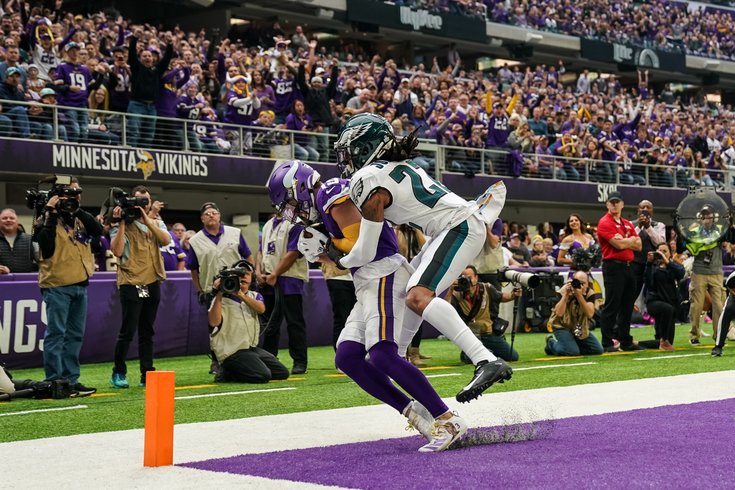 Thanks to an incompetent secondary and a whole lot of errors, the Vikings lead the Eagles 24-10 after 30 minutes of football.

• Jake Elliott is still good at kicking long field goals, and it appears the Eagles are going to need him to do a lot of that today.

• Is it a good thing that one of the team's best receivers has been a rookie running back who basically wasn't involved in the passing game as a college back? Maybe not. But with Miles Sanders struggling to get it going consistently as a runner, it has been comforting to see him building some chemistry with quarterback Carson Wentz.

This is right on the money from Wentz, who has hooked up with Sanders on a couple nice plays down the field over the past month.

The Eagles’ first TD of the game as Wentz finds Sanders up the seam pic.twitter.com/7YmcqvhCmy

Philadelphia is going to have to get Sanders more involved in the passing game, clearly, because they're struggling to get it going as a unit.

• If there's anybody left on Sidney Jones island, it might be time to start building a lifeboat or starting a fire to create smoke signals. The Vikings came out and clearly believed he was a weak link they could attack, and they were rewarded for their lack of faith in his coverage skills.

On Adam Thielen's opening touchdown, Jones was not really in a position to bother Thielen no matter what route he decided to run on that play. He was too far back to jam or bother him if the Vikings tried to go short over the middle, and Jones clearly didn't make use of the initial space he conceded him to defend the corner, because he somehow got beat over the top on an extremely short field.

The hits kept coming, with Stefon Diggs juking Jones out of his shoes on the very next series. When Jones gets opportunities to play, I feel like the guy in Office Space who looks across the desk at an employee and asks with clear condescension in his voice, "What is it you'd say you do here?" Coming off an injury or not, he has just not been good enough.

• As an aside, if Jalen Ramsey gets traded to another team this season, I think Eagles fans might turn the Novacare Complex to ash.

• Picking up penalties can be a natural product of playing aggressively, especially on defense. But those aren't the sort of penalties the Eagles have been picking up this season. Philadelphia's penalty style of choice has been of the head-scratching variety, with guys getting their hands caught in the cookie jar for no good reason.

Good teams, at least teams that want to contend, don't shoot themselves in the foot as much as the Eagles do, and they don't have the defensive talent to consistently make up for the free first downs they hand opponents. Whether they're holding calls, offsides penalties, or late hits, the Eagles have shown they are an undisciplined football team. That is hard to overcome when you play the league's better teams.

• Establishing the run and having a balanced attack is good. Here's what isn't good — throwing your first pass of the football game on the final play of the first quarter, already down 10 points on the road. Hard to win that way. In no universe should Wentz close a quarter 1/1 for a grand total of four yards.

• It is hard for an offense to inspire fear in an opponent without a guy who puts pressure on teams over the top. DeSean Jackson's injury has fundamentally changed what the Eagles' offense is capable of, and his absence has made it harder for the rest of their guys to impact the game.

Alshon Jeffery is great in the short to intermediate range, as is Zach Ertz, as is Dallas Goedert. But when teams know you're only going to attack one level of the field, they can minimize or even eliminate your ability to make big plays, and you have to nickel and dime them all the way down the field. The variety we've seen Doug Pederson use at times in the past is just not there this year, and I doubt it's because the Eagles want to make their offense more predictable and easier to stop.

They either need to hope Jackson gets healthy or potentially look for an outside solution here.

• I understand why Pederson didn't challenge the potential pass interference call on Nelson Agholor early in the second quarter. Officials have shown so far this season that you basically have to decapitate someone to overturn their initial ruling.

That doesn't mean I agree with that call. Even if you lose the challenge, it's the sort of high leverage/big value play those challenges are meant for. With the game slipping out of reach, I think you have to take the risk and let the chips fall where they may.

• The Eagles were close to making a game out of it late in the first half when Ertz let a potential first down go right through his hands. Wentz has not been perfect this year, but you can only absorb so many drops and missed opportunities as a unit.

• I'm going to go out on a limb and say the Eagles should think about retiring the kicker throw from the playbook.

• Jason Peters is one of the greatest Eagles of my lifetime and probably deserves to go into the Hall of Fame one day, and that doesn't make it any less frustrating when he's going in and out of the game with various nicks and bruises every week. Of course, you see exactly how valuable he is whenever he's forced to the sideline. First-round pick Andre Dillard immediately got bowled over when replacing Peters in the second quarter, and if not for a magical escape from Wentz, it may have pulled Philly out of field goal range.

On second thought, I'm not sure if that matters anyway, because this team is just getting worked on defense.