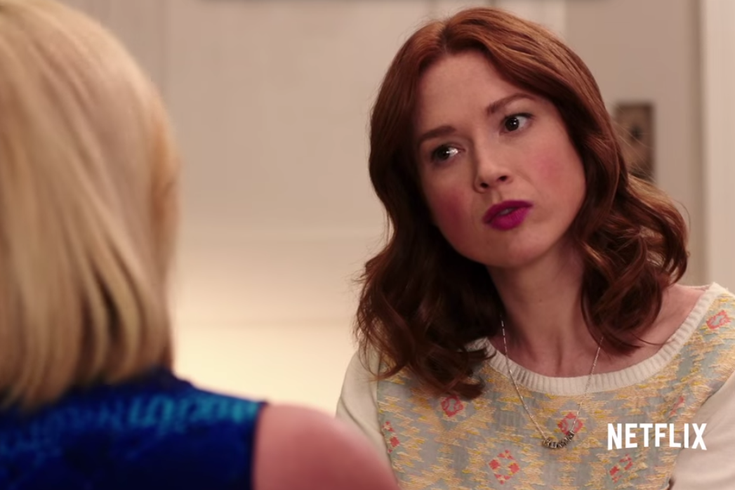 A scene from the Netflix-released trailer for 'The Unbreakable Kimmy Schmidt.'

So, this just might be the cheekiest thing Tina Fey's produced yet.

Netflix has released a two-minute trailer for its upcoming original comedy series, "The Unbreakable Kimmy Schmidt," written by Fey and Robert Carlock. After months of Fey droning on about the show, it's the first actual footage viewers have gotten a glimpse of. (And it looks promising.)

The show's premise is the standard fish-out-of-water variety, only with Fey's stamp of "Mean Girls" relentlessness. (You'll even notice there's a blond, "WASP-y" character who's essentially Regina George's mother in all but name.) Kimmy Schmidt, played by Ellie Kemper of "The Office," is one of a handful of Indiana women who lock themselves in a doomsday bunker, only to reappear 15 years later. Schmidt then decides to reboot her life in New York.

The concept's not something that necessarily needed to be on Netflix (the streaming service picked it up from NBC in November), but it does allow Fey certain creative freedoms, and in a recent interview, she specifically cited "Orange is the New Black" as a standard-setter for building buzz for a new show.

... ask if platforms like Netflix might offer a better home for smart TV comedy — Yahoo! will make new episodes of NBC's canceled Community soon — and Fey's not quite willing to go there yet.

See the trailer for the 13-episode "The Unbreakable Kimmy Schmidt" below, and mark your calendars for its March 6 debut.