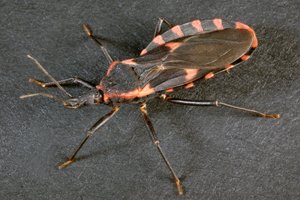 The "kissing bug" has been officially sighted in Kent County, Delaware.

The insect known as the "kissing bug" has made its way up the East Coast with a confirmed sighting in Delaware, according to the Center for Disease Control and Prevention.

The CDC confirmed earlier this month that a girl in Kent County, Delaware, was bitten by the insect on her face in July 2018. The child had been watching television in her bedroom in the late evening at the family's home located a heavily wooded area at the time. An air conditioning unit was also in the room.

Officials in Delaware identified the insect as Triatoma sanguisuga, or the "kissing bug," known for its blood-sucking bites on human faces near the mouth and sometimes as a carrier of the parasite that causes Chagas disease. The insect and disease are most common in Latin America and no cases have yet been reported in the U.S.

The CDC first warned residents in September that the insect was making its way north to the U.S.

According to the CDC, Chagas disease can cause serious cardiac and gastrointestinal complications. Although chances of contracting the disease are low, even if bitten, the disease can be fatal. Early symptoms include redness, swelling, hives and welts, diarrhea, body aches, and fatigue.

The Delaware girl who was bitten showed no symptoms of Chagas disease, and CDC officials say there is no evidence the disease is resent in Delaware.