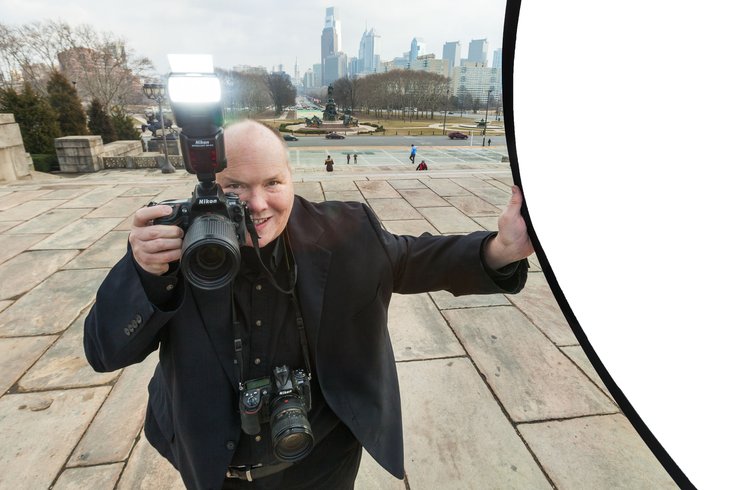 Event photographer and PhillyChitChat.com blogger, HughE Dillon on the steps of the Art Museum.

Generally speaking, photographers tend to steer clear of the spotlight. That's why HughE Dillon, Philadelphia's resident paparazzo, was a bit bashful when we reached out to learn more about the man behind the lens. Below, HughE Dillon shares with PhillyVoice.com his latest obsessions with music, people and more.

What song are you listening to on repeat right now?

“Who Says” by Selena Gomez. I just checked how many times I’ve played it this year, 390 times. It’s my anthem. I wish I had heard it before I photographed Selena with Justin at the Shops of Liberty Place a few years back, I would have told her how inspirational her simple song was to me.

What is the best meal you've in the last month?

The best meal I’ve had in the past month was at Palladino’s on East Passyunk. It’s the Casonsei. It has smoked ricotta and beets. There’s a sweet, savory, smoked flavor to the dish. I’ve had it twice and it’s soooo good.

What was the last movie you saw?

I can’t remember the last movie I saw, I really never have time to go to the movies. I am reading the Andy Warhol Diaries. Wish they'd make a movie of that book. In 1978, Liza Minnelli is sleeping with Mikhail Baryshnikov and Martin Scorsese at the same time as she's married to Jack Haley, Jr.

What are you binge watching?

I’m watching the Gilmore Girls. I'm out of control; I started last week and I’m in the middle of season two already.

Who is your favorite Philadelphian of the moment?

My favorite Philadelphian at this moment is Mayor Michael Nutter. Sure there's been some misses and a few missteps in his administration, but then there's also been a lot of progress. The City has really exploded with many development projects over the past few years, even during the recession. You might not realize this but the City is very involved in these projects, they woo companies, they create an atmosphere that is attractive luring businesses to the City and they're involved in the negotiations.

Right after Nutter finished shaking the last citizen’s hand on his inauguration night (remember he opened City Hall to the public that evening and greeted every citizen,) he got to work. He put a great administration team in place, he set an agenda to work on public safety, education, jobs and government integrity.  He set out to stop the “brain drain,” creating innovative partnerships with technology companies, putting incentives in place to help create an east coast “silicon valley,” partnering with programs like StartUp PHL. He’s been actively dedicated in the City's urban planning, for example Schuylkill Park, the Delaware Waterfront. Have you read his Greenworks plan? His programs to stem crime are a work in progress, and the murder rate has steadily declined in the past 7 years.  I think people will look back and say yes, he was a good mayor and the City moved forward.

You can find twenty of HughE Dillon’s favorite works on display at The Comcast Center on January 27th, from 5pm-7pm. Donations gathered at the door will go to the Linda Creed Breast Cancer Foundation.