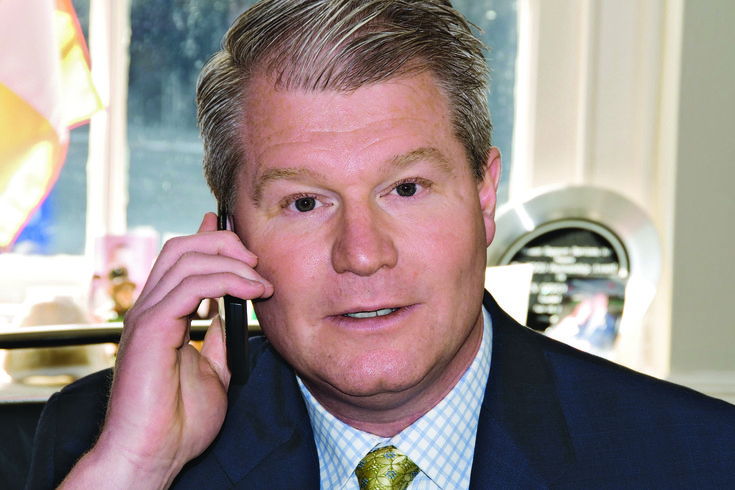 John Dougherty is the longtime business manager of the Local 98 of the International Brotherhood of Electrical Workers. To some, he's known as the politician who vied for former Pennsylvania State Sen. Vince Fumo's seat in 2008; to others, he's the vigorous union leader of 20-plus years who, last year, quarreled with the carpenters union (and crossed a picket line) at the Pennsylvania Convention Center; and to many more, he's just "Johnny Doc," the permanent fixture and personality in Philadelphia politics and society.

Here, a chat with Dougherty about days gone by, which non-electricians union he'd lead if given his pick and what his plan is as the new head of the Philadelphia Building and Construction Trades Council, which represents nearly 40 unions in Philadelphia and the suburbs.

What’s your favorite childhood memory of growing up in Philadelphia?

It’s a tie. No. 1: Summertimes spent playing in Reverend Burke Playground at Second and Jackson streets, playing Wiffle ball, stickball, basketball, pinochle and going under the fire plug -- all day, every day, all summer. No. 2: Every Saturday, getting dressed in my football equipment at 6 a.m., then going to the Edward O’Malley Association Clubhouse to play football for the 65-pound, 70-pound and 85-pound football leagues -- over a period of four years. Then, around 12 p.m., all 30 players would run from Fourth and Ritner streets to Fourth and Shunk streets -- EOM football field -- with our green and gold uniforms and freshly painted helmets to play a 1 p.m. game.

If you had the choice to be the head of any other union in the city, which would it be?

[Laughs] I've never ever even thought of this question! Probably the Philadelphia Teachers Union -- Philadelphia Federation of Teachers. I think I would enjoy the challenge of public education.

Rumor has it you’re a fan of the Jersey Shore. What shore town is your favorite and where could we spot you grabbing a bite to eat?

Somers Point at my mom and dad’s house and the Anchorage Inn – the people are nice, it has the coldest beer down the shore and the best onion rings I’ve ever had.

What is your favorite JibJab you have done thus far?

The first Christmas JibJab. Our holiday JibJabs seem to have surpassed the old Norelco commercial as the unofficial start of the holiday season. I always try to run the commercial during all the classic holiday shows, like "Rudolph," "Frosty" and "The Grinch."

One of the many holiday-themed JibJab commercials Dougherty has released as head of Local 98.

Bonus question: What is one unique thing you would like people to know about you?

I read a book every two weeks, I pray every day, and I’m currently learning to play the guitar as well as write music.