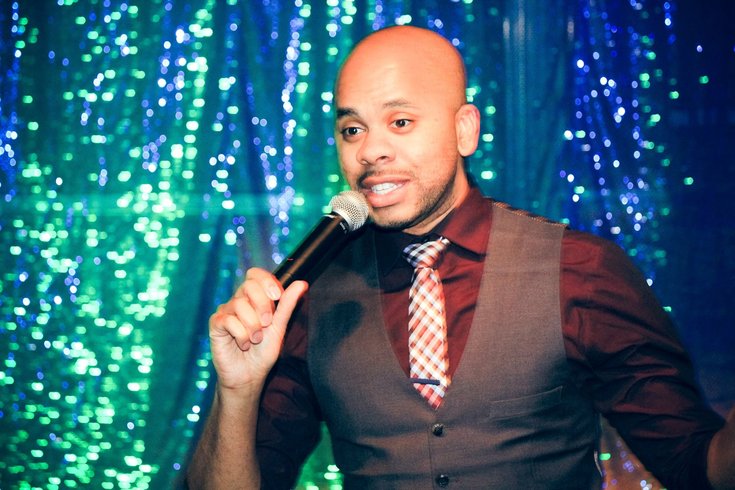 When he's not working his day job as venue services manager at Philadelphia Theatre Company or writing plays, he's cracking jokes and telling socially impactful stories at bars, clubs and events throughout the city. Thomas will appear June 24 at the Painted Bride to host open-mic storytelling competition "The Moth Story Slam," and will debut a (free) wordless puppet show called "Frieda, the Invisible Woman" at Reading Terminal Market on July 14.

Below, Thomas talks about what dramedic story he lives to tell, what celebrity's friend request he'd deny and what he's up to this weekend.

What 'dramedic' story do you love telling most?

I brought a boyfriend home for Thanksgiving one year, and it was the first time anyone in my family had met anyone I was dating, and I was a ball of rom-com-level neurotic energy. I love telling that story because it's a hilarious set of misadventures and family dramas that resolves in probably the loveliest moment that I've ever been able to create on stage. It was a surprise to me the first time I told the story and found myself completely bowled over by the way I felt telling it and the way the audience responded. It's probably a story I'll be telling for the rest of my life.

R. Eric Thomas's storytelling in action at the 2011 Tedx Philly.

Diplo. Because I'm not 100 percent sure who that is. I'm pretty sure it's a DJ, but it's also possible that that's the name of a Nickelodeon cartoon character. Either way, I'm not buying what they're selling. Also, if it's a DJ, I'm pretty sure that a Facebook friend request is just an invitation to be bombarded with event invitations to TIDAL launch parties or something.

What do you think is the meaning of life?

I think life is about being present. We think a lot about our pasts and our futures. (Or at least I do -- I don't know what you think about. Probably your taxes. Or what time your Mummers practice is. Or cats. I don't know your life.) Regardless, I think life takes on special meaning when we're able to look around at our present circumstances and appreciate being for the miracle that it is. The meaning of life is to live it, wholeheartedly.

What are you watching on TV right now?

I'm obsessed with "Scandal" and "Empire" because I basically am Black Twitter. If you are not watching "Empire," I don't even know what to do with you. I can't. I cannot. I am unable to can. Yes, I know it's a campy disaster. Yes, I know that they are constantly abandoning plotlines like errant tumble weave. I don't care! It is the guiltiest of guilty pleasures and Taraji P. Henson's performance is a master class in subtlety masked by outrageous. Give that woman the Pulitzer Prize.

What are you up to this weekend?

This weekend I'm really looking forward to a couple of SoLow Festival shows. I've got reservations for Jeremy Gable's tap dance show "The Idaho Shuffle" and I'm chomping at the bit to see "The Unfound Nudibranch," written by Lena Barnard and starring the incredible Kristen Norine. My friends Jaime and Nora are getting married at Old Swedes on Saturday; can't wait for that. And I'm going to try to find a time to drag my boyfriend to the movies by hook or by crook. "Spy," "Jurassic World" and "Inside Out" are all calling my name something fierce.