Five burning questions the Flyers must answer this offseason 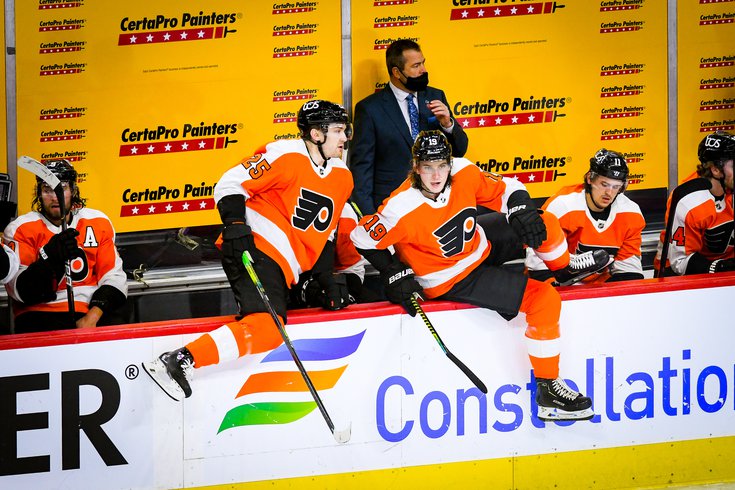 PHILADELPHIA, PA- JANUARY 13: James van Riemsdyk #25 and Nolan Patrick #19 of the Philadelphia Flyers hop off the bench during the game against the Pittsburgh Penguins on January 13, 2021 at the Wells Fargo Center in Philadelphia.

Not many fans foresaw that at the end of May, the only thing to talk about concerning the Philadelphia Flyers would be the team’s offseason plans. Yet with just a few days to go before June and the first round of the playoffs heating up, Flyers fans already are looking towards the summer.

This will be one of the biggest offseasons for the Flyers after one of, if not, the most disappointing seasons over the past few decades. With the Flyers now in offseason-mode, here are some of the biggest questions that General Manager Chuck Fletcher will have to answer as he searches for ways to get this organization back on the right track.

What to do with Nolan Patrick?

Since the Flyers' season ended, there has been plenty of rumblings about what the future holds for the former 2017 No. 2 overall pick. The reason Patrick has become such a polarizing player in the city has to do with the injuries he has faced in his young career, having just played in 197 of a possible 302 regular season contests.

The Winnipeg product did play in 52 of 56 games this season but only registered nine points. Much of his poor play this season was chalked up to him missing the entire season before and the lack of a normal offseason amid the pandemic. Aside from fans, no one in the organization ever publicly criticized Patrick for his lack of production with head coach Alain Vigneault pointing to his effort on many nights as a positive side.

At some point, though, a former top pick needs to do more than pick up a point or two every other week. Patrick simply hasn’t produced much — even prior to his bout of concussions — and didn’t show a ton of promise in his first season back. Patrick, who is on his third agent since joining the league, may be someone the team looks to move in a deal this offseason or leave exposed in the expansion draft with hopes of Seattle grabbing him off of their hands.

Who to protect in the expansion draft?

Speaking of the newest NHL franchise, one of the Flyers’ biggest decisions this offseason will involve who to protect and in turn, who to expose, when it’s time for the Seattle Kraken to select one player from each organization.

The 32nd hockey team will be responsible for selecting one player from every club except Las Vegas (who joined the league in 2017) with a roster that breaks down with 14 forwards, nine defensemen and three goalies. The latter won’t be a worry for the Flyers as Seattle won’t be plucking any goalies from them with Carter Hart being one of the players who Fletcher will protect.

The Flyers will be able to protect seven forwards, three defensemen and one goalie. Fletcher won’t have to worry about protecting any first or second year players, which includes Joel Farabee, Wade Allison, Cam York and Morgan Frost.

The most likely plan for the Flyers will see them use their three defensive protections on Ivan Provorov, Travis Sanheim and Phil Myers. Up front, expect Claude Giroux, Sean Couturier, Travis Konecny, Kevin Hayes and Scott Lauhgton to all be locks for designation. That leaves two spots for Jake Voracek, James van Riemsdyk and Oskar Lindblom, the latter being the youngest and someone the organization views highly. As a result, the Flyers will more than likely be losing one of their top scoring veteran forwards or someone like Shayne Gostisbehere (and his big contract) to the Kraken.

Where can a top pair defensemen be found?

Once the dust settles from the expansion draft, the Flyers will have to address their biggest concern: a top pair defenseman to go alongside Provorov. After Matt Niskanen abruptly retired last offseason, Fletcher turned in-house to answer this question and ultimately was burned pretty badly by Sanheim and Myers taking steps backwards this season. He likely won’t pencil in one of those two guys alongside Provorov to start next season and certainly won’t want to rush York, their top prospect, into being a de-facto top pair blueliner from the jump.

It’s pretty evident that Fletcher will and should go all-in to get a high-end blueliner to prevent another season like 2021. During the end-of-season interviews, Fletcher said they’ll need to get “creative” in order to improve this team. What that means remains to be seen, but it’ll more than likely involve bringing in a big-name defenseman or two.

Names that Flyers fans have already set their sights on include Dougie Hamilton, who fits the team’s biggest need even more so than others being a right-handed shot and one of the top point-producing defensemen. The biggest unrestricted free-agent will have an array of suitors bidding for his services, including his current team, Carolina, who many believe will step in with a big offer. David Savard, Adam Larsson and Brandon Montour are a few other names to keep an eye on come free agency.

This seems like a pretty silly question. Last season’s over, what’s it matter at this point?

Typically organizations close the book pretty quickly on the prior season, especially one that crashed and burned like it did for the Flyers, but 2021 was a season like no other. Fans don’t want to hear excuses and that’s totally understandable, yet Fletcher and Vigneault alluded to the different structure of last season and the impact it had on their younger guys, both in their development and everyday living.

There’s no way of knowing for sure how much life in the pandemic impacted the team on the ice, and it doesn’t excuse them from their sloppy play when every other team went through the same protocols. However, for someone like Fletcher who is evaluating what he has on the roster, factoring in things like how everything over the past year and a half impacted these young players who mainly all took steps backwards is something he has to do.

It would be unwise to burn it all down if he truly feels there was a noticeable impact on his team. It would also be poor decision-making if he sat on his hands and did nothing, believing that the team which won the top seed in the bubble just months prior to last season is somewhere in there. Fletcher has the difficult task of finding the middle ground in what to do this offseason to better this organization for the now and the future.

Is Alain Vigneault still the guy?

This has already been answered for the 2021-22 season. Fletcher confirmed with The Athletic’s Pierre LeBrun that Vigneault will be back for his third season after a rumor came out towards the end of the season that he may have considered stepping to the side. During his exit interview, the coach reiterated that he came to Philly “to win a Stanley Cup” and that he had told Fletcher “I sort of felt like I’ve let everyone down here.”

This season was surely one to forget and Vigneault often found himself in the crosshairs of angry fans looking for heads to roll. Rash decisions aside, Vigneault will be back for a third season but his job security is starting to heat up a bit. If the Flyers get out to a poor start over the first two months next season, that seat will only get hotter for the Canadian head man.

Fletcher is adamantly supportive of Vigneault, and the rest of his coaching staff for that matter, in being the right for this mix of guys. Yet, it would be keen to really look inside and figure out what exactly went wrong this offseason and how much of the young players’ backward slide was a result of COVID regulations and the coach’s messaging. If a decent percent of that is determined to be at the hands of the coaching staff, then Fletcher’s leash on Vigneault has to shorten a bit heading into the next season.