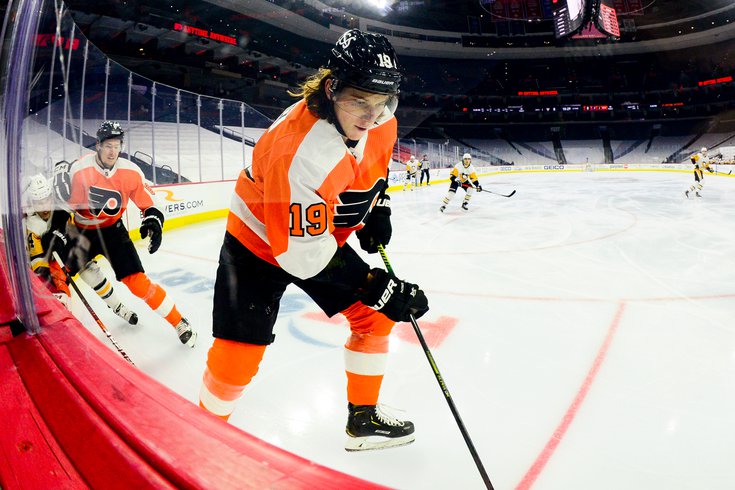 The Philadelphia Flyers were officially eliminated from playoff contention following last Thursday’s loss to the New Jersey Devils. In a season filled with major disappointment, the ending of this torturous season means it’s time to begin looking towards the offseason.

With any offseason comes the first thoughts of what the team will do in the draft. With the NFL just wrapping up its three-day draft extravaganza, and the hometown team making a huge splash with the Heisman-winning wide receiver DeVonta Smith, let’s take a look at some of the most notable NHL Entry-Level Draft selections, including the Flyers’ biggest hits and those heartbreaking misses over the last decade.

When it comes to the NHL draft, nailing a first round pick is up there with Major League Baseball in terms of its difficulty because of its global scouting and the numerous amateur leagues to go along with the college ranks. For the Flyers, the top picks between 2011 and 2012 were major hits.

One of those picks was the No. 8 pick in 2011, Sean Couturier. Simply put, the QMJHL product has blossomed into one of the best forwards in the league and was rewarded for his two-way play with his first Selke Trophy last season. This was a loaded draft class that featured Gabriel Landeskog, Mark Scheifele, Johnny Gaudreau and Ryan Nugent-Hollins ahead of Couturier, but the Flyers aren't regretting anything about how this played out.

They followed that up with Scott Laughton at No. 18 the following year, giving them another forward to build around for the next decade. Laughton also recently inked a five-year contract. The Flyers sweetened the pot that year with Shayne Gostisbehere in the third round, giving them three major impact players this past decade in back-to-back drafts.

What’s better than getting three cornerstone players like the team did between 2011 and 2012? How about getting three of them in their first four picks in 2014. That's exactly what the Flyers did when selection Travis Sanheim in the first round, Nicholas Aube-Kubel in the second and Oskar Lindblom in the fifth round. Sandwiched in there was Mark Friedman who now plays in Pittsburgh.

Lindblom in the fifth is a major win for the Flyers. He has 70 career points with the next closest guy in that round sitting at 43 (Anders Bjork). Sanheim and Aube-Kubel have had their struggles this season — honestly, who hasn't for the Flyers — but they both, especially Sanheim, figure to be building blocks for this organization moving forward.

A franchise goalie in the second

This may not have been his year, but Carter Hart is the future (and the now) of this Flyers team. The orange and Black were able to snag him in the second round, making him the first goalie selected in 2016.

How good of a pick was this for the team? Besides being the face of this team between the pipes, Hart is one of only three goalies from that class to make the NHL. The other two have a combined six games played compared to 101 for Hart. What a find by Ron Hextall.

This one has a chance to be among the best first rounds for any team ever if these two players become what many think they can. At No. 7, the Flyers snagged Ivan Provorov and followed that up with Travis Konecny at No. 24.

That's 708 career games combined in those two picks and two staples for this team. Provorov has become the team’s No. 1 defenseman with room still to grow, while Konecny has already had a season in which he led the team in scoring. Both players are just 24 years old and will be in Philadelphia for a long time.

An unlucky first round pick

At this point, Nolan Patrick hasn't panned out. An unfortunate injury really threw a wrench into his development and makes it tough to really make a decision one way or the other on his future, but even before the concussion, Patrick left much to desire.

The No. 2 overall pick in 2017 has 70 points in 191 career games. That's actually eighth among all players in that class, but what hurts the most here is that the top producer from that group, Elias Pettersson is nearly a point-per-game player with 153 points in 165 games. The Vancouver star was the next center taken at No. 5, as well.

There's optimism tha Patrick can turn things around but 2021 hasn't given much hope to that. The 22-year-old has just nine points in 46 games this season.

A swing and a miss

Sometimes your first round pick just doesn't pan out for whatever reason. In 2016, that was exactly the case with German Rubtsov at No. 22. A casual Flyers fan probably won’t even recognize this name, which says it all. The Flyers have fared well — for the most part — in their first round selections and the ones that have missed were in large part due to injuries.

With Rubtsov, injuries certainly have stalled him. He has appeared in just four games — all in the 2019-20 season — and registered no points. The Russian forward is currently loaned to his home country where he is playing in the KHL.

There were a pair of missteps here for the Flyers. The first was Samuel Morin at No. 11. While impressive on paper, Morin has yet to become anything but a depth player and more than likely won't ever be more than a 7th defenseman. Injuries and bad luck had a lot to do with that, though, but it does sting seeing the names who went after him. Max Domi went immediately next with other defensemen like Ryan Pulock and Josh Morrisey, both of whom have more than 280 games in the league versus Morin’s 27.

The bigger reach came in the third round that year when Tyrell Goulbourne was selected. Over the next nine picks, names like Pavek Buchnevic, Anthony Duclair, Jake Guentzel and Mattias Janmark were all grabbed. Anyone of those guys would be nice to have right now. Goulbourne, known more so for his physical play, registered 11 career NHL games with zero points.