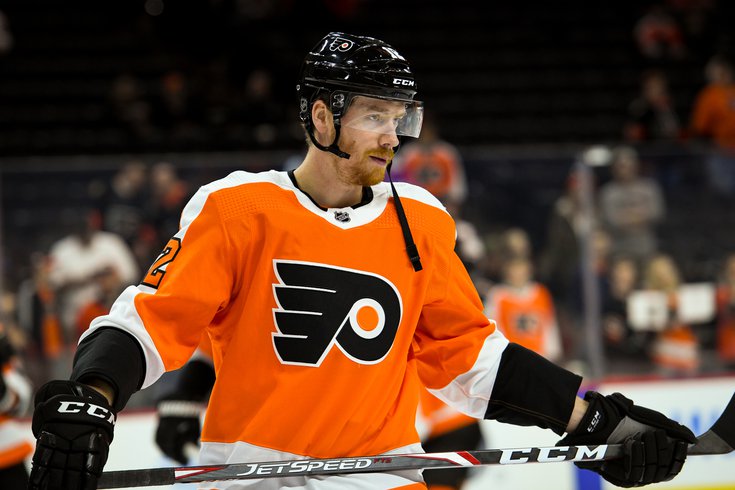 Michael Raffl skates during warmups before the Philadelphia Flyers game against the Vegas Golden Knights at the Wells Fargo Center in Philadelphia on October 21, 2019. (Kate Frese)

The Flyers made a trio of moves at the trade deadline Monday that, together, paint a picture of where GM Chuck Fletcher currently sees the Flyers' organization.

Sitting four games behind the Bruins for the final playoff spot in the East, Philly's activity did not do a ton to make them any less competitive for the playoff spot, but it did turn the page — at least in part — to the future as they look to re-group and make a game plan for 2021-22.

While I get your frustration, truly. To retain what Laughton gives you at a 3 Million AAV is a very good deal. Understand that The major surgery to this team was NOT going to happen on deadline day. Those types of moves are offseason deals and don't get done on trade deadline day https://t.co/mqCoHb5yDb

The team seemed on the fence up until Monday afternoon on how to handle Laughton, fielding offers for the former first round pick. But ultimately, at that price, having a middle-six forward under contract was a big enough draw for them to avoid free agency. They opted to keep him over what would have amounted to a late round pick for his services as a rental elsewhere.

The next move, finalized just before the deadline passed, was Fletcher and the front office somewhat impressively finding a way to get compensation for veteran winger Erik Gustafsson. He's played just 24 games and has been on the outs in a rotation of defensemen who have been playing pretty badly as a whole.

The Flyers received a seventh rounder for Gustafsson and will split his salary with the Canadians. His short tenure in Philadelphia will be a blip for the Flyers, who signed him this summer to help make up for the loss of Matt Nistaken. It did not work.

After 3 p.m., a late addition to the transaction wire trickled in and it happened to be the biggest move for the Flyers in a while.

Raffl has been a good depth guy in Philly for years, but it was time to move on. Opens up a spot in the lineup the rest of the way for Tanner Laczynski, for starters. Plus, it just didn't make much sense to re-sign him (he's a pending UFA). https://t.co/WmOGtGajOh

Philly agreed to trade 32-year-old Michael Raffl within the division to the Capitals in exchange for a fifth round pick. Raffl has been a staple in the city for years, having played more games (504) than even Eric Lindros did in orange and black over eight seasons. Five times in his career, he scored 20 or more points (all as a Flyer), but he has been lackluster in 2021, scoring just eight points in 34 games. His departure, along with that of Gustafsson, opens up two slots for youngsters to give the team the shot in the arm it so badly needs.

Perhaps the most telling part about the deadline strategy the Flyers showed was they did not move Nolan Patrick, a pending restricted free agent who has under-played his second overall pick designation. Nor did they trade away Shayne Gostisbehere, an offensive-minded forward who has upped his game amid trade rumors over the last few weeks.

It will be interesting to see what happens with Patrick moving forward, as this more or less assures they will stick with the 22-year-old and try to bring him along within the organization. And perhaps Ghost's being sent through waivers a few weeks ago was the wake up he needed to get back to playing like he did his first few seasons in Philly.

So the team was able to tactfully toe the line between punting completely and signaling surrender in 2021.  They also didn't turn a blind eye to the fact that they needed to do something to potentially save the season. They dealt with three pending free agents to give them more time to plan their attack for 2021-22.

Also, getting something is better than nothing.

We'll see if the subtle vote of confidence (they didn't have a firesafe) or the shock of trading away mainstay Raffl does anything to help change the performance and chemistry of the team with 15 games left this season and a whole lot still to play for.