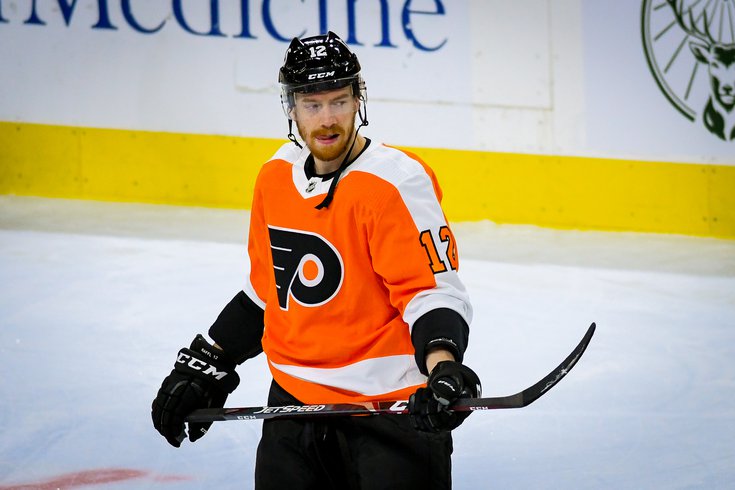 Monday is rapidly approaching, which means Philadelphia Flyers’ general manager Chuck Fletcher will have some major decisions to make before the NHL trade deadline. A month ago, many suspected the Flyers would be buyers at this point with their sights set on bringing in a veteran defenseman to solidify the defense heading into the postseason. That foresight has quickly flipped with the team now well on the outside looking in and assuming the role of sellers at the deadline.

From a glance, the Flyers don’t appear that far away from the fourth and final playoff spot in the East Division. So it would seem ill-advised to look towards next season already, but when it comes to chasing points in the NHL, it’s an uphill battle where time is against the Flyers. Not only are they chasing the Boston Bruins, the New York Rangers have really found their groove and are right there with the Flyers, putting a third team in the race.

Despite picking up a point in Thursday's 3-2 loss to the New York Islanders, the team actually lost a point in the standings with Boston knocking off Washington. That leaves the Flyers six points back with 17 games to go and with Boston having two games in hand. If Boston were to simply go one game above .500 the rest of the way, that would give them 68 points. To get to 69 points, the Flyers would need to hypothetically go 14-3 to get 28 more points — seems highly improbable.

With all that said, the Flyers really have no choice but to be sellers at the deadline due to a few factors:

Playoffs are a distant thought

It's crazy to look back at where this team was heading into March to where they sit now after the first week of April. The dramatic fall in the standings at the hands of a 7-11-2 stretch has dropped the Flyers from the upper echelon of the East Division to a slight step above the basement where only teams like New Jersey, who just shipped off two of their top players on Wednesday, and Buffalo reside.

In order for the Flyers to vault back into a playoff position, it would take quite the serious turn of events, one that doesn't seem at all likely considering the level of play exhibited by the team over the past five weeks.

Had the Flyers been in a playoff position, a spot they were in not that long ago, things would be different going into Monday. Now, though, it just doesn't make sense for Fletcher to buy a rental like Matias Ekholm or another goaltender such as Detroit's Jonathan Bernier in order to make a longshot run.

They have attractive expiring contracts

As Fletcher noted during his press conference in March, the trade market is impacted by the flat cap and the upcoming expansion draft in which the NHL's newest franchise, the Seattle Kraken, will pluck one unprotected player from each organization. With each team being able to protect either eight skaters and a goalie or seven forwards, three defenseman and a goalie, that means other teams aren't looking to acquire players at the deadline that they may not be able to protect and in turn, lose after only a couple of months in the organization.

The most attractive options at the deadline for teams will be veterans on expiring contracts who can help a playoff team and won't need to be protected in the draft. The Flyers actually could sell off a few viable pieces to teams looking to improve with a pair of forwards set to hit free agency, Scott Laughton and Michael Raffl, along with defenseman Erik Gustafsson, who can at least provide a powerplay boost to teams in contention.

While unlikely to be moved, Sam Morin, who has found more consistent playing time as of late, is also set to be a free agent and could have interest around the league due to his physical play. Brian Elliott could also be an option for a team in need of a backup.

In turning an eye to the future, becoming sellers also allows Fletcher to clear up some space in the lineup for Vigneault to play some of the young guys who haven’t had a real chance yet to showcase their skills. That includes 2019 first-round pick, Cam York, who recently signed his entry-level contract and will almost certainly be called up from the Lehigh Valley Phantoms this month. The University of Michigan native figures to be in the mix for next year’s lineup and depending on what he shows them this season, could find himself on the top pair with Ivan Provorov or teamed up with one of Travis Sanheim or Phil Myers. With the way things are, the Flyers could view April 19 as a viable timetable to bring him up. That begins a three day break — a great way to integrate him into the lineup through multiple practices — with 11 games to audition until season’s end.

Moving some of the forwards like Laughton or Raffl would also give Vigneault a chance to see extended run from guys like Carsen Twarynski and Tanner Laczynski, as well as someone who hasn’t donned the orange and black yet, Wade Allison. All three forwards will be in the spotlight next training camp as they look to crack a spot in the bottom six. Getting a longer look at some of these players against NHL competition would give Vigneault and Fletcher a better sense at what needs to be addressed in the offseason as they prepare for a new season.

Above all else, something has to change with this team. Many fans had high expectations going into the season after the way they finished the 2019-2020 campaign with a No. 1 seed going into the playoffs, and those visions of a Stanley Cup run were quickly warranted after their hot start to the season, but things went south in a hurry.

It could be a systematic issue. It may be a culture problem. That’s up to those in power to determine, but from the outside looking in, something is definitely off with the current makeup of the roster. That issue won’t be resolved in any move or moves that will be done at the deadline, but clearing away some veterans like a Raffl or a Laughton would signify to the rest of the players that change is coming.

To set up up a busy summer

That change will likely come in the form of a busy offseason. Selling off a few pieces by Monday would be the precursor for a bustling summer. Once the expansion draft comes and goes, and someone like James van Riemsdyk and his hefty contract are selected, Fletcher will more than likely look to ship away a few more pieces, both young and old and even some picks, in order to right the ship.

A big name like Jake Voracek would be a prime candidate as would someone like Shayne Gostisbehere, who was recently placed on waivers and ultimately cleared, to be moved. A player like Nolan Patrick who hasn’t lived up to expectations could also be packaged with a pick or a prospect.

Moves like these would be aimed at Fletcher finally filling the void on the top defensive pair for a player like Nashville’s Ryan Ellis while also clearing salary in order to be aggressive come free agency. This would allow the G.M. to bring in new veterans to mix with the infusion of youth likely to come in in an effort to return among the East’s elite once again following what’s been one of the more disappointing season’s in recent memory.