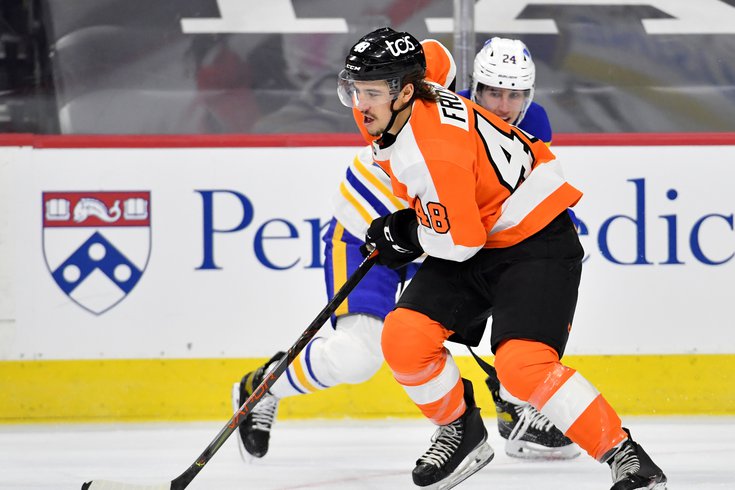 It really feels like the "good old days," huh? The Flyers are playing mediocre hockey, hovering around one of the last playoff spots in the Eastern Conference and many are frustrated that the team isn't a true contender.

At least that's what it feels like. The 2021 Philadelphia Flyers are an immensely talented hockey team, one that is relatively young and that has had to deal with more than its fair share of injury and COVID issues this season. There is every expectation that they'll be able to turn it on and succeed this spring, and that is in large part to them developing players in one of the best farm systems in the game.

In contrast to when we last checked in on Philly's top prospects a few weeks ago, their farm system is getting healthier, with Tyson Foerster, Tanner Laczynski and Isaac Ratcliffe back on the ice in Lehigh Valley. Players like 18-year-old Zayde Wisdom are breaking out for the Phantoms as well, while others are preparing for playoffs at their respective colleges.

Production seems to be down across the board, as the weird hockey season that is 2021 seems to be evident across the board, from the NHL to the AHL to college and overseas. As we'll do from time to time during the NHL season, here's a look at how the future stars of Broad Street are currently performing (the ranks are based on The Athletic's pre-season list):

It's a shame we have to start things off so negatively, but Philly's top prospect by every measure is Morgan Frost, and he was hoping a call up to the NHL club would keep him there for a long time before a shoulder injury paused that goal. Shoulder surgery could force him to miss the rest of the year after just two starts in 2021. A healthy return in 2022 will have him start the year atop this list again. Let's hope some luck finds him then.

York continues to trend in all the right directions, as his 18 points in 22 games with the Michigan Wolverines has him leading all defenders on the team — a school that is currently 11-9 in the ultra-competitive Big 10. York is a former first round pick and an extremely smart player with puck skills. He may be able to make the jump from college to the NHL extremely quickly when his time in Michigan is over.

Brink was the second-round pick the year York was drafted, and he's been struggling a little bit at the University of Denver, with a single goal and seven assists over 13 games and a -4 rating when he's on the ice. The teenager, who has been known to this point for his scoring prowess, will be starring as Denver preps to compete in the Frozen Faceoff this weekend.

Andrae was called a hidden gem by many when he was selected in the second round of the 2020 draft, and the recently turned 19-year-old has been bopping around different levels of hockey in his native Sweden. His production, down from 38 points in 40 games last year to 10 points in the same number of games, is less than encouraging, but his proclivity to find the penalty box seems to be less of a factor — his PIM are down from 82 last season to just eight in 2021.

He's a big, Russian blue-liner who made his American pro debut recently with Lehigh Valley. There are some real high hopes that he is close to being able to make an impact on the Flyers club, but he's not been a standout at all for the 6-2-2 Phantoms, boasting a single assist and no goals through 11 games as a pro in America. He's been okay on the blue line, with just a -2 plus/minus deficit.

This name might sound familiar — he's the team's first-round pick from this last draft and has been credited with one of the best shots in the entire draft. He is being fast-tracked, as a first-round pick should, and after an injury scare in his AHL debut, he's appeared in four total games and has netted a single assist. Take the good with the bad. Having a forward at 18 years old who is already in the AHL — that's a pretty good sign that the Flyers could be getting yet another influx of young home-grown talent in the next few seasons.

With 22-year-old Carter Hart the Flyers' franchise goalie, there isn't necessarily a high priority when it comes to finding a young No. 1 netminder right now, but that doesn't mean Ersson isn't extremely valuable to the organization. Playing over in Sweden, the former fifth-round pick has made a big jump this season boasting a .911 save percentage and 2.94 goals against average. At 21, it's possible he comes to the states sometime soon.

Allison is the third member of the Flyers' top 10 who is currently injured. The 23-year-old second-round pick from 2016 played all four seasons at Western Michigan and ankle surgery will postpone his pro debut. The Flyers are optimistic that, if he recovers quickly, he can be on the NHL radar soon.

Cates is a big lefty forward drafted in the fifth round who is, like Brink, prepping for the Frozen Faceoff. His team at Minnesota-Duluth will face Western Michigan Saturday night, where he'll be a key piece of the Bulldogs' offense. In 24 games during the regular season, the Flyers' prospect netted a respectable 17 points.

Rubtsov is an extremely talented scorer who has underachieved since being a first-round pick for Philadelphia in 2016. Injuries have kind of stalled his development — he appeared in four NHL games and a handful in the AHL. He is currently on loan to the KHL, where it is hoped he'll rediscover his first-round form. Good luck with that — in 46 games for Sochi this past season he has just 11 points, just three of them goals.