Ten numbers that explain the Flyers after 20 games 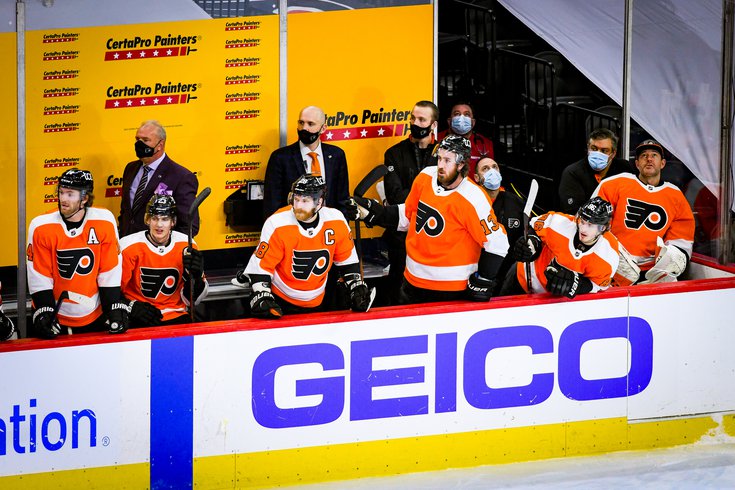 PHILADELPHIA, PA- JANUARY 13: Claude Giroux #28 of the Philadelphia Flyers watches play down the ice from the bench during the game against the Pittsburgh Penguins on January 13, 2021 at the Wells Fargo Center in Philadelphia.

It's been 20 games for the Flyers and there have been no shortage of storylines or memorable moments so far just over a third into the 2021 NHL season.

If nothing else, the Flyers are entertaining.

They've shown to be a team that can have you changing the channel in disgust — as well as screaming joyfully at the top of your lungs — and they can do it in the very same game.

The Flyers, as of Friday, have the second best chance of wining their division (+300, the Bruins are at +135) according to Unibet. They also have some fairly tantalizing Stanley Cup odds, boasting the seventh-best odds in the league at +1500. It's proof that even the oddsmakers are on the fence about how seriously to take Philadelphia this season.

So what kinds of conclusions can be made about this team so far? What can the numbers teach us about what their true potential is, or their strengths and weaknesses? We've found 10 very interesting stats that explain a lot about this team and, not surprisingly, for every good number there's a bad one lurking.

We would be remiss if we didn't start, first, with the Flyers' incredible comeback Thursday night against the rival Penguins. After giving up three first-period goals in what seemed like the blink of an eye, the Flyers (led by Claude Giroux's game-winning goal and three-point night) completed their first three-goal comeback since 2016. Sure, it is still relatively early in the 56-game season and it's just one game, but it certainly felt like something special happened in Pittsburgh that night. The Flyers are never out of a game and they know it. That's not something you can teach.

That's the number of Flyers players who have missed games (or forced games to be postponed) due to being on the COVID list. In a typical season, having injuries are one thing — and a thing that every team has to work through. In 2021, however, the Flyers have been disproportionately affected by the virus. Not only did they miss a week of games back in February because they didn't have enough players to field a full roster, but they've also had to deal with Travis Konecny, Oskar Lindblom, Scott Laughton, Morgan Frost, Jakub Voracek, Claude Giroux, Justin Braun and Travis Sanheim all being placed on the COVID list. The latest star player to be victimized is Joel Farabee, who missed Thursday's game due to COVID issues.

The Flyers have played fewer games than most teams this year so far (due to COVID issues), but they to rank fourth of all 31 teams in goals scored per game — 67 scored in 20 games. This is a very similar pace to that of last season, when the Flyers scored 3.29 per night en route to what would eventually be a No. 1 seed in the playoffs. It's also worth noting they've scored incredibly efficiently, with 12.4 % of their shots on goal finding nylon, the best in the NHL.

The Flyers have the fourth worst penalty kill in the league. There is little doubt that it's been due to their revolving door of personnel due to COVID. In addition, last year's best defensive forward — Sean Couturier — missed 10 games this year with an early season injury. Their penalty kill is substantially worse than it was a year ago, when their 81.81% mark was decent enough for 11th place. This year, they are leaving the ice unscathed after just 73.53% of short-handed chances.

The Flyers lead the NHL — yes, even having played just 20 games (the Canucks have played 27) — in high danger scoring chances that have lead to a goal being scored, according to hockey-reference.com. They have converted, in all, 18.7% of their high danger chances, the second best rate in the league and have 74 overall such scoring opportunities, a number that puts them in the top five of the league on a per-game basis. Being opportunistic is the best way to win hockey games.

Carter Hart has not been great this year and it's not entirely his fault. It's also not been a large enough sample size to really worry about the 22-year-old franchise goalie yet as he has started just 13 games. However, the netminder is second in the NHL, having lost three overtime or shootout games, which is a troubling statistic. One would hope that come high stress and critical situations, a goalie would rise to the occasion. We'll have more on Hart's struggles in just a bit.

Joel Farabee, who hopefully will have a speedy return from the COVID list, is second in the entire NHL with 10 even strength goals — one behind Austin Matthews of Toronto. He turned 21 eight days ago. So, you know, that's pretty good.

Remember a little while ago when we were high on the Flyers' and their 3.55 goals scored per game? Well, if your star goaltender is allowing more than that defensively you aren't going to win hockey games. Somehow, the Flyers have been able to overcome this, as many of Hart's worst performances have come in blowout losses. He has also played some very solid games (six quality starts including a shutout), and the Flyers have lowered their overall GAA with some fantastic goaltending from back up Brian Elliott. Still, Hart allowed 2.83 as a rookie and 2.42 last year. They'll need more of that as the season continues.

That's the number of power play strikes for James Van Riemsdyk, frequent linemate of Farabee. Those seven goals are the second most on the man advantage in the NHL, behind only Joe Pavelski of Dallas.

The Flyers, despite everything we've broken down (and more) still somehow have 27 points, a 12-5-3 record and the seventh most points per game in the entire NHL. There are so many things to be excited about with this team, and as was seen against Pittsburgh, if it all clicks it can be magical. Will they be able to get healthy and build some momentum during a very busy month of March? It's anyone's guess. But their record has them right in the mix for both a playoff spot and home ice advantage come postseason time.