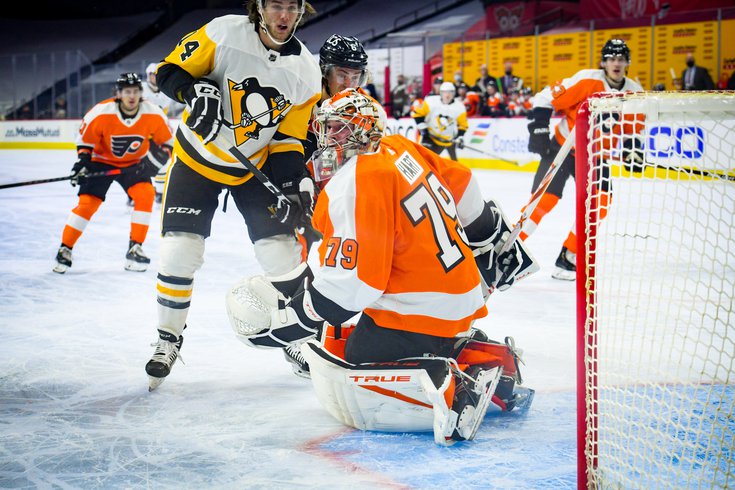 In a typical NHL season, March signifies the final push for teams hoping to solidify themselves into the postseason. The 2020-21 condensed season is anything but typical, leaving March as the middle point of the campaign. For the Flyers, though, the third month of the year will hold more significance as it features their busiest — and most challenging — slate of the 56-game season, one that could ultimately prove whether or not the team is a serious contender or still another year away.

For what it's worth, the Flyers currently hold +1600 Stanley Cup odds, the 8th best of 31 NHL teams according to Unibet.

Just how daunting is the task ahead? Following this past weekend’s back-to-back in Buffalo, the Flyers head into March with 17 games on the docket over 31 days. That is more than any of the teams jockeying for the top spot in the East with the New York Islanders playing 16, Boston at 15 and Washington sitting with 14 games in March.

Of their 17 contests, only eight of those will be at the Wells Fargo Center, which also won't be hosting fans just yet despite clearance to do so by the state. With so many games stacked up, the schedule-makers also tossed in three back-to-backs for the Flyers, one of which a result of the COVID postponements, and they won't have one break in between games that will be longer than one day. Are you feeling optimistic?

Why they can succeed

While the schedule at its core looks as intimidating as ever, the optimist can look at the fact that the Bruins won't be on the calendar at all until April. That means of the six teams they'll be facing in March, the Flyers confidently tout a 11-1-1 record against those opponents; the team is 0-3-2 against Boston this season, including a rough 7-3 loss at Lake Tahoe. Eleven of those games will also be against teams below them in the standings.

The Flyers are on a 3-game win streak since Lake Tahoe, back to back shutouts, and are 4-0-1 in their last 5 games indoors. Altogether, at 10-5-3, the Flyers' start - while sometimes against all odds - is mightily impressive

The trio of back-to-backs would be concerning for the majority of NHL organizations, yet the Flyers have fared pretty well when it comes to having no days off. The team is a perfect 3-0-0 in the second of their back-to-backs up until this point. The reason for their early success in handling these situations is largely due to their goalie room with Carter Hart and Brian Elliott, a duo that put together an impressive back-to-back shutout performance over the weekend in Buffalo.

The latter has won both of his starts when called upon on the second leg of a back-to-back and supports an impressive 5-1-0 record with a 2.03 GAA and .931 save percentage. Following Elliott’s win against New York in their first game home from Lake Tahoe, head coach Alain Vigneault reiterated the importance of having this luxury ahead of March and the ensuing 40 games over the final 73 days.

“With the way the schedule is laid forward, we are going to need two goaltenders," the coach said. "We are fortunate we have two good goaltenders that we trust.”

The second-year man behind the Flyers bench also referred to Elliott as “a force” for them, something he’ll likely tap into anywhere from 5-to-7 times in March, especially in those three back-to-back sets. Meanwhile, Hart has looked fine against everyone not named Boston this season with a 6-1-1 record, 2.37 GAA and .933 save percentage.

Among goalies with at least 5 starts, Brian Elliott ranks up there with the best:

*Also is tied for fewest losses (1) among qualified goalies

Perhaps more so than anything else, the Flyers are getting healthy. As soon as Sean Couturier left after two shifts in the second game of the season, the team has been hampered with injuries and COVID absences, but they are finally getting healthy and seemingly at the right moment. The importance of that is evident in how impactful Couturier and Claude Giroux were in their respective returns with each player netting three points in their first game back.

Couturier also is on a six-game point streak, tied for his career best, since returning. The team gladly welcomed back the likes of Jake Voracek, Scott Laughton, Oskar Lindblom and Justin Braun off of the COVID-list — three of those four netted a point in Saturday’s return. Considering how injury-riddled the team has been up to this point, the fact that the Flyers boast the record they do is mightily impressive.

Travis Konecny will be the next reinforcement to return after coming off of the COVID-list following Sunday's game. Last year's leading goal scorer will be traveling to Pittsburgh where he is expected to get back into the lineup during their three-game trip.

Why they could struggle

For the contrarian, things could get dicey pretty quickly with the overkill of games, particularly when it comes to the three back-to-back series. Their first set comes on the road in Pittsburgh followed by Washington at home. They then have a doubleheader on a New York trip two weeks after with the Rangers and Islanders. Five days later, another back-to-back pops up, this time at home against the Islanders and Devils.

With half of the games in those scenarios on the road and nine of their 17 games away from the Wells Fargo Center, the Flyers will have to prove they can win more on the road than they have in the past. The team is off to a better start this year at 5-2-1 this year outside of Philadelphia and 21-17-4 under Vigneault. With aspirations of a top seed in the postseason, the Flyers will need to play better than .500 hockey in those nine road games to keep themselves in position. Against the four teams they'll play on the road in March — Pittsburgh, Buffalo, Rangers and Islanders — they were 1-3-1 as visitors last season.

Considering the road travel and the lack of rest — and time for practice, for that matter — the Flyers could ultimately run out of gas at some point in March. Getting early leads will be imperative to the team during this 17-game stretch. The Flyers are 8-1-2 when scoring first and 7-0-1 when leading after the first period. That formula will be needed more so than ever with the amount of games that lie ahead. Falling behind in games, especially as the month drags on, could see those tired legs get a little heavier, making things difficult for not just the respective game but for the remainder of the month with little to no rest.

If those heavy legs do kick in at some point, hockey players can sometimes resort to sloppy play which leads to an increase in penalties. For the Flyers, staying out of the box is always important considering they rank 28th in the league in penalty killing, but will be even more crucial during this 17-game run to avoid straining themselves even more than the schedule will.

What I see happening

The Flyers are clicking right now. Throw out the Lake Tahoe game and the seven goals against on Carter Hart; this team is finding its stride, to no coincidence, as the team is getting healthy and coming off the COVID-list.

For all the talk about Carter Hart after Lake Tahoe and his Boston woes, he responded with a shutout. The kid has the goods.

Despite the schedule-makers doing the team no favors, and postponements not aiding their cause either, the Flyers have what it takes to not just weather the storm, but come out in a better position. With Boston not on the schedule for the next 17 games, the Flyers have a chance to exert themselves on the rest of the East Division and further separate themselves from the pact.

With their goalie tandem and the cavalry back in play, the Flyers should be able to pick up double-digit wins in March, potentially to the tune of an 11-4-3 mark, a run that would only boost them in the East standings and put them in the driver’s seat moving forward in April and May.