What we want to see from the Flyers down the stretch 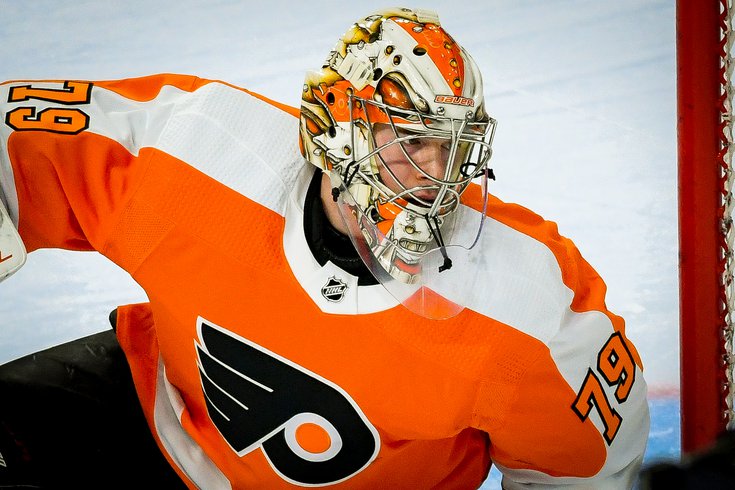 PHILADELPHIA, PA- JANUARY 13: Carter Hart #79 of the Philadelphia Flyers warms up before the game against the Pittsburgh Penguins on January 13, 2021 at the Wells Fargo Center in Philadelphia.

It’s a realization that no fan ever wants to admit: your team isn’t making the postseason.

While there’s always years for teams where making the playoffs never seems like a realistic expectation, for the Philadelphia Flyers, the 2021 season was one with lofty goals. Those expectations were backed up through the early portion of the season after a fast start, but quickly crumbled once the calendar turned to March. Now, with just 11 games remaining, Flyers fans have come to the realization that it’s just not going to happen this season (they are back by nine points to the Bruins for the last playoff spot in the East).

With that acceptance comes the next step: turning an eye to the future. When the playoffs become unattainable, all eyes turn to the next campaign. Before completely turning the page on this season, there are some key things that fans are hoping to see in this final stretch.

Here are six things that Flyers fans would like to see before the conclusion of this disastrous season.

There’s no sugar-coating it for Hart. This has been a downright embarrassing season for the 22-year-old netminder. Among goalies with at least 25 starts, no one has a lower save percentage (.877) or higher goals against average (3.67).

Hart’s defense has been anything but reliable this season, so when he’s been down, he hasn’t had much help getting out from the hole he’s dug. Nonetheless, Hart remains the future of this team and if the Flyers are going to right this ship and ensure this season is an anomaly, it’ll be with Hart regaining his old form. While this season is all but over, Hart would benefit heading into the offseason knowing he ended on a high note.

He’s off to a good start in doing this having picked up his first win since the middle of March with a 31 save victory on April 15 in Pittsburgh. It was his highest save total since Feb. 18. Stringing together more games like that over the final few weeks would jumpstart his 2021-22 rebound.

Having become a popular player well before he ever stepped onto an NHL rink, Allison didn’t take long to make an impact at the highest level. An always bubbly-personality and someone fans instantly gravitate to, Allison has looked like he belongs in his first two career games in the orange and black.

This is great news for him and the organization, and the 2016 second round pick will have 11 more games in the lineup to prove that he not just belongs now, but belongs in a permanent spot going into next season. Where he fits into the lineup will be a question, but early on, it looks like he can play anywhere from the second line down. He has a skillset that this team has been lacking a bit, with a gritty, yet skillful approach on the offensive end. The Western Michigan product also has already received time on the power play, even scoring his first goal on the man-advantage.

This one remains a wait-and-see for Flyers fans. York is the most highly-touted prospect in the pipeline and one that could, presumably, fix a serious issue. The 20-year-old was selected 14th overall in 2019 and has a list of accolades, including being named the captain of the 2021 U.S. National Junior Team that upset Canada to take home the gold.

Two weeks ago the Flyers signed York to a three-year entry-level contract. What made the deal interesting was that it begins this season, rather than pushing it off until next season with an amateur tryout. By skipping that process, the team is saying it would rather lose that extra year of protection in order to get an up-and-close personal look at him before this season ends. While he hasn’t been called up yet, it’s apparent that York will be making his debut sooner rather than later. This three-day break seems like an ideal time to get York some practices with the team and prepared for his NHL debut. If York isn’t in over his head whenever he first hits NHL ice, general manager Chuck Fletcher will have a much clearer picture of what his defensive pairs will look like next year.

Flyers fans were sent into a tizzy when the team placed Shayne Gostisbehere on waivers near the end of March. The Florida-born defenseman and his high cap number cleared, meaning he remained in the orange and the black but had a bit more flexibility in the organization. While risking another team grabbing him, Fletcher did show his cards a bit that Gostisbehere is someone he may look to move this offseason.

After one of the most disappointing seasons in recent memory, Fletcher will have his first real test as the team’s general manager. In looking to clear cap space, Gostisbehere makes a lot of sense. At this point, Fletcher just needs him to continue playing at the level he is now and build up his trade value. While many of the team’s young defensemen have been struggling, Gostisbehere has been one of the most consistent players on the team, especially with his scoring production. The 27-year-old has just 15 points this season, but it is fifth among all defensemen that have played 35 games or fewer.

Cooling off a bit over the last month, Farabee’s second season has come to a bit of a halt. While he remains fourth on the team in scoring with 31 points over 44 games, Flyers fans would love to see him get on a little run before the season ends. The 21-year-old has already begun to show some signs of coming out of his funk with three points over the last five contests.

What Farabee showed earlier this season — and to a degree, throughout this entire campaign — is that he can be an offensive playmaker for this team for year’s to come. Where his potential maxes out, though, remains to be seen and is something that all Flyers fans hope is even higher than he’s showed in his 58-point 82-game pace. The continued growth of the Syracuse native is pivotal for this team as they look to build around the youth in guys like Farabee and Travis Konecny.

Above all else, fans just want to see this team not give up. There have been signs of players not giving it their all on occasion over the past few games, particularly in the last two beatdowns by Washington by a combined 12-4 in two of their last four games. The other two contests, one against Pittsburgh and the other on Sunday versus the Islanders, have been different stories with the players showing heart and that they still have some fight in them.

Fans are frustrated with where this season went beginning in March. That has continued in the first half of April. With 11 games to go, fans just want to see the players show that they care. That doesn’t necessarily have to equate wins — as some fans wouldn't mind jockeying for a higher draft pick — but rather playing hard each game and giving guys like Hart, Allison and the young defensemen something to build off of going into the offseason.