The Flyers' defense has been reborn, and so has assistant coach Mike Yeo 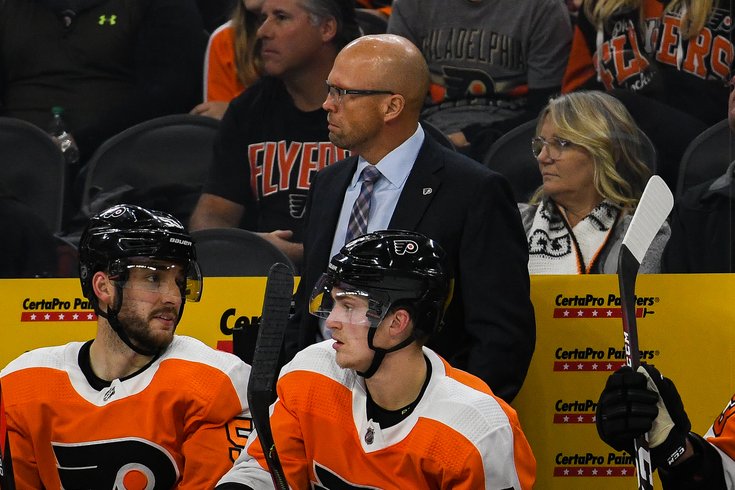 Mike Yeo is reportedly out as head coach.

The dichotomy of it makes perfect sense to Mike Yeo. One moment, the 46-year-old hockey lifer from North Bay, Ontario, is being told on a Monday night that his job is over in the darkened bowels of the St. Louis Enterprise Center. The Blues only went on to win their first Stanley Cup under former Flyer/former Flyer head coach Craig Berube.

The next moment, Yeo is fishing on Lake Erie on a sunny April weekday when a call came about his hockey life receiving a rebirth.

It’s paid dividends for both Yeo, working with the defense and the Flyers’ once-anemic penalty kill unit, and the Flyers. Here's a look at some key numbers:

• Overall defensively, the Flyers are tied for seventh in the NHL with Columbus in goals-against (2.82 goals-against-average) after 38 games. They were giving up an average of 29 shots per game, which is third overall in the NHL behind only Los Angeles and Carolina.

Yeo’s played a major part in the transformation.

He certainly believes in second and third chances.

“Last year was not fun,” Yeo admitted. “We’re in this business to win, and you obviously spend a lot of time second-guessing and questioning what you could have done differently. It allows you to settle in and it allowed me to re-evaluate myself and look at the areas that I really needed to improve.

“As difficult as it was, down the road, it will be a real big part of defining who I became as a coach. I think there is a sort of misconception out there that we are who we are, but I think we’re always trying to evolve and try new things and grow. We’re doing these things in the locker room in the greatest league in the world, and sometimes it’s on display, and sometimes it’s behind the scenes.”

This season, the Flyers are transitioning into a contending team with a system under new head coach Alain Vigneault and Yeo’s defensive schemes.

“Mike is a detail guy, who’s realistic, too,” said Flyers’ veteran defenseman Matt Niskanen. “He has details that he wants to see his defensemen try to do; with certain habits and certain reads in certain situations, but he also understands that there are certain hockey plays that need to be made.

“There’s a lot of wiggle room and a lot of gray area in hockey. The game is not as black-and-white as other things. As for positioning, it’s a lot of what Mike does and it’s the most challenging for a coach. You have to be consistent with your messaging, and getting everyone on the same page right away. Mike is good at that. We’ve adapted pretty quickly. It’s taken about 20 games, but guys react more instinctively now to (Yeo’s system).”

Yeo is just happy to get this chance.

A lot was expected from the St. Louis Blues last year. Yeo was handed the keys to a Ferrari.

But after a 2-0 loss on Monday, Nov. 19, 2018, to the Los Angeles Kings, then the worst team in hockey, Yeo was told after the game that he was fired. The Blues had dropped to 7-9-3 and Yeo had a feeling something was coming by the way St. Louis, which was expected to contend in the Western Conference, had underachieved.

He wasn’t completely blindsided when the news came — but still, it hit hard. We sometimes forget in professional sports that there are families involved. Wives and children hear news like that.

“That was the most difficult part, and I was thinking about interviews for other coaching vacancies, but I just wanted to go back to work with good people and grow and win,” Yeo said. “Chuck Fletcher (the Flyers’ general manager, who worked with Yeo in Minnesota) called in April, just after Alain was hired. Chuck wanted to see if being an assistant coach was something I would be interested in and that came with an immediate ‘Yes!’

“The next step came from Alain about a week later, because he was heading to Europe for the world championships. Obviously, I wanted to make sure Alain was comfortable, and I thought things went well, and I was really excited.”

It says something about Yeo.

He went from a point of derision in St. Louis to being on Vigneault’s staff with a promising young team.

“It lifted me, it did, because you feel good when you’re chosen by someone like Alain,” Yeo said. “It’s hard to put it into words. I can’t wait to get to the rink every day, because the players have bought in. We’re seeing progress. This is going to take time. Everything good does. It’s very motivating when you start to see a chance of winning the Stanley Cup.

“We want to defend as a five-man unit, and we want everyone to play the right way with and without the puck. You can’t shut teams down if you just have six good defensemen. You have to have everyone play within the system, and we feel really strongly the way our defensemen are playing.”

Vigneault never worked with Yeo before, though he came highly recommended by Fletcher and Michel Therrien, the other Flyers’ assistant coach.

“Once I spoke to Mike and told him what he’s getting into, he was excited about the opportunity,” Vigneault said. “Mike is a great person and a great coach. Whether it was going to be from us, or from someone else, Mike was going to coach somewhere else in the NHL.

“I’m happy he was available and Mike knew Chuck. His rapport with our players and that combined with the info he’s given us on the PK (penalty kill) has been huge for us. We have to make sure we continue it.”

Yeo is back in his element. Back to early-morning practices. Back to coaching and advising where he feels needs are defensively, and standing once again behind an NHL bench.

“There are always ups and downs in your life, and when you have an opportunity like this, you want to enjoy it,” Yeo said. “Yes, I’m a firm believer in second and third chances. You want to get better and it’s our job as coaches to always get better—and more importantly, make the players we work with better.

“That was a great call. I did well that day fishing, too.”