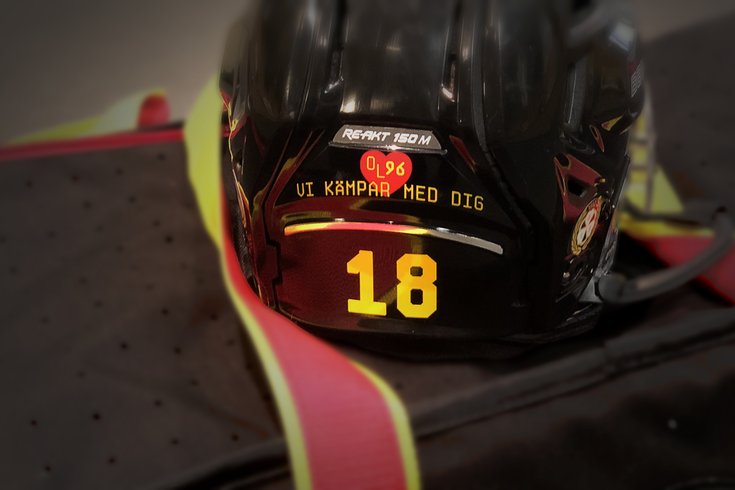 Fans of Brynas IF, a hockey team in the Swedish Hockey League for whom Lindblom played more than 100 games, showed enormous support for the Flyers forward's fight against cancer.

The Flyers announced over the weekend that forward Oskar Lindblom had been diagnosed with Ewing's sarcoma, a rare form of bone cancer, and is out for the rest of the 2019-20 season.

On Tuesday, fans of Brynas IF, Lindblom's former hockey team in the Swedish Hockey League, showed enormous support for Lindblom at a game.

Fans in the crowd held up a huge (and profane) pair of banners in support of Lindblom's fight against cancer:

And players for Brynas IF wore a decal on the back of their helmets with Lindblom's initials, his No. 96 from his time with Brynas IF, and the phrase, "Vi kämpar med dig," which translates to, "We fight with you":

Lindblom, 23, played in 141 games for Brynas IF from 2013 to 2016, and then again during the 2016-17 season, scoring 38 goals and adding 49 assists. Lindblom also hails from the same city, Gävle, as Brynas IF, meaning he was essentially a homegrown talent who played for the hometown team before he headed to the NHL and made it big in the world's best league.

MORE: The Phillies are better, but still not better than their NL East competition

Lindblom was playing his third NHL season with the Flyers after being drafted in the fifth round of the 2014 NHL Entry Draft. He had been having the best season of his young career, with 11 goals and seven helpers in 30 games.

The young forward was in attendance at the Flyers' practice Tuesday:

And the Flyers organized an arena-wide #OskarStrong event, to show support for Lindblom:

Lindblom has seen, and will undoubtedly continue to see, an outpouring of support from the hockey world and the Philly area as he continues his fight.