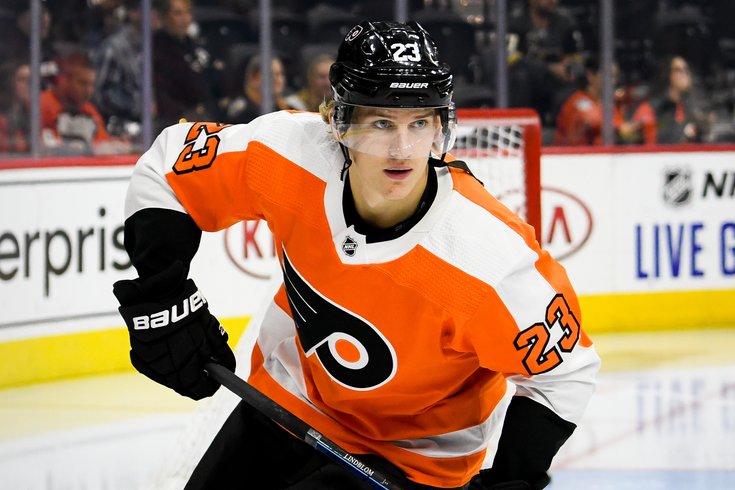 Oskar Lindblom skates during warmups at the Philadelphia Flyers game against the Vegas Golden Knights at the Wells Fargo Center in Philadelphia on October 21, 2019.

The Flyers released this statement Friday about Lindblom's diagnosis:

"Philadelphia Flyers forward Oskar Lindblom has been diagnosed with Ewing's sarcoma by leading specialists at the University of Pennsylvania. He will undergo further testing and evaluation next week and begin treatment immediately thereafter. He is not expected to return to play for the remainder of the season. The Flyers will do everything possible to support Oskar and assist him in securing the best care available. Out of respect for Oskar and his family, the team will have no further comment at this time and asks that Oskar be afforded a period of privacy so that he may focus his efforts on his treatment and a return to full health."

Lindblom, 23, is in his third season with the Flyers since being draftedby the team in the fifth round of the NHL Entry Draft in 2014. Through 30 games, Lindblom was having the best season of his young career, tied for the team lead in goals with 11, along with seven assists.

According to the Mayo Clinic, Ewing's sarcoma is a rare form of cancer, which can occur in any bone, but often begins in the bones of the pelvis, legs, or arms (https://www.mayoclinic.org/diseases-conditions/ewing-sarcoma/symptoms-causes/syc-20351071).

The sarcoma was discovered in Oskar Lindblom's upper body.

The National Institute of Health says the disease is most common in children and young adults, diagnosed in roughly 250 children each year.

Lindblom received an outpouring of support Friday from the hockey world, the Philly area, and the sports world at large:

We’re with you, @oskarlindblom. ❤️

Sending lots of love and support to @oskarlindblom and his family. We’re all behind you brother! #oskarstrong

We, along with the rest of #Philly, are fighting with @oskarlindblom & the @NHLFlyers 🧡 https://t.co/UXfQSNH62e

The entire NHLPA staff and players are with you, @oskarlindblom and wish you a full recovery.

@oskarlindblom You are a warrior and all of your fans and friends here in Philly are with you. You’ve got this, believe. #survivor