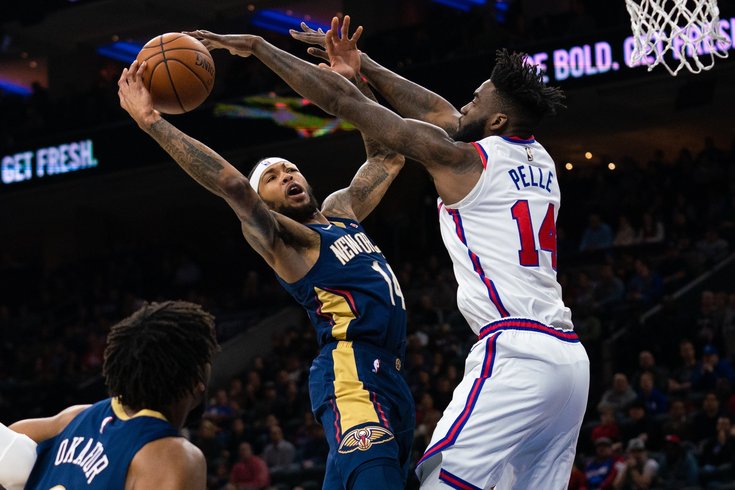 The Sixers looked like a team on the second half of a back-to-back playing an opponent they didn't respect a whole lot, and the good news for them is they had enough talent to win anyway. Philadelphia took care of business to stay undefeated at home, winning 116-109.

• Playing inexperienced big men usually comes with a lot of pain. Norvel Pelle is not immune to the habits that get most young guys relegated to bench duty, and he picked up fouls at an alarming rate when he got some burn on Friday night.

But my lord, did he come up with some ridiculous blocked shots against the Pelicans. It was a sleepy start in South Philly, and Pelle brought the whole building to life with his emphatic block of Brandon Ingram's dunk attempt.

Norvel Pelle out here putting all of New Orleans in a body bag pic.twitter.com/8bCyNHq6i4

The surprising thing about his performance was Pelle getting a chance to play minutes ahead of Kyle O'Quinn in the first place, who presumably brought in specifically for games like these with one of their top two centers missing.

But with the Sixers badly in need of energy on the second half of a back-to-back, Brett Brown was willing to live with the mistakes, and I think that turned out to be the right call. Pelle brought the Sixers back to life in the middle of a bad lull in the third quarter, and it was the springboard for them to eventually run away with the game.

• One of the driving forces behind Tobias Harris' recent surge has been his habit of bullying any player who clearly isn't strong enough to guard him. In Boston on Thursday night, it was Jayson Tatum who was physically punished by Harris on drives and in the mid-post, and early on Friday night, it was Kenrich Williams, who looked like he was hanging on for dear life every time Harris decided to go at him. The victim turned into Brandon Ingram late in the game, with Harris getting where he wanted and when down the stretch.

That's not to say he strictly overwhelmed the Pelicans physically — Harris made some tough, skilled finishes in traffic and showed off his touch, playing with the same aggressive mindset that powered him to a big second half against the Celtics.

He did have a bit more trouble than he has recently on the defensive end, and that was a product of the matchup. Chasing JJ Redick around screens is a tough, thankless task and Harris' off-ball tracking is probably the weakest part of his defensive game as it is. But his offensive contributions far outweighed any mistakes he made on the defensive end, and he just continues to chug along, putting up solid performance after solid performance.

• The Pelicans decided to stick Jrue Holiday on Ben Simmons for a lot of Friday night's game, and he responded to that challenge much better than he did when the Celtics stuck Kemba Walker on him one night prior. Simmons made it a point of emphasis to take Holiday down on the block and post him up, and that had some explosive results for Philly.

And Simmons was a lot more aggressive across the board, pushing the pace and making a concerted effort to get to the rim against a Pelicans team that doesn't have the athletes to guard him (at least with Zion Williamson on the shelf). He missed a couple of makeable layups after getting a step on his defender, but he played with the right mentality, and I'm sure the coaching staff will live with the misses that came as a result.

We have to zero in on his defense for a bad reason for once, however. Some of Simmons' old habits on the defensive end crept back in on Friday, with Simmons outright mailing some possessions in against the Pelicans. Holiday had the opportunity to shoot some wide-open threes because Simmons stood flat-footed in the middle of a possession, something he has done well to weed out of his game over time.

Even with those lapses, Simmons came up with a handful of hustle plays and turnovers forced on Friday night. He has set a high bar for himself on that end.

• James Ennis gave the Sixers some desperately needed punch off of the bench on Friday night. He played limited minutes against New Orleans, but he made some huge shots in both halves and came up with hustle plays on a night where the Sixers weren't doing much hustling period.

If he could have just cut down on the fouling, he might have really been on to something.

• This looked like a game the Sixers were going to run away with after a strong first quarter, but some bad habits crept in when they should have been burying their opponent early. A severe lack of urgency, some sloppy passes, cheap fouls, all of it added up to the Pelicans creeping back into the game.

The Sixers still can't seem to find the same urgency they come up with against good teams when they have an inferior opponent, whether they're at home or on the road. They're not grinding themselves into dust playing this way, so maybe it'll save some gas in the tank for the playoffs, and they were on the second half of a back-to-back without a key member of the starting lineup. But they could do that by blowing crappy trams like the Pelicans out as they're supposed to.

• I think it's fair to say that the bloom has come off of the Furkan Korkmaz rose. He rode a tidal wave of momentum after hitting a game-winning shot in Portland early in the year, but the positive contributions are coming few and far between at this point. They need to find a better option in the rotation.

Truthfully, the solution should come from Josh Richardson finding his footing and sopping up more minutes for the Sixers, shrinking the backup wing rotation down to Matisse Thybulle and Ennis. But that looks like it might take a little time, at least if they want him at the level he was playing at pre-hammy issue.

Korkmaz getting beat up physically is something he can't really help, but he's adding needless mistakes to the mix now, too. Taking a contested three with nine seconds left in the first half and the shot clock turned off is a pretty pointless exercise, and the Pelicans took the runout that followed and ended up scoring a cheap two before the half ended.

• Joel Embiid certainly came out with the right approach on Friday night, attacking a set of Pelicans bigs who aren't well-equipped to guard him on the low block. But the crispness to his game was not quite there on offense on Friday, and he fell in love with the jumper a little too much for everyone's liking.

On the positive side, he kept the turnovers down in spite of some aggressive double (and sometimes triple) teams from the Pelicans, who responded to his early post exploits by daring anyone but Embiid to beat them. It would have been nice to see him tear apart guys like Jahlil Okafor and Jaxson Hayes, who he is more than capable of destroying on the low block, but that wasn't necessarily the right approach against the coverage Philadelphia's center was up against.

• Richardson is still trying to find the offensive form he had before he left the lineup with a hamstring issue, and until he's back in fighting shape, it's tough for a team devoid of creators to get buckets down the stretch.

Richardson did play a pivotal defensive role for the Sixers in crunch time. Redick found it much more difficult to get free when the Sixers shifted Richardson onto him late in the game, and that forced them to try to get themselves back into the game at the free-throw line, rather than bombing away from three. In a game that ended up being tighter than it should have been, that made a difference.

• My god, how many free throws can one team miss in the end stages of a game? Simmons missing them is not all that surprising, but Embiid was brutal by his standards, and Richardson missed a pair that should have begun the process of putting the game on ice. Everyone had to sit through an ugly slog at the end because of this, so great job by the whole crew here.

• I still tend to think hacking Simmons late in games is a losing proposition. He's not a good free-throw shooter, but when you send him to the line over and over again, he appears good enough at finding a rhythm to ruin the strategy.

The fact that teams feel it's a viable strategy is not a great reflection on Simmons, of course, and the constant crunch-time questions surrounding him are not getting any more interesting or fun to talk about.

• Watching Okafor spin harmlessly into Embiid's chest and force up a harmless miss from 10 feet is a reminder of how far this team has come in just a few short years.

• The Sixers could really use a bench weapon like Redick. Wonder where they could find one of those guys between now and the trade deadline.